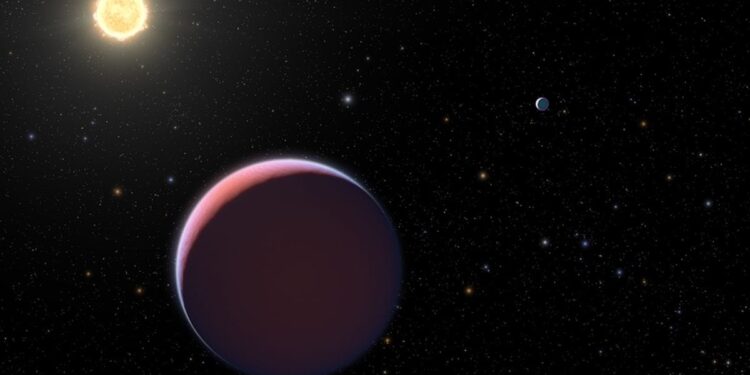 In a recent discovery, astronomers have spotted an exoplanet or super-Earth that is four times the size of our planet. The exoplanet Ross 508 b orbits a red dwarf star called Ross 508. Although the star is only 36.5 light-years away, it is too dim to see with the naked eye. Astronomers have noted that the planet is in the habitable zone of the host star. The findings are part of the study titled “A Super-Earth Orbiting Near the Inner Edge of the Habitable Zone around the M4.5-dwarf Ross 508”.

The study has been accepted for publication in the journal Publications of the Astronomical Society of Japan. The planet, Ross 508 b, orbits the star at a distance that provides temperatures conducive to the formation of water on the planet’s surface. This indicates that Ross 508 b is in the star’s habitable zone.

But just being in the habitable zone doesn’t mean the planet will support life. Even Mars is within the Sun’s habitable zone, but it still can’t sustain life. Taking into account the planetary mass limits, Ross 508 is likely a terrestrial or rocky rather than a gaseous planet.

Researchers were able to see the planet near a dim star using the Subaru telescope at the National Astronomical Observatory of Japan (NAOJ) in Hawaii. Because the star is smaller than our sun, Ross 508 b orbits it every 10.75 days. In addition, Ross 508 is significantly faint and thus Ross 508 b experiences 1.4 times the solar radiation witnessed by Earth.

The Ross 508 is 18 percent the mass of the sun, making it the faintest and smallest star orbiting the world discovered using radial velocity. The radial velocity method or the wobble or Doppler method is one of the techniques used for finding exoplanets.

The techniques used for locating exoplanets are more effective at finding the giant worlds such as gaseous planets orbiting at a distance too hot for liquid water. Locating other types of planets is considered more difficult by astronomers.