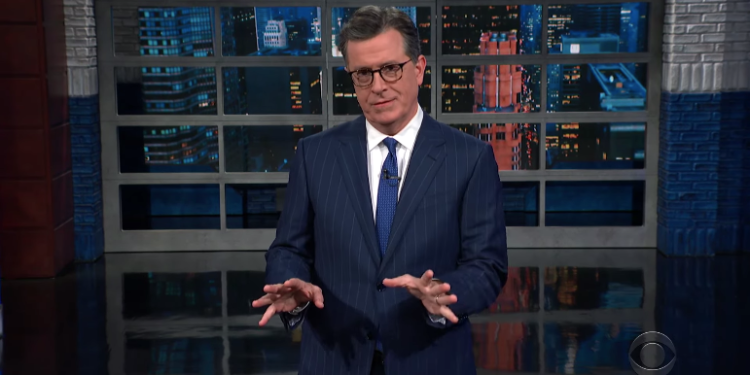 “There are many reasons why things are going so badly. The Russian troops have no clear target, the troops are running out of food and it turns out they have really bad technology. For example, while most modern military radios are impossible to intercept, many Russian troops communicate via unencrypted high-frequency channels that anyone with a ham radio can eavesdrop on. To which Russian soldiers said, ‘A radio made of ham? Can I have one? I am so hungry!'” —STEPHEN COLBERT

“Now the Russian walkie-talkies are bombarded with heavy metal music from Ukrainian operators. Okay, that’s not bad, heavy metal, but if Ukraine really wants to mess with Russian soldiers, they’ll have to flood their walkie-talkies with an unbearably long podcast. —STEPHEN COLBERT

“But Vladimir Putin may not know how badly his invasion is going, as new information suggests his advisers misinformed him about Ukraine. Well, Putin is clearly the victim of his own pro-Russian propaganda. He doesn’t even know that Russia lost ‘Rocky IV.’ —STEPHEN COLBERT

“Intelligence officials are said to believe that Russian President Vladimir Putin has only recently learned how badly the invasion of Ukraine has gone and is angry with his military advisers. And you can tell he’s upset because now the table is even longer.” —SETH MEYERS

“First he said on a podcast that they did cocaine for him; now he says he thinks he saw an employee in a parking garage 100 yards away. How crazy are you to stand in a parking garage and see someone leaning over to pick up their keys and thinking, ‘Oh, that’s like another cocaine orgy’?’—JAMES CORDEN