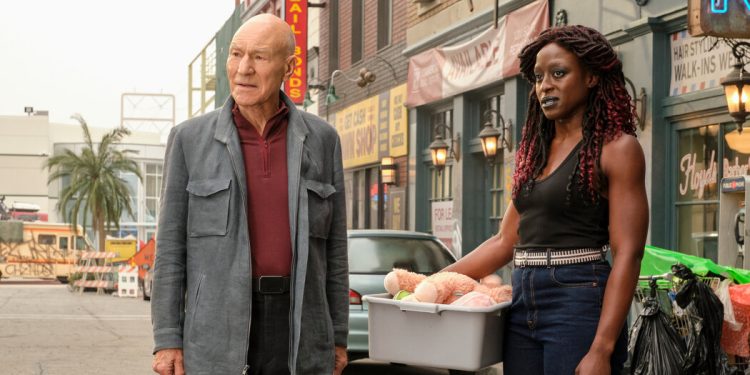 The first half of the “Picard” premiere season started off with a strong premise. The second half of the season was where the storytelling started to derail. There were clunky plot decisions meant to justify previous decisions at the expense of their own will.

After the fourth episode of the second season, I’m afraid we’ll go down a similar path.

I especially struggled to get past Young Guinan.

Let’s say a few things: Let’s accept that Q has somehow altered the timeline so that it makes sense that Guinan wouldn’t recognize Picard in 2024. (This is despite Guinan meeting Picard in one of the most famous “Trek” episodes, “Time’s Arrow”, way back in the 1800s.) Or whether this is part of a different timeline, as established by JJ Abrams’ “Star Trek” in 2009.

I’m not exactly sure how this would happen, but timeline plots are always vague. And one can suspend disbelief if the story is good enough. There is also the history of Guinan with Q, which is not covered here.

The Young Guinan presented to Picard here is a completely different Guinan than the one we’ve seen in “The Next Generation” for decades, to the point of being a total distraction. Why wouldn’t Guinan, who immediately realized that something was wrong in the classic episode “Yesterday’s Enterprise”, not realize that something was wrong in this timeline? El-Aurians have a special intuition, we’re told. They are known as “listeners” and Guinan doesn’t want to do that here.

There is also the defeatism of Young Guinan. In this timeline, Guinan is pessimistic, bitter, and unwilling to help Picard until much later. Historically, that was not Guinan’s jam. She is attentive, reserved – even mysterious.

Given Whoopi Goldberg’s schedule, it was unlikely the show would get her to reprise the role beyond the cameo she had a few weeks ago. But she has played an iconic part in the lore of “Trek” – to completely change what made the character so beloved over several decades, felt rushed and undeserved.

From their first conversation, when Young Guinan said to Picard, “I don’t know you. I don’t want to know you,” it was clear we weren’t dealing with the same friendly bartender we’ve come to know. That she would threaten a polite, well-meaning Picard with a gun was even more surprising. She even refers to Picard as “old man,” which was an especially odd line considering Guinan is significantly older by hundreds of years, which is something she refers to later in the episode.

Even reaching Young Guinan is a journey in itself. At the beginning of the episode, we follow Seven and Raffi’s search for Rios and encounter more unmistakable political commentaries. Deportations without due process. A government bureaucracy hostile to immigrants. (There’s a point where a doctor points to the Immigration and Customs Service detaining detainees longer than they should, and Seven suggests the government deserves a subtle comparison to the Borg.)

Picard goes with Jurati to Chateau Picard. We learn that during World War II, Picard’s ancestors hid from the Nazis in the tunnels below the residence, and that the residence itself was used as a base for the Nazis. It’s an interesting bit of backstory to introduce to Picard’s lineage and hopefully more will be explored in the – ahem – future.

Here, Picard deduces that Jurati has a sudden special fascination with the number 15. (Nice reference here: Jurati says, “Look at you, Dixon Hill,” a recall of a fictional detective that Picard played on the holodeck with Guinan.) Picard is probably more attuned to these characters anyway, as a result of what he went through in the episode “Next Generation”, “Cause and Effect”, when Data realizes that the repetition of the number three was relevant in preventing a catastrophe and bringing Kelsey Grammer into the “Trek” universe.

The cutest reference of the episode – and possibly the entire series – comes when Seven and Raffi are on the bus and a man with spiky hair plays a boombox at an unreasonably loud volume. Seven demand that he stop and the man apologizes – a different outcome than the same scenario in ‘The Voyage Home’, when Spock pinches a similar man in the neck.

Later, Seven and Raffi give “Trek” fans one of the first chases in the franchise’s history. †Remember the one with Picard who drove “Nemesis”? OK, never mind.) I have no idea how Seven could drive a car so well, but then again, Scotty was once able to come up with transparent aluminum on an ’80s Macintosh in a jiffy.

The Borg Queen does her best to manipulate Jurati, which makes sense. Jurati, brilliant as she is, is the crew member most prone to brain games. (Note that she killed someone in season one, partly as a result of manipulation.) This seems like an evolving storyline this season: Will Jurati succumb to the temptations of the Borg, where she doesn’t need emotional contact with herself? Where she can focus on being relentlessly efficient?

Jurati’s coordinates lead Picard to Guinan In Name Only, who is appalled by the privileged people who own many of the world’s resources and are “killing the planet,” she says. She is on her way to leave Earth until Picard knocks her over.

When Guinan asks for his name, he replies, “If I say more, I risk jeopardizing your path.”

“You might have thought of that before you started harassing me in my bar,” Guinan replies. This is a valid point. Picard knows that Guinan has (had) special abilities. Why would you tell her some things and not others? He’s endangering her path anyway, and he did in “Time’s Arrow.”

As has sometimes happened in “Picard”, the plotting here completely ignores character history. Guinan tells Picard that as a dark-skinned being, she doesn’t have the luxury of being patient with humanity, another unsubtle comment about the world we live in. (It felt a little forced here.)

Seven and Rafi can be carried out of the car to rescue Rios. The poor cop, who may be wearing a body cam, is shocked to see her suspects disappear out of the blue. (The revelation that aliens can teleport is sure to shake up Earth.)

Ultimately, this episode left me feeling like I was falling short. It was disappointing that after an entire episode of her defiance of Picard’s pleas, Guinan’s entire goal was to set up Picard with The Watcher – especially given her history with Picard. That bartender in 2024 could have been anyone.