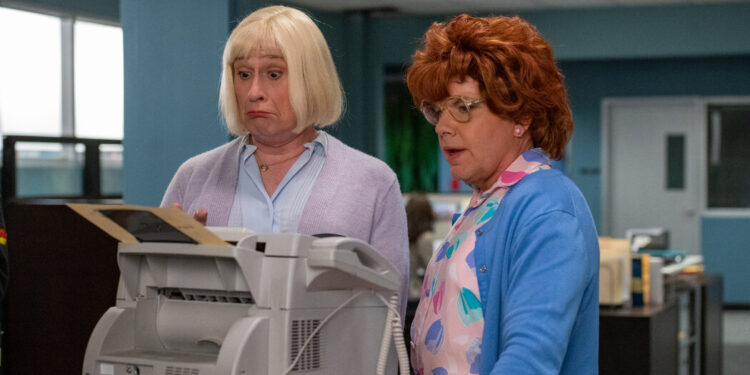 There are some reprises and callouts: the head crusher returns, as does the Eradicator’s self-proclaimed squash-playing menace. Buddy Cole makes particular sense when he’s matured into a regal older gay — as Thompson said, he envisioned the character decades ago — and both of Thompson’s signature queens reappear in a sketch in which Her Majesty dedicates a bold monument to Buddy’s beloved old bathhouse.

Sometimes the new bits lean too obviously on the aging jokes, like a painful sketch about 60-year-old male strippers. (There is a healthy amount of nudity in season, deployed more profitably in other segments.)

But the most surprising thing about the season is how much it tries to develop the children’s comedy and take it in new directions. This isn’t just the “The Kids in the Hall” the group would have made had it continued for a sixth season in the 1990s. (They briefly reunited for “Death Comes to Town,” a comedy series that was made, according to the documentary, when Thompson was gravely ill with cancer.) Once the five were gleefully riotous kids, they’ve become friendly comedic hitmen.

Some of the best sketches, be they foolish or savage, have an air of horror. Foley plays a morning radio host five years after the apocalypse, spinning Melanie’s 1971 earwig ‘Brand New Key’ over and over, contrasting his merry chatter with his dead eyes. A Shakespeare enthusiast would wish his bust of the Bard to come to life, and it does – horribly, because it has no arms or torso.

And in the dreamy, expressionistic “Flags of Mark,” McKinney spins a fantasy about his devoted friends who use flags—depicting him riding a dolphin under a rainbow—to find each other amid a faceless, masked crowd while his disembodied face hovers above them, laughing at their devotion and sorrow. It’s a funny portrait of selfishness and a sort of book end of McKinney’s famous early character: he doesn’t crush your head, his head crushes you.

Depressingly often lately, seeing your favorite comics in years means seeing them turn insane, repeating themselves, and whining that no one can take a joke anymore. But for the most part, the group handled aging well — maybe because they were always a little ahead of its time, maybe because the comedy always had more than the usual memento mori quotient. (After all, the closing credits of the show’s original run was when the quintet was buried in a communal grave.) Even punks get old. But you never stop being a child.