The State of the Union: Together, if only for a few minutes 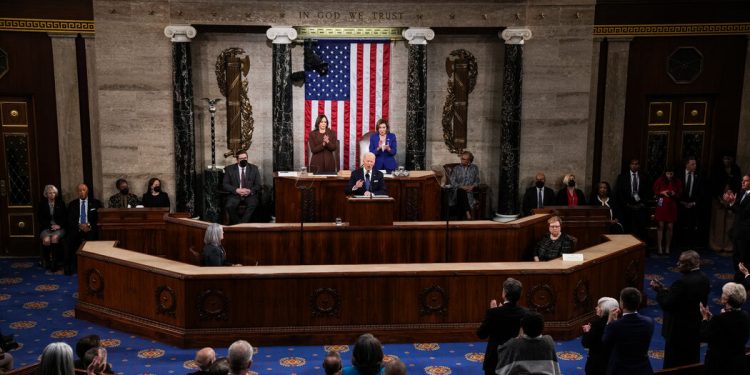 When he took office, President Joseph R. Biden Jr. likely that a year later he could begin his first State of the Union address with an inspiring exhortation about a united country that rejects authoritarianism, standing ovations and waving flags from both sides of the congressional corridor.

On Tuesday night, he did just that. But the united country he spoke of was Ukraine, united for the horrific reason of its brutal invasion of Russia. The standing ovations were for the people. The flags waved were Ukrainian blue and yellow.

As for the US unit – well, it lasted several minutes.

The crisis in Europe was not the issue that experts expected to hang over this address when Mr Biden took office. But in the end it turned what is often a superficial speech into a major TV event, because of the message it would send to the beleaguered Ukrainians and the Kremlin.

In any case, there was an eager audience abroad. Earlier in the day, DailyExpertNews interviewed President Volodymyr Zelensky of Ukraine, whose defiant viral videos from Kiev garnered support for his country. Unshaven, weary and clad in green uniforms in his bunker, Mr. Zelensky begged Mr. Biden to send a “helpful” message as his country fended off the conquest. As the House room filled up, images from Washington split with shots of Kiev’s darkened skyline.

It was an unusual run-up to the annual speech. But in the end it imposed a sort of normality on the top part of the speech. Just like during the Cold War or after 9/11, you had a president who declared that “liberty will always triumph” to the cheers of the full house.

It was a familiar scene while it lasted. There was also a more famous tableau in the room compared to Mr Biden’s speech to Congress last year, which was suppressed by Covid security measures. “This year,” said Mr. Biden, “we are finally together again.”

There were only a few, optional masks in the crowd. The house was fairly packed (although some Republicans announced they would skip the talk about the Covid testing requirements). Once again, there was the company of guests for the president to call midway through the speech, including the ambassador from Ukraine. As Mr. Biden walked down the aisle of the house, there were handshakes and close talking, not fist bumps.

If you had turned off the sound, it was an image of the return to normalcy that you had expected or hoped for a year ago.

But with the sound on, you were quickly reminded that “normal” is a relative and elusive state these days.

To start with, there was the layover. It was once a rare and notable breakup when South Carolina Representative Joe Wilson yelled, “You’re lying!” to President Barack Obama in a joint session address in 2009. Now there was a mocking section, with Republican Representatives Lauren Boebert of Colorado and Marjorie Taylor Greene of Georgia embarking on a “Build the Wall!” singing, and a humiliating moment when Mrs. Boebert yelled at Mr. Biden about withdrawing from Afghanistan, just as he began to tell a story about the loss of his son Beau to brain cancer.

It was shocking, but not surprising. After all, the last time we saw Ukraine’s security discussed in Congress was during impeachment hearings. When Mr. Biden addressed a joint session last spring, it was just months after the Capitol was attacked by a mob trying to undo his election victory.

And the pre-buttals in conservative media anticipated a fight. A screen caption on Tucker Carlson’s Fox News show before the speech read: “Biden will probably discuss Ukraine’s borders more than America’s” — which you’d think would be unobtrusive, given that there aren’t any tank columns rolling over ours. , but here we are .

Mr. Biden was not so combative, at least not against his opponents in the room. But he was also more spirited than he has often been as a speaker during his first year in office. This was not the comforting Mr. Biden who shared the country’s sense of loss during last winter’s Covid death wave, though he did whisper at times, assuring Americans concerned about the grim war news, “We’ll be fine.”

Instead, he had the sharp, rousing tone of a president trying to unite the country — taking advantage of an opportunity to be heard after a year when his soft voice often got him lost in the tumult of the media.

Mr. Biden’s personal style, like that of other presidents, has served a political message. He was chosen by voters whose ears are ringing with President Donald Trump, voters who presumably wanted a break from the me-me-me chorus. And as the older, white nominee of a younger, diverse party, he positions himself more as the centerpiece of an ensemble than as the star of a solo act.

Sharing the spotlight has its uses, especially when assembling an international coalition in a crisis. But Mr. Biden’s approach has meant that he has not always been the protagonist of his story.

He had the camera to himself for one night. His speech was not a flowing piece of rhetoric; like most State of the Union addresses, it eventually turned into a steamboat of policy line items with the occasional zinger. But it was tough, right down to the closing cry, “May God bless you all. May God protect our troops. Grab them!”

It wasn’t immediately clear to whom that last exclamation was speaking – America? Ukraine? God? – or what or who to get. But sometimes in politics the book itself is the message.