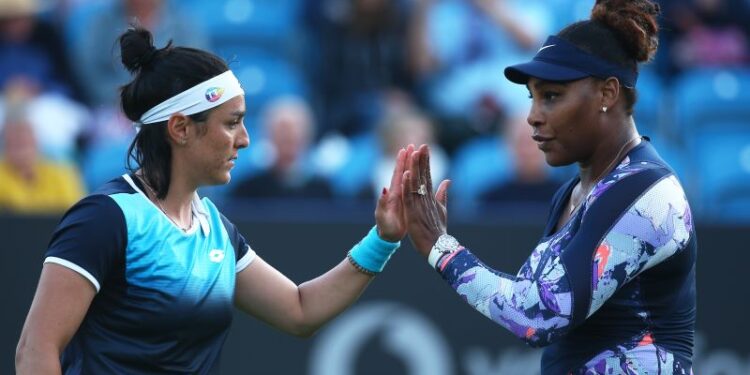 
Serena Williams marked her return to tennis after a year-long absence with a win alongside Tunisia’s Ons Jabeur in the women’s doubles at the Eastbourne International.

The pair defeated Marie Bouzkova and Sara Sorribes Tormo 2-6 6-3 13-11 in the warm-up on the lawn as Williams appeared on a tennis court for the first time since retiring with a leg injury in the first round of Wimbledon last year.

After the win, the 23-time grand slam winner admitted there were times during her 12-month hiatus when she feared she might never return.

“Absolutely, certainly,” she told the BBC when asked if she feared her career was over. “I’d be unfair if I said it wasn’t, but now my body feels great.

“It’s doubles, I only play half the field, but I’ve trained a lot and it definitely feels good. You know what, I take it literally from day to day,” Williams added. “I’ve really taken my time with my hamstring injury, so I just don’t make a lot of decisions after this.

READ: ‘I should have been on about 30 or 32’ grand slam titles, says Serena Williams

“It was great there and so much fun playing with Us, we had a lot of fun. Our opponents played great and we were happy to stay there.”

Last week, Wimbledon organizers announced that Williams had been given a wild card to enter the singles draw at the All England Club.

The 40-year-old last reached the Wimbledon final in 2019, where she lost to Simona Halep, and told DailyExpertNews’s Christiane Amanpour in March that she should have been “on 30 or 32” grand slam titles.