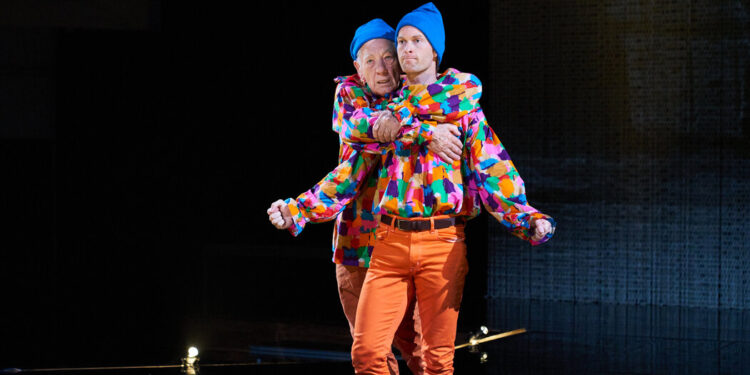 There is, of course, also excellence among the lesser-known talent here. But there’s no denying that McKellen, now 83 and virtually the only one among his generation of British actors, is still on stage. (Too many of his former colleagues have either retired or passed away.) Last year, he gave us a lithe, age-appropriate Hamlet for a longer run. And this month, he returns to that sacred text, in a 65-minute fusion of dance and theater that is unobtrusive but pleasing to the eye.

The performance, conceived by McKellen and the Danish choreographer Peter Schaufuss, finds that the veteran Shakespeare delivers excerpts from the text in his familiar, deep voice rumble; all the other performers are dancers, many from the company of the Edinburgh Festival Ballet, which Schaufuss leads. The approach includes Ophelia (an expressive Katie Rose) who dives sadly to the stage floor, Rosencrantz and Guildenstern briefly leap into view, and the charismatic dancer Johan Christensen tormented like the young Hamlet: he and McKellen offer dual aspects of a split psyche. Luke Schaufuss, the choreographer’s son, completes a sort of central triangle as a model-handsome Horatio in a decorative outing that, while watchable, doesn’t go very deep.

Contemporary themes are also featured in Edinburgh, while this year’s celebrity names chose to look to the past. “Silkworms”, at the Roxy Assembly, tells of a lesbian couple from Nigeria who arrive in Glasgow and seek permanent asylum in Britain.

The play, written by Vlad Butucea, a Romanian-born playwright from Glasgow, is set on 17 floors in a low-income housing project where, we’re told, “You can hear the wallpaper peeling.”

Abidemi (a radiant Ewa Dina) is the more elaborate of the pair; her partner, Omolade (the intense Antonia Layiwola) fears that the authorities will not recognize the gravity of the women’s plight. That the previous occupants of the same apartment leapt to their deaths reinforces the sense of unease: once their fate is decided, the lovers’ bond is put to the test in a slow-burning drama that can be teased further for greater impact.

Calvin (the live-wire Michael Dylan), the gay man at the endearingly manic center of James Ley’s “Wilf,” is in the process of ending a relationship when we first encounter him at the center, chatting and wearing a Celine Dion T-shirt. shirt. His story, he tells us at the beginning, is about love, loss and the comfort he creates in the car titled, a used Volkswagen Polo that he has come to cherish as if it were a person. The play is at the Traverse Theater – always a reliable Fringe destination – and directed by Gareth Nicholls, the house’s Artistic Director.

Its good nature proves utterly infectious as Calvin learns to make his way, literally and figuratively, through the pain of separation, towards a possible fresh start with one of several men he meets along the way. Neil John Gibson gives vibrant life to a wide variety of romantic prospects, and a third performer, Irene Allan, is a hoot as a polyamorous one-time therapist. The sexual candor of the play was a surprise at 11 a.m. — play times vary throughout the run — but “Wilf” is highly engaging no matter the time of day, as well as very moving.

The sexual peccadillos in ‘Boris the Third’ in the Pleasance Courtyard belong to the British Prime Minister. Writer-director Adam Meggido’s over-long comedy puts a teenage Boris Johnson at the center of a production of ‘Richard III’ at Eton, one of Britain’s most elite boarding schools. The disturbed show happened—or maybe it didn’t, as Johnson’s father recalls that Shakespeare’s actual play was “Richard II”—with a protagonist who, in this account anyway, was more intent on sleeping with two sisters at once. to go beyond his lines.

Meggido’s play attempts to connect the underhanded doomed charmer Johnson once acted on stage with the modern-day leader who has been repeatedly summoned for deception. While it’s mostly worth checking out for Harry Kershaw’s perfect performance in the title role, it still feels like a shaky first draft.

I had a much better time at Sonya Kelly’s amazing “The Last Return”, the best of the seven shows I attended last weekend. Also at the Traverse, this production of the Druid Theater of Galway, directed by Sara Joyce, brings together a diverse array of characters, all clamoring for entry to every prize for the sold-out final performance of a fictional play.

The ebb and flow of the queue is of little importance to the ticket seller (Anna Healy), who repeats – as if – memorized that there are no more seats, and the potential players become more and more fickle. A disgruntled college graduate in his 60s (Bosco Hogan) has tried 36 times to get through the show, but failed because he is incontinent; this performance is his last chance. Among those also seeking admission is a battle-scarred American soldier (Fionn Ó Loingsigh) who just wants to rest his feet after the trauma of war and, most memorably, a critical Scottish woman (Fiona Bell) who offers homemade snacks to the other characters as she bends forward for a seat.

The lineup of hopefuls also includes a mostly taciturn Somali woman (Naima Swaleh) who has crossed continents, we discover, to the theater and whose final gesture ends the piece on an unexpectedly moving note. Chaos, “The Last Return” suggests, lurks everywhere, but so does humanity and compassion, if we’re lucky enough to experience them—and this piece.