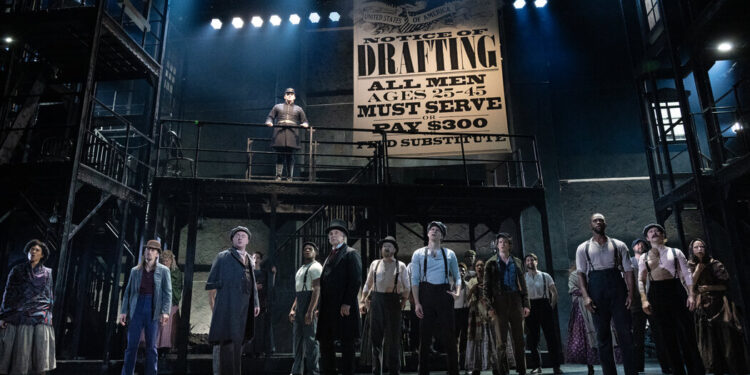 DUNBAR I think “Paradise Square” was trying to tell the story of trauma and resistance and strength within the context of 19th century history. Was it quite right? Probably not, and I’m not sure if a show always has the correct history. But again, it’s about more than facts and figures. It’s about bringing people to the center of stories that have never been there before the public. It is fresh and powerful to center a story of the draft riots around a black woman.

PAUL Totally agree, Erika. In ‘1776’, some of the most moving parts of the musical are the scenes with the courier – no founder. Franklin, Jefferson and Adams are the famous historical characters. The courier, who delivers the battlefield messages to the Continental Congress, is literally nameless. But this character, who has the least power in the room, gets one of the most powerful songs – “Momma, Look Sharp.”

SCHESSLER Jesse, you weren’t all that excited about Paradise Square. And Maya, I understand you felt the same. How well do you think the reorientation worked?

VEGETABLE As an approach, I’m all for what we call renewal. The problem with “Paradise Square” is not the perspective from which it is told, but that in an attempt to pile a community’s entire history (even its made-up parts) on a few fictional figures representing elements of the conflict, the authors created stick people who couldn’t bear the burden. This gives you the wrong impression, as musicals naturally do, that there is one hero and one villain. Only because Joaquina Kalukango was so phenomenal in the lead role was something richer conveyed. There is history and then there is craft.

PHILLIPS Well said, Jesse. The issue of scope is always a tricky one to navigate in these history shows – how big is our lens? In my review of ‘Suffs’ I argued that a show can’t be everything to everyone; attempting to do so will eventually lead to the sacrifice of story and character.

SCHESSLER “Suffs” drew a lot of comparisons to “Hamilton”, but there was something fundamentally different about it, starting with the title. It was about a movement, not an individual – which is perhaps more in line with history, but also a lot harder to dramatize. Claire, what did you think of how “Suffs” handled history?