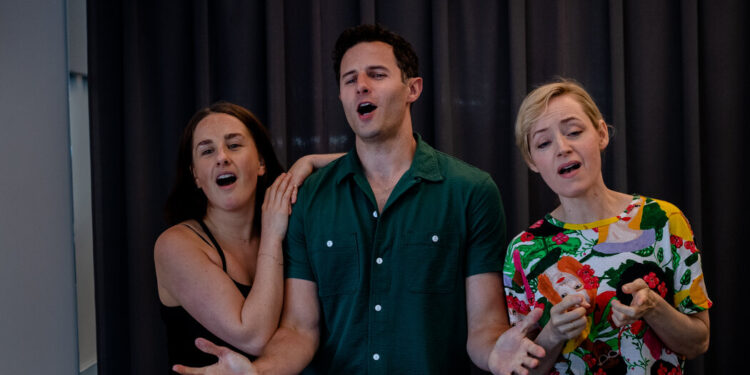 The Broadway comeback season was a hurricane. Even the heavily award-winning revival of a Sondheim favorite like “Company” couldn’t withstand the shaky ticket sales brought on by a pandemic wary of theater-going community.

There was still much to praise, and much to be etched in the memory. But more than most other musicals that opened last season, the one whose songs and sheer audacity stand the best chance of living on in my heart—and on my shower playlists—is the one that shone briefly, amid a deluge of vitriol.

The one who only played 59 performances and whose Netflix presentation won five Razzie Awards: the ill-fated “Diana, the Musical.”

This week, Roe Hartrampf, the show’s nefarious Prince Charles, plays a two-night engagement at 54 Below, alongside Jeanna de Waal (who played Princess Diana) and, also on the first night, Erin Davie (Diana’s rival for the affections from Charles, Camilla Parker Bowles).

While they won’t be singing from the score, Hartrampf said the musical will be boldly referenced throughout.

During rehearsals for the club act—ironically, in a Midtown studio across from the Longacre Theater where they once reigned—the three reminisced with a mix of good humor and expert acceptance. After all, a promotional blurb for the concert deliberately nods to Hartrampf’s Razzie nomination and the short Broadway run.

It also references the Netflix fiasco that followed after the musical premiered on the streaming service months before its Broadway opening. Recorded without an audience in the midst of the pandemic shutdown, it landed with a thud, and that response helped determine its ultimate fate.

“Part of the struggle was that the audience didn’t know what to expect from a musical about Diana,” Hartrampf said after the rehearsal. “They were waiting for us to tell them, ‘You can laugh because this is a comedy, or keep quiet because it’s a drama.’ They had to show what this piece would become.”

By the time I attended the musical’s premature final performance barely a month later, the cast had plunged into absurdity. The hyper-kinetic ensemble (one of the most all-out, on-point dances of the season) was sassy as ever, but the lead actors seemed to be having fun too. De Waals’ mischievous wink had become more flamboyant, and the cast reveled in the extravagance of her expletive-laden song about the dress Diana wore to show off her romantic rival.

“It was always meant to be a rock show, there was always humor in it and it always had to be staged,” said de Waal.

Although the losers of the Razzies named her worst actress, the Walloon’s extraordinary, vocally gymnastic performance earned a Drama Desk nomination. I would have also given her a Tony nomination, with a special mention for Grace Under Internet Fire. She already apologized for the Netflix special by the time the show started, and kept to social media during his run.

De Waal’s performance reminded me of the idea that Diana Spencer was a 19-year-old, bereft of a comfortable young adulthood, cynically plucked by stuffy royals for good optics, then tossed out as soon as her personality got in the way. (That problem hasn’t gone away.) Her Diana was temperamental, petty, and rude, but eventually won.

The music, by Bon Jovi keyboardist David Bryan, was as arena-ready as you’d expect, referencing Andrew Lloyd Webber’s early marriage of rock bombing and theatrical folly (Exhibit A: “Evita.”) The lyrics (by Bryan and Joe DiPietro) were barely more in-depth than a “Live Laugh Love” poster, but sung at full blast, they stuck like Super Glue. Diana’s “I could use a prince to save me from my prince”, rather silly on paper, came across as a primal scream.

And director Christopher Ashley, a Tony winner for his work on “Come From Away,” kept “Diana” moving as seamlessly and hypnotically as the frenzied, tabloid-ready life of the princess. (Nathan Lucrezio, who played her biographer Andrew Morton on Broadway, will also appear in Hartrampf’s act.)

One of the criticisms of “Diana” was that it exploited the tragic story of a real woman for pop consumption. Up to that point: any biographical story can be said to be inherently reductive and exploitative. If director Pablo Larraín and actress Kristen Stewart can (rightly) score awards for their cinematic take on Diana as the “last girl” in a horror movie (2021’s “Spencer”), I see no reason why this musical should be punished for forming the source material to match the blinding-blinding structure of the form.

Was “Diana” tasteful or poetic? Certainly not. But it was fun. Do you remember fun? Not so many productions did this season, but set their sights on scoring political points, varying degrees of success and an even weaker sense of play.

You have to take a work on its own terms, and “Diana” put them in for 10 minutes, when the future princess took over the cello duties from Mstislav Rostropovich and did a podium dive in a royal crowd like Prince Charles did the robot. This fantasy sequence — illustrating how Diana would rather be on a date at a disco than at a somber classical concert — reflected the show’s unabashed devotion to pop maximalism.

While biographical commitments sometimes strangled the book, even its narrative shortcomings were saved by bizarre directorial choices. (If you somehow forgot the dizzying tone at intermission, Act 2 began with Diana’s secret lover, the riding instructor James Hewitt, shirtless astride a saddle, screaming a fierce high E.)

I count the glitzy show among the works that, excuse my youthfulness, “slay”: highlighting the improbable feats of an underdog (usually a woman) with the subtlety of a six-foot sword, and twice its brilliance.

It’s what makes Dolly Levi’s arrival at the Harmonia Gardens so glamorous; Evita’s “Rainbow High” fashion so decadent; Momma Rose’s ambition so delicious. The spectacle of someone who transcends his given situation is woven into the fabric of musical theatre; Diana quickly switched through different outfits in one issue, while announcing her plan to regain her visibility had that in spades.

Still, Davie admitted, “It turned a lot of people off. As much as there was a group of people who loved it, there were others who said, ‘How dare you?’”

As with many a critically reviled Broadway musical, those who loved it banded together and called themselves “Difanas.” They clung to the dresses, the belt, the insane boldness of an AIDS patient who sang to the princess, “I may be unwell, but I’m pretty as hell.”

such a fan, Lizzie Milanovich (which she/she uses pronouns) designed a custom “Diana” sweater and then tweeted an offer, pending a few questions. They ended up getting 180 orders, they told me, including one for Hartrampf.

“We have to appreciate Twitter so much for creating the audience we had,” Hartrampf said. “In the week the movie came out, Twitter was rough. But then the response to the response was so amazing, with people defending our show and taking ownership of the material and understanding what the show was about.”

Attendees at his last performance goods the girls and the gays — theater buffs, writers and performers who have searched enough YouTube rabbit holes to recognize a diamond, no matter how rough, when they see one.

Mark my words: the show is ready for a new look. Consider “Legally Blonde,” which is currently enjoying a critical revival thanks to a Lucy Moss-directed revival in London, and lingering social media affection for its original, bubble-gum-pink production.

Or consider the recent interest in revising the stories surrounding stars like Britney Spears, women devalued and discarded until a new generation happens to “rediscover” their worth. (Moss’s own “Six,” about an earlier series of royals, Henry VIII’s wives, is leading the way by tackling this schism directly.)

I can’t wait for a group of inner-city drag queens to put together a low-budget, high-camp production of “Diana” in ten years’ time. They know exactly how to play it. Perhaps that was why a local queen who brought De Waal onstage to perform “Underestimated,” the musical’s opening solo, during show tunes night at a Fire Island Pines club—no less on the night of the Tony Awards— felt so spectacularly appropriate.

Her soaring vocals in the fabulous finale live on through my headphones. While Sondheim’s body of work is the reason I sleep well at night, it’s sonic moments like this that wake me up in the morning.