On English Stages, Tales From the Asylum 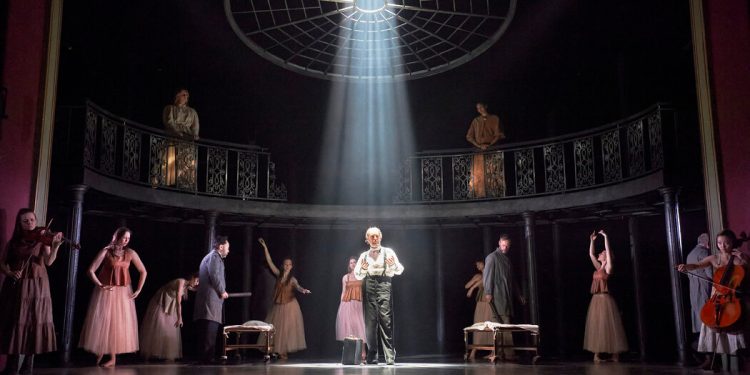 LONDON — “Wash your hands! Wash your hands!” That plea has been echoed around the world in recent years and gives a current force to “Dr. Semmelweis’, runs through February 19 at the Bristol Old Vic, a beautiful 18th-century playhouse in the South West of England.

The urgent speaker is the Titular Doctor, a Hungarian-born physician in 19th-century Vienna who pioneered antisepsis, but died in 1865, aged 47. It was left to subsequent doctors such as Joseph Lister to take up his work.

The play tells the time-honored story of a man against the system, in this case a visionary whose desire to reverse a high mortality rate among young mothers clashes with a largely careless establishment. Worthy of Ibsen and previously recorded in a Howard Sackler play that circled Broadway but never got there, Semmelweis’s story emerges here as a star vehicle for Mark Rylance. The acclaimed actor (three Tonys and an Oscar) co-wrote the play with Stephen Brown.

The director, Tom Morris, runs the venerable Bristol venue and has given Semmelweis’s too-short life a busy, bustling production with actors bursting from the Ti Green turntables into the auditorium now and then, musicians and dancers on hand to amplify the discordant emotions of the piece. The dancers, choreographed by Antonia Franceschi, give a swirling physical expression to Semmelweis’s increasingly disordered mind and to the mothers who lost their lives through hygienic neglect. Salomé’s string quartet weaves itself between events, playing fragments of Schubert and giving a high-quality artistic shine to a serious subject.

If this all sounds like a lot of embellishment, it’s fair to say that the first act in particular feels like stage business is being used to disguise a fairly standard script. The play opens at the end, when Semmelweis in Hungary, along with his calm-looking wife, Maria (Thalissa Teixeira), recalls a climate of contagion in Vienna that wreaked irreparable damage to the doctor’s psyche.

How could a vaunted ‘city of new ideas’ not respond better to the investigations of a young maverick who discovers chlorine’s sanitizing potential? The grocer’s son has determined that the death rate in the world’s largest hospital – as the General of Vienna was then – is three times higher at the doctors’ clinic than among the midwives. “Cadaver particles” are suggested as the culprit, passed through unclean hands from the autopsy room to the delivery ward and turning the hospital into an actual slaughterhouse.

The locals don’t have it. “Nuts by name, nuts by nature,” remarks one of Semmelweis’s colleagues scornfully, referring to this upstart’s first name, Ignaz. It doesn’t matter that the insult doesn’t make much sense since these people probably didn’t speak English.

After the break, the bare, explanatory nature of the writing continues. If Semmelweis is right, we are told, “the whole future of medicine will change.” There’s also a line about bleach’s potential efficacy that draws thumping parallels to one of the more, er, idiosyncratic proposals for beating the current pandemic.

Through it all, Rylance is a resilient physical presence. He casts a stammering restlessness in the role of a radical thinker whose thoughts sometimes exceed his words. You have to smile when this protean actor — acclaimed on TV and film, but committed to the stage first and foremost — casually talks about “not wanting to waste time in the theater either,” and it’s nice to be among the supporting cast like this. fellow theater buffs like Alan Williams, in stern form as the obstetrician Johann Klein, Semmelweis’ nemesis.

More than anything else, “Dr. Semmelweis” whets the appetite for Rylance’s return to the London stage in April, repeating his seismic performance in the Jez Butterworth play “Jerusalem”, which was first seen at the Royal Court in 2009. That same London address, a key address for new writing, is currently hosting an Alistair McDowall play, “The Glow,” which is truly crazy, albeit intriguing.

The title character of “Dr. Semmelweiss’ died unappreciated in an asylum, and McDowall’s time travel drama begins two years earlier, with a dimly lit figure anxiously inhabiting a windowless cell. That figure, a woman (Ria Zmitrowicz), then becomes a glimpsed in a number of settings and centuries, going from the 1300s, in the company of a warrior-like character (Tadhg Murphy) who may have moved from ‘Game of Thrones’ to 343 AD and on to the 1970s and beyond.

What the hell is going on? You could ask McDowall the same about his 2016 play for the Royal Court, “X”, which was set on Pluto.

Screaming and apocalyptic, only to become passionately poetic in its closing monologue, “The Glow” can best be seen as a sensory experience in which light and sound merge with the writer’s free imagination to evoke a lonely and difficult world. which nevertheless leaves room for the warmth of the title. The intermission, which lasts only about 40 minutes, gives the audience plenty of time to reflect on what they have seen.

The more literal theater-goer will be distracted by the play’s apparently deliberate opacity, but that in itself ties in with the experimental slant of a theater defined in part by the playwright Caryl Churchill, whose own curiosity and disregard for convention may be a beacon for McDowall.

For myself, I must commend the full throttle production of Vicky Featherstone, the Court’s artistic director, in tandem with a design team in which Jessica Hung Han Yun’s mercurial lighting reigns supreme. Fisayo Akinade and Rakie Ayola offer heartfelt support as more recognizable participants in a world with which Zmitrowicz’s initially mute wife has a hesitant relationship. First seen as a spiritualistic medium – yes, you read that correctly – Ayola also has a beautiful singing voice.

With the mysterious spectral figure at the center of the piece, McDowall has presented a gift to Zmitrowicz, a burgeoning actress who has recently come under the spotlight especially in the Almeida. Alternately gruff and feverish, withdrawn but eloquent, this performer captures our attention all the time, even when the piece she inhabits bounces off in all directions around her.