Putin, Chekhov and the Theater of Despair 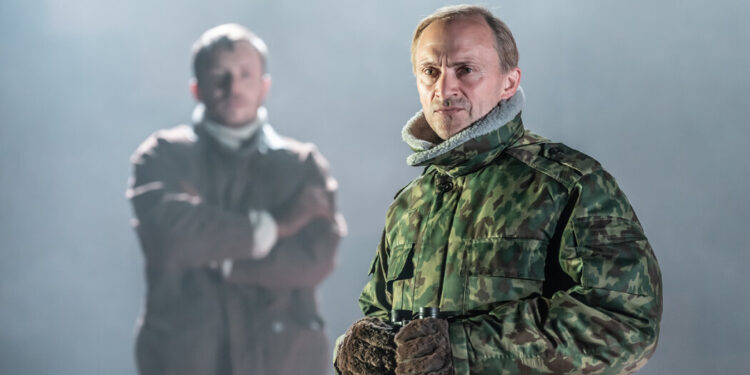 LONDON — There’s a chill in the air at the Almeida Theater, despite the record heat here. That temperature drop comes from the cool and unnerving “Patriots,” a new drama whose view of power politics in Russia over the past quarter century has evoked a shudder at the rise of despotism.

The gripping production, directed by Rupert Goold, will run through August 20.

Written by Peter Morgan (“The Crown,” “Frost/Nixon”), “Patriots” chronicles the sad, shortened life of Boris Berezovsky, the shrewd billionaire who died in 2013, aged 67, in political exile. in London. An inquest into Berezovsky’s mysterious death yielded an unusually “open verdict,” but on this occasion it is unequivocally presented as suicide: the play ends with this balding man, bereft of authority, preparing to end his life.

Berezovsky, an academic whiz-turned-oligarch who accelerated the rise of the younger Vladimir V. Putin, later fell out with the former ally who, according to the piece, expanded his power base with promises of “liberalizing Russia,” yet went ahead with it. to do anything but.

Morgan introduces Berezovsky, age 9, as a math prodigy whose mother hoped he would become a doctor. (A shiny Tom Hollander plays the whole part.) From then on, we go 40 years on to find Berezovsky an integral member of the wealthy Russian elite who welcomes into his office a submissive Putin, then vice-mayor of St. Petersburg.

“Respected Mr. Berezovsky,” says an initially withdrawn, ferret-like Putin, “you’d have to live on another planet not to know you!” But it won’t be long before Putin has changed his tune and his tone as he rises from prime minister to president and consolidates power around him. In a remarkably effective wordless scene, Putin tries out poses in front of a mirror to see what makes him look most impressive. His earlier hesitation has given way to a man in love with his own heroism.

Berezovsky watches with dismay at such a dramatic change of character and urges the former KGB agent to “know your place”. But right now, Putin just won’t be sidelined. And besides, reasons Putin, why keep your enemies close when they can be destroyed just as easily?

Goold, the director, had to deal with another headline-maker at the Old Vic this spring in “The 47th,” which featured Donald J. Trump in the run-up to the next presidential election. Goold is in better company this time: “Patriots” is a richer, less imaginative piece, with stark resonances for today. While Morgan rightly leaves it up to the public to make the connection, you can draw a line between the glorious realm Putin longs for in the play and his ongoing attack on Ukraine.

In one of the performances of the year, Will Keen, as the Russian leader, amazes all the while bringing his character to life in an excited, unpredictable life. His early obsequiousness in Berezovsky’s presence gives way to an icy rejection that is most apparent when his former mentor writes as a fellow patriot and asks permission to come home to Russia. Putin dictates an answer, then tells his secretary to tear up the letter: Berezovsky, Putin concludes, “isn’t worth it.”

Hollander also impresses, as he did in a dazzling star turn in “Travesties,” which won the actor a Tony nomination in 2018 — two talky plays that required an actor at home with plenty of language. His character is both a quick-tempered womanizer and too naive to realize the young Putin’s potential for authoritarian misrule.

The scope of the play is expanded even further by the friend of the Russian president, the oligarch Roman Abramovich (the excellent Luke Thallon), who fights Berezovsky over ownership of the oil company Sibneft. That case, which went to trial in London in 2012, plays out here as a resounding defeat for Berezovsky that only aggravates his psychological distress. Alexander Litvinenko (Jamael Westman, a former lead in “Hamilton”), the Putin critic poisoned in 2006, also appears as the “most honorable” of the dissidents (or so Morgan claims): a political victim shrouded in glory who the sorrowful Berezovsky never knew.

There is an aspect of courage, you feel, to write ‘Patriots’ while Putin is on the march. (That said, like Trump with “The 47th,” it’s possible these men’s egos would thrive on the attention.) In the days after Russia launched its attack on Ukraine, orchestras, concert halls, and opera houses pulled Russian works from their homes. stages, and it looked as if the performance of the Russian repertoire in the West might no longer be allowed; overseas tours of the Bolshoi Ballet, among other legendary Russian art companies, were also cancelled.

So it’s a relief to welcome a Russian classic, “The Seagull,” first presented in 1896 by Anton Chekhov, who died nearly half a century before Putin was born. That this first of Chekhov’s four great plays, like ‘Patriots’, ends with a suicide is an intriguing coincidence that also points to the undercurrents of pain that animates both plays.

Performed barefoot and in contemporary attire at the Harold Pinter Theater through September 10, Jamie Lloyd’s immersive production promotes the stripped-down approach to the classics he brought to a recent “Cyrano de Bergerac” acclaimed in New York and London.

Just as that play had no fake nose for its title character, this “Seagull,” seen here in Anya Reiss’ 2012 version, never shows the title’s wounded bird on stage. Without props of any kind, the cast members, led by “Game of Thrones” alumna Emilia Clarke in a stellar West End debut, deliver the piece sitting on green plastic chairs and encased in particle board; they speak with a calm intensity, as if we were listening to the deepest thoughts of the characters. Some will be annoyed by the approach, but I was captivated from the first muffled statement to the last.

Like ‘Patriots’, this ‘Seagull’ draws on its own well of grief, even though the world of writers and actresses in Chekhov’s play is far removed from Morgan’s power brokers and politicians. Lloyd’s ensemble conveys the fluctuating affections of a quietly devastating piece that leaves you captivated by the theatrical power of despair.