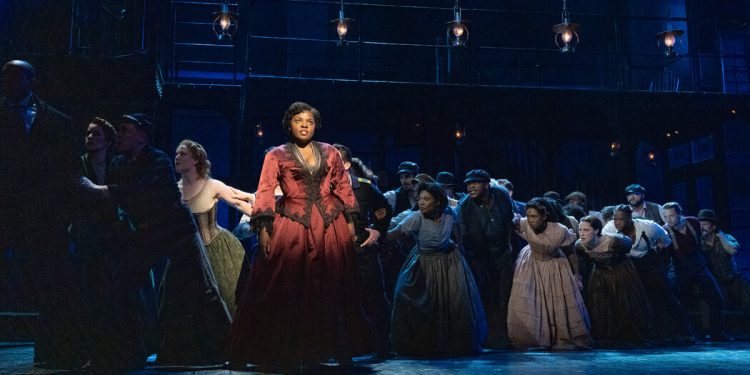 Yes, history shows that in 1863, after Abraham Lincoln extended the Civil War draft to all white males between the ages of 25 and 45 – black men were excluded because they were not considered citizens – mobs of disaffected Irish Americans rioted against black people in New York, setting buildings on fire and killing many in their path.

And it’s true that in the impoverished, piano-shaped neighborhood of downtown Manhattan called Five Points, some black and Irish neighbors who had lived together in relative harmony joined forces to resist the mob.

But by hammering these large-scale events into individual stories and manipulating them so that performers have reason to sing at top volume and dance almost nonstop, the uplifting, star-making, overwrought new musical, which opened on Sunday at the Ethel Barrymore Theater , turns history on its head. Racism becomes an individual character flaw rather than a systemic evil; resistance, the lonely moral genius of a hero.

In this case, the hero is Nelly O’Brien, or rather Joaquina Kalukango, who plays her with enough guts, stamina and vocal bravado to make you believe in a character stitched together from the shavings of history. Nelly owns a (fictional) Five Points bar and brothel called Paradise Square: “a little Eden”, where, as one of Nathan Tysen and Masi Asare’s bare lyrics puts it in the title song, “We love who we for to love / without apology.”

Most of the characters – and there are 10 main roles – are less like humans than ideas with human masks. Willie’s war buddy Mike Quinlan (Kevin Dennis) represents the unemployed Irish workers who are easily influenced by demagogic politicians. A white pianist and composer who turns plantation melodies into uptown hits (Jacob Fishel) represents, somewhat anachronistically, the problem of cultural appropriation – although it is a nice touch that some Stephen Foster songs, such as “Camptown Races”, are remade. appropriated in the music of Jason Howland.

Another Foster song – “Oh! Susanna” – gets an even more interesting overhaul, insidiously connecting the show’s all-rounder, Frederic Tiggens, as he encourages the Irish Rebellion, with racist Southern tropes. (Foster’s tune becomes re-set with the text “You were loyal to a country that was not loyal to you”.) Alas, no dialogue from Tiggens is quite so subtle; a vaguely defined “uptown party boss” evoking the “depravity” of places like Paradise Square wants to close, he leaves the artist John Dossett to do little more than metaphorically twirling his mustaches.

If most of the score suffers from mild exaggeration – whipping up a series of generic rock ballads and gut-wrenching anthems – the book and staging suffer from complete emphasis. The book, credited to Christina Anderson, Craig Lucas, and Larry Kirwan, is particularly problematic. Based on Kirwan’s musical play “Hard Times”, and apparently heavily rewritten over nine years of development, it strips everything down to bare basics while trying to accommodate so many characters along with a checklist of sensitivities.

I’m as much of a sucker as the next critic of liberal piety, and I appreciate the attitude of a Black Lives musical whose heroine says toward the end, “We’re passing you this story on our own terms.” But strong points of view do not compensate for weak characterization and do not suggest why such strength is necessary. That the position of the Irish and other white immigrants is not dramatized nearly as effectively as that of the black characters is morally good, but theatrically dull.

In that combination, I feel the meaty hand of producer Garth H. Drabinsky, who seems to have used his influence to mold “Paradise Square” into a likeness of his earlier hits. Like “Ragtime” in 1998 and the revival of “Show Boat” in 1994, it places social unrest as the product of a few representative individuals and tries to fill the inevitable gaps with big sound and stage art. It also borrows a famous plot device from “Show Boat” – which is effective here even if the debt otherwise goes unpaid.

But unlike those musicals, which were built on the frames of strongly written novels by authors with unique voices, “Paradise Square” feels almost authorless despite its many contributors, and directed by Moisés Kaufman, known for his strong hand and conceptual coherence. , doesn’t. little to erase the impression of anonymity. (The design elements are also purely efficient.) Contingent and anxious, the show seems more interested in saying the right things than telling a cohesive story.

Wait – I take that back: it tells a coherent story in two ways. One is the dance, which uses a kaleidoscopic crash of contextual styles, including step dance for the Irish characters and Juba for the black, to explore, much more subtly than the book, the place where appropriation and joyous sharing meet. . (While unlikely as a plot point, the dance-off between Owen and Washington is an emotional highlight.) Again, there’s a lot of hands involved here, with Bill T. Jones leading a musical staging team of at least five other choreographers, but it result scores his points effectively.

The other source of coherence in “Paradise Square” is Kalukango, who somehow blends the role’s notable difficulties into her characterization, making it incredible in the good way rather than the bad. I’ve seen her before as Cleopatra in ‘Antony and Cleopatra’, Nettie in ‘The Color Purple’ and Kaneisha in ‘Slave Play’. I’m not exactly surprised, but they were more successful pieces. Nothing really prepares you for the moment when an actor brings everything she’s got onto the stage and essentially writes what needs to be said as you watch. It makes you believe in making history.