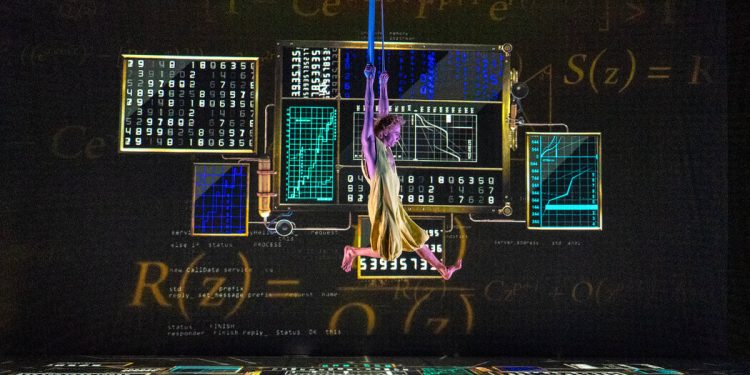 Antoine de Saint-Exupéry’s “The Little Prince,” a mega-seller classic of children’s literature first published in 1943, begins with an emergency landing. Now, an adaptation of the much-loved story has made an equally unfortunate entrance onto Broadway.

The show tries to juggle theatre, dance, circus, cabaret and everyone’s favourite: philosophical reverie. It’s a mix that Cirque du Soleil, especially with the shows directed by the mastermind Franco Dragone, has refined into coherent spectacles. And the company’s achievements seem even more remarkable compared to this disappointing medley, which opened Monday at the Broadway Theater.

This “Little Prince” is an uneasy hybrid, neither fish, nor fowl, nor sheep. When the childlike creature (his age is unclear in the book, which is part of the point) encounters a stranded kite at the start of the show, he asks, “Please, draw me a sheep.” Enter a swarm of actors, prancing and dancing in shapeless outfits, and bleating like the sweet, sweet animals. This is when, a few minutes into a nearly two-hour production, the realization dawns that this “Little Prince” is going to be a long day’s journey into whimsy.

Saint-Exupéry, a Frenchman who was also a pilot in the 1920s and 1930s, wrote and illustrated “The Little Prince” while exiled to New York during World War II. The book was first published here in 1943, which is why the manuscript is in the collection of the Morgan Library & Museum. Well, except now, as it’s on loan to the Musée des Arts Décoratifs for an exhibition, the precious artifact’s first trip to France in nearly eight decades.

New York, for its part, is getting this stage version, which premiered in Paris in 2019 and has been touring extensively ever since. It’s hard to fight the creeping suspicion that we’ve been shortchanged.

The aviator (Aurélien Bednarek) and the little prince (adult Lionel Zalachas, his blond, spiky hair that makes him look like Sting in the original “Dune” movie) cutely meet in the Sahara: one plane crashed and the other visits a small asteroid. While the aviator tries to repair his engine, the little prince tells him about his surreal encounters with a series of creatures on various intergalactic worlds, including a retrieving rose (Laurisse Sulty), a number-crunching businessman (Adrien Picaut), a manipulative snake ( Srilata Ray) and a wise fox (Dylan Barone), who delivers one of the story’s most famous lines: “What is essential is invisible to the eye.”

The book is a parable so rich in flight, ahem, fantasy that it has been adapted into plays, musicals, films, operas, graphic novels and games over the decades. (Connoisseurs of Hollywood kitsch may fondly recall Stanley Donen’s 1974 film, in which Bob Fosse conclusively established that a snake can smoke and make jazz hands.)

The structure lends itself well to a circus-like, vignette-based show, as each encounter can become a number and you can string one after the other with minimal interference from a traditional plot. Still, those who haven’t read the book — and even those who have — may wonder what the hell is going on, and the staging and performances aren’t strong enough to keep the mind from wandering into such questions.

At the center is the lead narration on stage by Chris Mouron, who also wrote the adaptation and is co-director of choreographer Anne Tournié. Mouron, who is an androgynous figure in a green suit and a steampunk butler suit, hesitantly declaims her lines (in English) as if delivering Racine monologues, effectively sucking any potential levity from the show. Like the best children’s literature, Saint-Exupéry’s book is bittersweet and even touches on tragedy, but it also has a poetic grace and many touches of surreal humor – few of which are on display here.

Instead, the show swings from one scene to the next, with a few aerial shots and too short an appearance by the ring-like device known as a Cyr wheel, drowned out by too much bland dancing and far too much of Terry Truck’s included. neo-Classical, New Age score. Adding to the mood – make what you want – Peggy Housset’s mere useable costumes and Marie Jumelin video design that looks like a photoshopped hodgepodge of paintings by Salvador Dalí and René Magritte, the trippy 1970s animated film “Fantastic Planet and Roger Dean’s illustrations for Yes album covers.

Despite the performers spending time on stage, the production remains stubbornly earthbound. Until, at least, it turns out to be a slightly perverse move: the single show-stop scene, in which Antony Cesar flies over the audience, happens after the curtain, when there’s no more show to stop.