‘Space Dogs’ review: boldly go where no dog has gone before 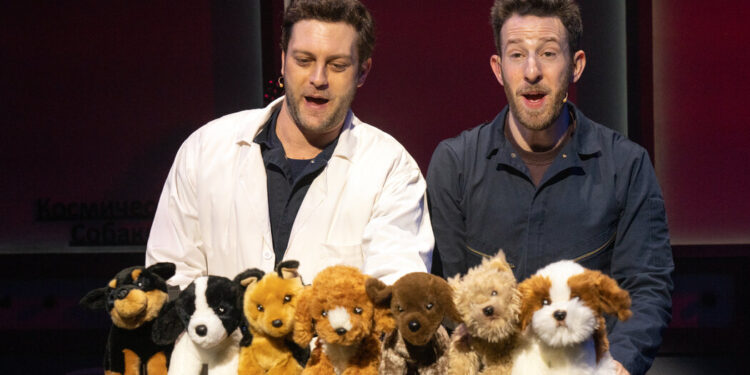 We are in 1957, the height of the Cold War. The Soviets and Americans are racing to space, and the Soviets have taken a lead by launching the first man-made object into Earth’s orbit. The next goal on the horizon: to send a man into space. But before that, there was Laika, a stray dog ​​from Moscow who was the only living inhabitant of the Sputnik 2 spacecraft, orbiting the Earth. Sputnik eventually fell from space, but Laika did not survive the journey.

Now, Laika has been brought to life as the subject of a bland new musical, “Space Dogs,” an MCC Theater production that opened on Sunday and stars its creators, Nick Blaemire and Van Hughes.

Directed by Ellie Heyman, “Space Dogs” tells the story of Laika, the most famous of the dogs Soviet scientists trained for space travel. In this retelling, a scientist known by the codename Chief Designer spearheaded that initiative.

Portions of the show are told from Laika’s perspective, from diary entries and songs (Laika is played by a stuffed animal usually handled and voiced by Blaemire). Other parts come from the perspective of the lead designer, played by Hughes. The rest of the scenes break through the fourth wall and provide historical and political context. It’s informative, in a sloppy way, but also hopelessly cheesy, chock full of dad jokes, puns, silly accents, and even a dog beauty contest. “Space Dogs” exudes the vibe of a B-grade educational kids show—albeit one with an occasional vulgarity amid the bleak material.

A curiously upbeat song tells how the chief designer, “driven by a void in the middle of his chest,” to use a cliche from the show, was imprisoned in the gulag and tortured during the height of Stalin’s rule. And while no dogs were injured in the making of this show, there are dog casualties and bleak existential musings from the four-legged friends. In addition to the Bowie-esque chorus and spoken word of “Fill the Void,” and the alternating soft acoustic chords and heavy strumming of “Blessed by Two Great Oceans,” most of the musical’s songs are fairly uniform stylistically and generally upbeat—jumpy but nevertheless forgettable figures that contribute little to the story.

“Space Dogs” also telegraphs heartbreak at the Pixar level via wacky tunes. “What if I die? What if I fall from the sky?” Laika sings and later sings from beyond the grave about her lost hopes for a family and delicious steak. It’s emotionally manipulative, especially for tender animal lovers in the audience. The show then has to walk a difficult line between a celebration of Laika and her canine colleagues (” History has been changed by dogs!” declare the two actors), commenting on the ambitions of two countries on the brink of mutual destruction.

Hughes and Blaemire tackle their material with such enthusiasm; their seriousness is palpable, even taking into account the cornyness of the book and their imperfect vocals (the songs they wrote fit their range and abilities).

The rest of the production seems poised to overshadow the two stars and their story. Wilson Chin’s quaint design is compact and cluttered, full of drawers and speakers of various shapes and sizes, stacked on top of each other in Tetris style next to Soviet and American flags. Amanda Villalobos offers a fantastic design for puppets and props that unfortunately only becomes prominent in the last third of the show.

The lighting design (Mary Ellen Stebbins) is the boldest, full of neons and strobes. Projections, green screens and live cameras are also all prominent, and while the sky lights and scenery are dazzling, all these elements together provide a plethora of visual information that is often overwhelming.

What would my own dog think of such a show, I wondered as I left the theater. I bet he prefers to keep his paws on the ground.