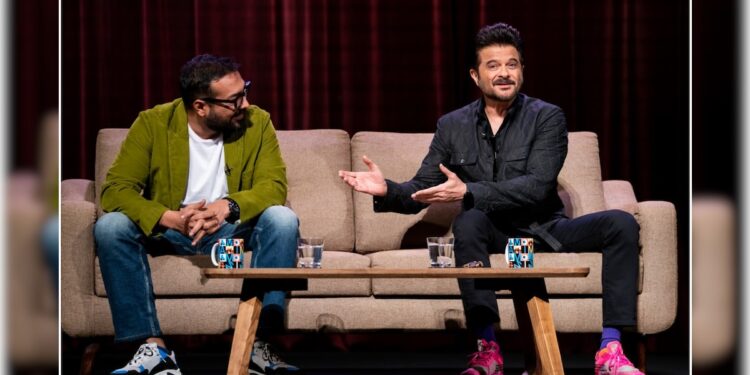 Easily one of the best Hindi films of the year, and certainly the most unique with a mainstream star in it, AK Vs AK has Anil Kapoor and Anurag Kashyap playing themselves amid heightened emotions, surreal moments and twisted plots. It’s different, enjoyable, trippy and a total blur between reality and fiction.

It all starts when an aging superstar AK (Anil Kapoor) gets into a heated argument with another AK (Anurag Kashyap), a self-obsessed filmmaker, and kidnaps Kashyap Kapoor’s daughter, actress Sonam Kapoor (Sonam Kapoor). Then a chase begins that, in a way, tries to bring out the paradoxes of a Bollywood star’s life and how they’re supposed to “do” even in depressing times.

Director Vikramaditya Motwane, whose placement of the handheld camera with gloomy surround lighting in Bhavesh Joshi Superhero impressed me a lot, is in an even better mood here as he gets voyeuristic, sensational and subcutaneous. I forgot to tell you that Motwane has a representative in Yogita Bihani, Kashyap’s assistant in the film, who records Kapoor’s movements.

Sure, some restrictions have been maintained, but Motwane has stretched himself to the limit as Kapoor and Kashyap show off self-mockery, almost about to upset viewers. For example, Kapoor taunts Bihani for being Kashyap’s girlfriend, or Harshvardhan Kapoor, Anil Kapoor’s son, who tries to impress Kashyap with his acting performance in the midst of a crisis.

The other side of a starry life is also revealed as onlookers keep asking Kapoor to do his famous Ram Lakhan steps, a song released more than three decades ago. The perception of a Bollywood star as the ultimate public influencer has been challenged. It’s so ironic and tragic to see Kapoor dance to please the crowd while searching for his missing daughter.

There are also plenty of Kashyap jokes, such as the one about his brother as the most commercially successful filmmaker in the family. Sometimes it even tries to look beyond Kashyap’s tough appearance as an outspoken, eternally angry person. It’s hard to figure out how much of this is “acting.” Full marks to Motwane for making his actors comfortable enough to let them visit the dark alleys of their subconscious mind where there is no good and evil, just the immediate response to obvious and present danger.

Interestingly, despite the handheld camera capturing everything, it’s not exactly a fly on the wall. The filmmaker has a fairly strong opinion about many developments. Motwane challenges his characters in no uncertain terms to make bold comments about Bollywood, insider versus outsider, and lack of resources. Needless to say, such tricks add depth to AK vs AK.

Kapoor has excelled. It’s funny even writing this because he plays himself, but we don’t know how much of this is unscripted! Kashyap has once again shown his love for unique material, exposing everything, sometimes literally. While Harshvardhan Kapoor stars in a cameo, Yogita Bihani also fits the bill.

Another beautiful film from Motwane’s repertoire. It reaches where mainstream Bollywood movies hesitate to go.