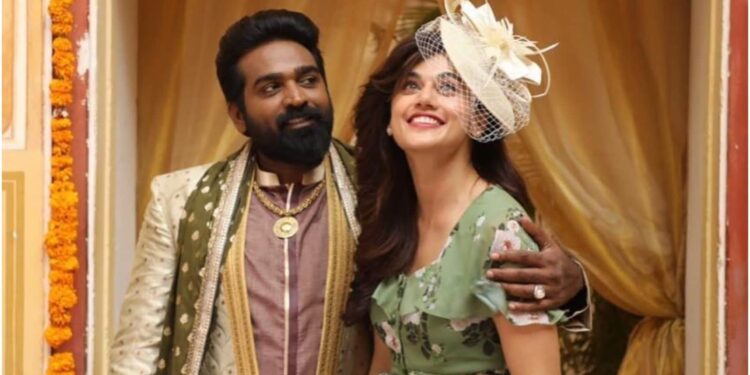 Annabelle Sethupathi tries to arouse curiosity in the viewer from the very first scene. A strange conspiracy of a bunch of ghosts trapped in a beautiful palace unfolds, without much logic as to why they are locked up there and can’t get out. Equally nonsensical is the only uncertain solution there is to their predicament. I’m still trying to get over the ridiculousness of the story, so I’ll try to summarize it as best I can.

The plot borrows from the oft-repeated trope of old haunted palaces, reincarnation, and disgruntled ghosts. A contemporary Indian reincarnation of a 1940s British woman (Taapsee Pannu) enters the palace built for her by a king (Vijay Sethupathi), is confronted by a bunch of ghosts that only she can see, who think she is their ticket to redemption.

The director’s assumption that this was a film worth making is as mind-boggling as the decision to cast Taapsee in both her British and Indian characters. In her pretty fedoras and floral dresses, she looks more like a model for a spring-summer fashion line than a 1945 woman. Indian groom. Costumes are key to establishing a period, and the creator’s lack of attention to this detail, among many others, is a clear indication of a job done without dedication.

Despite the drama surrounding a ‘beautiful palace’, there isn’t much to write home about production design. The film looks and feels like a school play with visibly blunt swords, cheap props and a bunch of grown actors who really run around like kids.

Horror comedies are in vogue in the movie industry and recently some have been created for you to watch. Annabelle Sethupathi’s title is taken from a Hollywood horror film, which is also mentioned in a dialogue. There are comedic scenes, there is romance, but horror? A total of one jump scare.

The one mind-boggling question that remained unanswered at the end of the 2:14 hour run was why would actors of the caliber of Vijay Sethupathi and Taapsee Pannu choose to star in a movie as nonsensical as this one? The emotions evoked in the romantic scenes between them, mainly because of Vijay’s low-key performance, are completely nullified by pointless chase sequences and slapstick humor in most parts.

Jagapathi Babu is a powerful presence as a silent but heartless villain, and his story is expected to continue in Part 2. Yogi Babu as the universal master chef carries the film largely on his shoulder. His dialogues may have a better impact in Tamil, but you know what Hindi copies of Southern movies sound like. Aside from that possible loss of translation, there’s nothing to miss if you skip this movie.