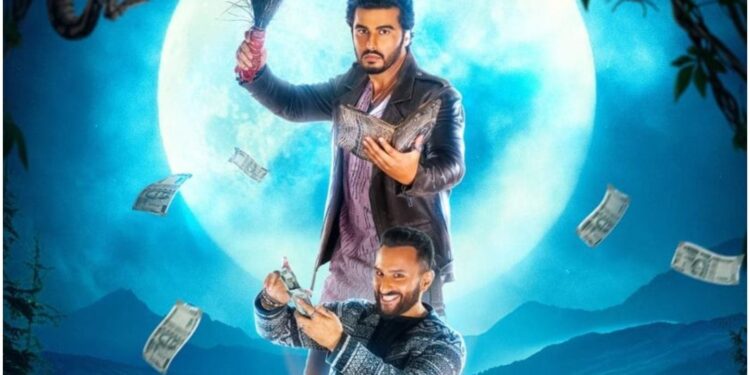 Bollywood is moving away from conventional horror, and lately has been warming up to the idea of ​​serving fears with a dash of humor. The horror comedy as a genre is suddenly in vogue among mainstream Hindi filmmakers and actors. Importantly, these movies try to serve the funny fears with a new-age spin and a message. The 2018 film Stree starring Rajkummar Rao and Shraddha Kapoor won at the box office and set a new benchmark for horror comedies in Bollywood.

Making a horror comedy is by no means an easy task; you have to make the audience laugh and scare them at the same time. Director Pawan Kriplani, who has made a career in the horror genre (Ragini MMS, Darr @ The Mall and Phobia), tries something different. Bhoot Police tackles the subject of whether ghosts exist or is it just superstition and ‘andhvishwas’ of people. The film succeeds reasonably well in this, but succumbs to the limitations of a horror comedy.

Vibhooti (Saif Ali Khan) and Chiraunji (Arjun Kapoor) are brothers and ghostbusters who try to earn a living pretending to be exorcists and scamming people by getting rid of their beliefs and superstitions about ghosts and supernatural powers. While Chiraunji wants to solve a real case, Vibhooti, ​​who is only interested in money and women, has a motto of ‘jab tak andhvishwas rahega tab tak humara dhanda chalta rahega’. Maya (Yami Gautam) goes in search of a tantrik named Ullat Baba, because there is a kichkandi on her tea plantation. Twenty-seven years ago, Ullat Baba, the father of Vibhooti and Chiraunji, had helped them get rid of the ghost. The duo decide to help her unravel the mystery behind the kichkandi, leading to a twist in the story.

For the most part, the film will put a smile on your face. The quirky one-liners are really funny. For example, a scene where Vibhuti asks a local for GST about their amount or while he comes out with a slogan ‘Go kichkandi go’ digging up at ‘Go Corona go’. But the funniest one-liner is when they take a stab at nepotism in the tantrik industry. One thing that works with this movie is the setup. It’s so absurd yet symbolic that you just burst out laughing. This film is made up of so many different elements and Kriplani handles them effectively.

At the same time, there are certain moments that scratch your head. Like the unnecessary subplot with a cop (Jaaved Jaaferi) who marries a goat and starts ‘maah-ing’ after seeing a ghost. Or cast Rajpal Yadav for a three-minute role that looks completely forced. The director also leaves the audience confused as to whether he wants to convey a message about superstition or wants them to believe in it.

Speaking of the performances, Khan is just lovely to watch on screen. His antics, along with near-perfect dialogue, keep the film lighthearted. Kapoor as the innocent and righteous sibling gives a heartfelt performance. The duo’s camaraderie keeps the pace high. Gautam gets her moments while Jacqueline Fernandez, who plays her sister, does a good job.

The last few minutes are a bit bland and there are certain aspects that don’t quite make sense. You also get some jump scares from time to time and the typical characters going crazy, but other than that, the film holds up well on its own. Overall, Bhoot Police is a decent one-off watch, at least for Khan, who seems to be in the best time of his career.​