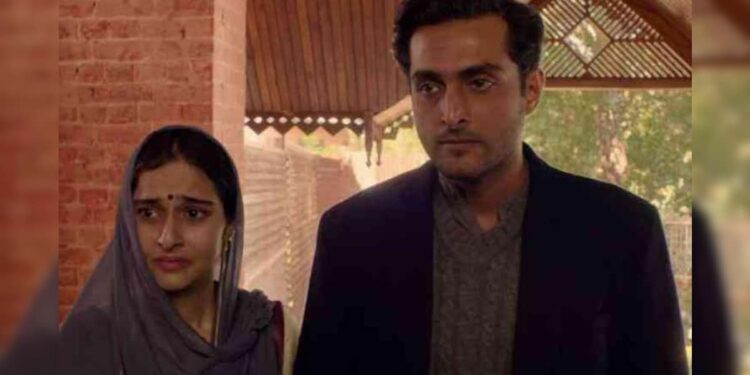 Shikara, by director-producer Vidhu Vinod Chopra’s own confession, is a love letter to Kashmir dedicated to the memory of his mother Shanti Devi, who, like multitudes of Kashmiri pandits, was unable to return home because of the uprising that began in the 1980s, which eventually resulted in a mass exit in January 1990.

It is certainly Chopra’s most personal film and perhaps for those reasons also the most sensitive.

The film opens with an elderly Kashmir couple who are visiting India to Agra at the invitation of the American president. However, as the scenes unfold, we realize that President is just a ruse, almost a metaphor of their lives of an elusive, almost fantastical desire that will never quite fulfill itself.

The life of Shanti (Sadia) and Shiv Kumar Dhar (Aadil Khan) is one of love. Shiv is a man of letters, a poet and a scholar while Shanti is a devoted wife. Their lives are idyllic in the most beautiful places in the world, namely Kashmir. Unfortunately, as their bond of love grows stronger, things start to get ugly in the valley.

What you see at the beginning of the film is a general bonhomie between people of different religions, but as the film progresses, the fault lines begin to appear until lives are torn apart and destroyed. Among the few films that tell the story of the exodus of Kashmiri pandits from the valley caused by the infiltration of extremists from neighboring Pakistan, Shikara stays away from setting the politics of the region. Instead, it dwells on Shanti and Shiv’s personal journey from the first flood of love to dusk. Their transition from a perfect home in Kashmir to a refugee camp in Jammu, they witness love and betrayal in equal measure.

Written by Vidhu Vinod Chopra, Abhijat Joshi and Rahul Pandita, the beauty of the film lies in dealing with ordinary lives brought by extraordinary circumstances, torn from their roots without knowing exactly why. Staying away from the aggressive narratives and optics guided by armed conflict, this is a grief-stricken silence. It mourns the unraveling of Kashmir’s tight-knit social fabric, which encompasses all religions. There are moments in the film, such as the time when Shiv meets a stranger wearing his own relative’s (Priyanshu Chatterjee) coat and persuades Shiv to sell his house in Kashmir, that are heartbreaking. Fortunately the cold shadows are dispelled by the triumph of good – like when a little boy chants incendiary mandir-masjid slogans and ends up being a leading neurosurgeon!

Visually, Shikara resembles a painting, a work of art with the delicate cinematography of Rangarajan Ramabadran accompanied by excellent production and costume design. AR Rahman’s music helps maintain the lilting tone that befits a love story.

However, it is with Chopra who wields the director’s baton where credit must rest for imbuing his labor of love with the element of authenticity; often an essential missing piece in Bollywood films. His choices for the lead role namely Sadia and Aadil Khan are impeccable. They proficiently creep into their characters of Shanti and Shiv, sensitive in their display of emotions, and rarely slip into a testosterone-driven frenzy.

Shikara is indeed an empathetic memoir of the tragedy of the Kashmiri people, one that gently points to love and forgiveness as the only way forward.