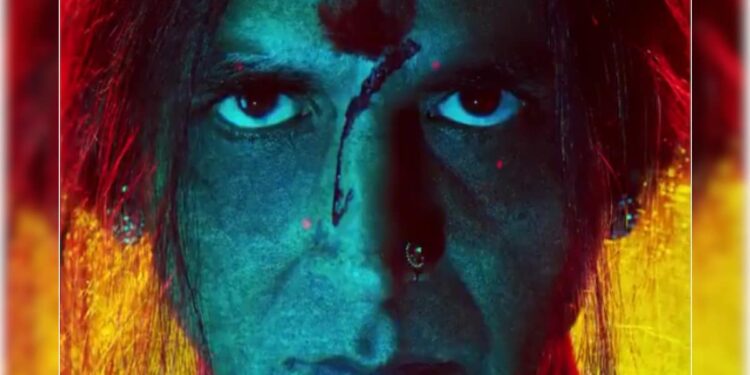 Laxmii was previously called Laxmmi Bomb, but the title offended so many sensibilities that the creators decided to change the name (keeping their numerological superstitions). They should have changed a lot more if they didn’t want to offend our senses.

This is the kind of movie where critics urge you to leave your brain at home, but how do you do that when it’s a direct to digital release and you’re forced to watch it from home where you’ve got a hundred better things to do than if you locked up in a multiplex where your time is exclusively spent with Akshay Kumar smiling to the couch? The opening track resembles a tribute to Rohit Shetty’s Golmaal songs, and it’s a smart move to keep expectations low from the get-go. I mention it because it seems like it’s the only thought put into this project.

The film isn’t centered around a plot, but rather about Akshay Kumar’s questionable comedic skills who are counting on them to score again at the box office. Possessed by not one but three ghosts, Akshay manages to make them all fail. Transgender Laxmii and her two followers possess Akshay’s body to take revenge on some villains so forgettable they should be forgiven if proverbs are to be respected. Asif played by Akshay and Rashmi played by a half-hearted Kiara Advani go to visit Rashmi’s parents after a three-year estrangement caused by the Hindu-Muslim marriage in which the nearby ghosts inhabit Akshay’s body, portraying them in horrific stereotypes.

Kiara looks like she’s auditioning for a role she’s already wrapped up that doesn’t prove her worth, aside from her athletic dance in the forced song “Burj Khalifa.” Rajesh Sharma and Ayesha Raza Mishra as Kiara’s parents are the best actors even if they do their worst.

There are some lazy efforts to promote communal harmony, but the laziest attempt is to empower transgender people. The graveyard Laxmii inhabits is numbered six as a nod to the term chakka, and Akshay is forced to eat his patriarchal threat of wearing bracelets. However, the film tries to make you believe that Akshay Kumar playing a transgender automatically makes them more powerful, but when he does it as a parody, you fail to understand how it gives transgender freedom of choice.

If you’re not the kind that cares much about political correctness and would rather be placated by silly comedy then this movie is still not for you as you can barely pick a funny line even if you’re trying to be nice this holiday season . There’s a blunt scene where the daughter-in-law punches the mother-in-law multiple times which is tailor-made to play for the gallery and you’re happy to be away from the theaters where you would invariably hear a few nasty laughs. This Diwali lets good win over evil, don’t let this Laxmii enter your house.