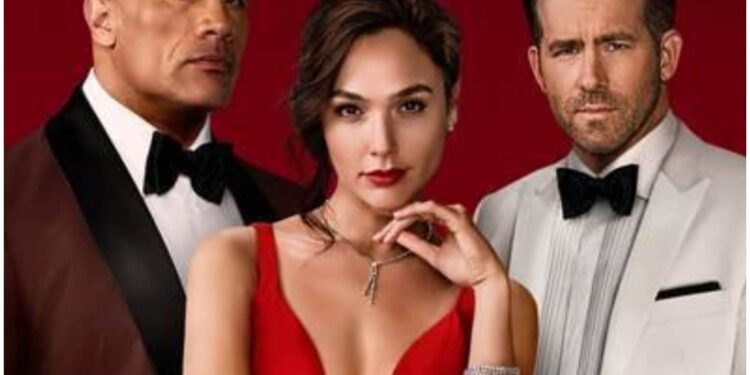 An explosive, adrenaline-pumping experience was what I expected from Netflix’s Red Notice (dubbed the streaming platform’s most expensive movie), but what I got was more. A complete rollercoaster ride around the world, the film will leave its viewers completely enthralled and exhausted by the end.

Before I get into the questions you want answered, let me first outline the story.

Cleopatra’s bejeweled eggs take center stage in Red Notice, a new action-adventure comedy from writer-director Rawson Marshall Thurber. The film opens with Nolan Booth (Ryan Reynolds), the world’s second-best art thief, prompting us to ask: who’s the best? It’s the elusive Bishop (Gal Gadot), who has teamed up with FBI special agent John Heartly (Dwayne Johnson) to capture Booth before tossing Cleopatra’s second egg from a museum. Why? To ensure that the numero uno spot remains unchallenged. But when Hartley is charged with a crime he is investigating himself, he is forced to team up with Booth to take down the Bishop once and for all.

During Red Notice, Renolyds and Johnson’s on-screen camaraderie is on point. It’s the USP of the film – exactly as the makers intended. The best part is that no actor strives for one-upmanship, but you see how they feed off each other’s energy. There is also a pleasant comedic atmosphere between the two actors. But it’s hard to take your eyes off Gadot, who promises a heartbreaking movie.

I could hear the men and even some women in the movie theater gasping every time Gadot came on screen, and I have to admit – I too was mesmerized when I saw her on screen. This is her movie.

In all honesty, it’s not just the action, it’s the sheer energy of the movie, and by that I mean the stunts, the gadgets, the songs, the locations, almost everything. It’s what I call ‘pulling out all the stops for entertainment’. The makers of this movie want you to lift your sense of disbelief and just go along for the ride, which you are absolutely willing to do, but that being said, there are some things that are just inexcusable.

Everything about the film is superficial: the script, the mystery and the direction. The contrived twist and double crosses (which almost make you feel like the director decided to take tips from Abbas-Mustan) evoke indifference and, as an audience, you can predict them with ease. The plot and formal storyline is what brings the movie down. It seems that Thurber decided to take an example from many Hollywood films of the past, including Mission Impossible, Ocean’s Eleven and even Money Heist.

Markus Förderer’s cinematography and Michael L. Sale’s editing deserve a mention for allowing the actors to salvage the poorly written script. When Reynolds is crazy and funny, Johnson is doing what he does best with his muscular body. Gadot is stylish and extremely slim when performing her stunts. The trio has a great energy that fills the big loopholes in the film.

Red Notice seems to have all the right ingredients for a franchise-ready adventure (Thurber left the ending open for a sequel), but something goes horribly wrong when the pieces are mixed together. At the same time, the film looks slick and shows off attractive A-list actors performing amazing stunts in beautiful locations around the world.

To answer your question: Is Red Notice worth watching?

I would definitely recommend it. The film is a high-profile bang-bang show that is popcorn entertainment at its best for action movie buffs.