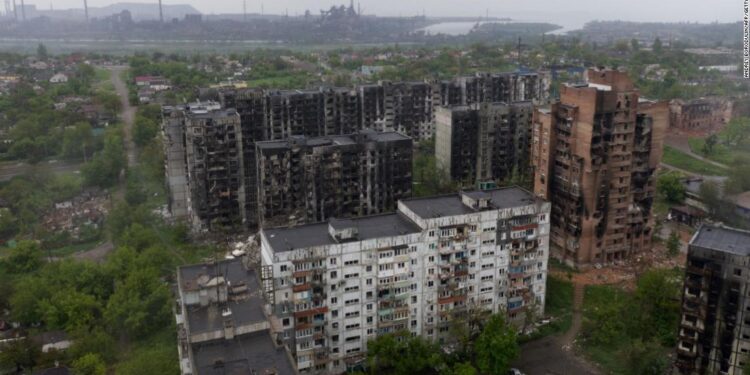 
At least six people have been killed in Russia’s attacks on the city of Severodonetsk in Ukraine’s Luhansk region over the past day, the head of the regional military administration said on Saturday.

The dead included two people who took shelter in a school basement, Serhiy Hayday said, adding that three people were also injured when Russians fired at the school.

“Two people died at the scene, three others were hospitalized. Two dead and one injured are members of the same family,” Hayday said in a statement to Telegram.

According to Hayday, residents of Severodonetsk had been hiding since the beginning of the war.

Two women were killed by Russian shelling in Lysychansk and Privillia, and a man and a woman died near their home in Severodonetsk, he said, without specifying how they died.

The Russians “have devoted all their troops and efforts to attacking Severodonetsk and cutting off the Lysychansk-Bakhmut route so that we cannot evacuate people, deliver humanitarian aid or deliver supplies or ammunition to our defenders,” the official said. . added.

Luhansk is one of two regions of Ukraine that has been partially controlled by Russian-backed separatists since 2014, along with Donetsk. The final phase of the Russian invasion includes attempts to take complete control of the regions.

“Fighting is currently underway on the outskirts of Severodonetsk,” said Hayday, who claimed Ukrainian forces had repulsed 11 enemy attacks. He said Ukrainian defenders destroyed Russian tanks, artillery systems and combat vehicles during the fighting and shot down two Russian drones.

A cooling tower at the Azot nitrogen-ammonia plant in Severodonetsk caught fire during a Russian attack, Hayday said, but the fire was extinguished and did not spread.

He said about 1,000 people were in the factory’s air raid shelters and said authorities have tried to provide these people with everything they needed: generators, water and humanitarian aid.

“Thank goodness there aren’t many chemicals there, as Azot wasn’t working at full power, like it used to be in Soviet times. But anyway, there are the remains of chemicals, which are dangerous and very explosive,” he warned.