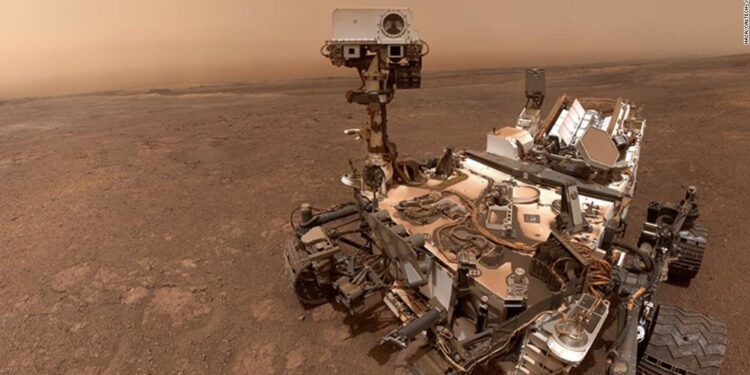 A new analysis of sediment samples collected by the rover revealed the presence of carbon — and the possible existence of ancient life on the red planet is just one possible explanation for why it might be there.

ADVERTISEMENT
ADVERTISEMENT
Carbon is the basis for all life on Earth and the carbon cycle is the natural process of recycling carbon atoms. On our home planet, carbon atoms cycle as they travel from the atmosphere to the ground and back to the atmosphere. Most of our carbon is in rocks and sediment, and the rest is in the global ocean, atmosphere and organisms, according to NOAA or the National Oceanic and Atmospheric Administration.

Therefore, carbon atoms – with their recycling cycle – are traces of biological activity on Earth. So they could be used to help researchers determine if life existed on ancient Mars.

When these atoms are measured in another substance, such as Martian sediment, they can shed light on a planet’s carbon cycle, regardless of when it occurred.

More information about the origin of this newly discovered carbon on Mars could also reveal the process of carbon cycling on Mars.

A study detailing these findings was published Monday in the journal Proceedings of the National Academy of Sciences.

Secrets in the sediment

Curiosity landed in Gale Crater on Mars in August 2012. Named after Australian astronomer Walter F. Gale, the 154.5 kilometer crater was likely formed by a meteor impact between 3.5 billion and 3.8 billion years ago. The large cavity probably once contained a lake, and now it includes a mountain called Mount Sharp. The crater also contains layers of exposed ancient rock.

For a closer look, the rover drilled between August 2012 and July 2021 to collect sediment samples over the crater. Curiosity then heated these 24 powder samples to about 1,562 degrees Fahrenheit (850 degrees Celsius) to separate elements. This caused the samples to release methane, which was then analyzed by another instrument in the rover’s arsenal to show the presence of stable carbon isotopes, or carbon atoms.

Some of the samples were depleted in carbon, while others were enriched. Carbon has two stable isotopes, measured as carbon 12 or carbon 13.

“The samples that contain extremely little carbon 13 look a bit like samples from Australia taken from sediment that was 2.7 billion years old,” said Christopher H. House, the study’s lead author and professor of geosciences at Pennsylvania State University. , in a statement.

“Those samples were caused by biological activity when methane was being consumed by ancient microbial mats, but we can’t necessarily say that on Mars, because it’s a planet that may have formed from different materials and processes than Earth.”

In lakes on Earth, microbes like to grow in large colonies that essentially form mats just below the surface of the water.

“All three of these scenarios are unconventional, unlike processes that are common on Earth,” the researchers said.

The first scenario involves our entire solar system going through a galactic dust cloud, something that House says occurs every 100 million years. The particle-heavy cloud can cause cooling on rocky planets.

“It doesn’t lay down much dust,” House said. “It’s hard to see any of these depositional events in the Earth record.”

But it’s possible that during an event like this, the cosmic dust cloud would have lowered the temperature on ancient Mars, which may have had liquid water. This would have led to the formation of glaciers on Mars, leaving a layer of dust on the ice. If the ice melted, the sediment layer including carbon would have been left behind. While it’s entirely possible, there’s little evidence for glaciers in Gale Crater, and the study authors said further research was needed.

The second scenario concerns the conversion of carbon dioxide on Mars into organic compounds, such as formaldehyde, by ultraviolet radiation. That hypothesis, too, calls for additional research.

The third way this carbon was produced may have biological roots.

If these kinds of depleted carbon measurements were made on Earth, it would show that microbes were consuming biologically produced methane. Although Curiosity has previously detected methane on Mars, researchers can only guess whether large plumes of methane were ever released from beneath the surface of Mars. If this were the case and there were microbes on the surface of Mars, they would have consumed this methane.

It’s also possible that the methane interacted with ultraviolet light, leaving a trail of carbon on the surface of Mars.

More drilling on the horizon

The Curiosity rover will return to the site where it collected the most samples in about a month, providing another opportunity to analyze sediment from this intriguing location.

“This research has accomplished a long-standing goal for Mars exploration,” House said. “To measure different carbon isotopes – one of the most important geological tools – from sediment on another habitable world, and this by looking at nine years of exploration.”