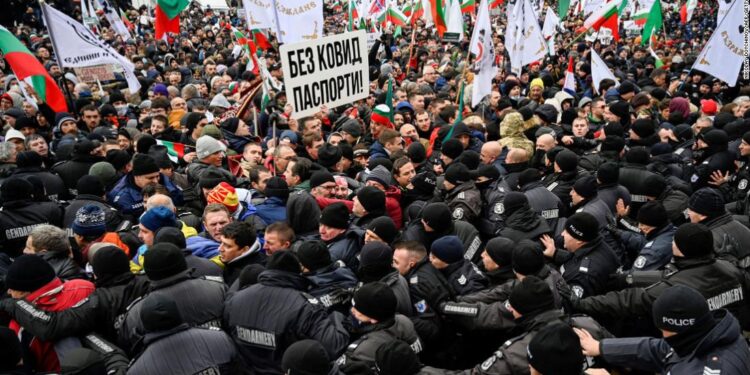 
Tensions rose an hour after some 3,000 people gathered in front of the parliament building demanding the lifting of a mandatory health pass that they believe violated their rights and acted as a back door to force people to get vaccinated.

Protesters, many of whom arrived on buses for the rally, pushed back a police cordon around parliament and reached the front doors of the building.

They stopped breaking in and called on lawmakers to come out and fulfill their demands. During the brief clashes, several people, including police officers, were injured.

Waving national flags and flags of the ultra-nationalist Revival party, which organized the rally, they chanted “Freedom” and “Mafia” denouncing all measures against the virus.

“I do not approve of the green certificates. I do not agree that the children are stopped from going to classes. I do not see the logic of these things,” 39-year-old engineer Asparuh Mitov told Reuters at the start of the rally. .

Bulgarians are required to wear masks inside and on public transport and show a health pass, which is given to people who have been vaccinated, recovered or tested negative for the virus, to enter restaurants, cafes and shopping centers and gyms.

Prime Minister Kiril Petkov, who took office last month and pledged to encourage vaccinations in the Balkan country, told BTV that he regretted not being able to meet the protesters but was ready to do so on Friday, when his quarantine is over. . Petkov, President Rumen Radev and senior ministers went into self-isolation after a participant in a security meeting they attended on Monday tested positive for the coronavirus.

He reiterated that the health pass would not be lifted.

“Right now, as the cases increase, and with understanding of the link between the number of people vaccinated and the health pass, it cannot be lifted,” Petkov said.