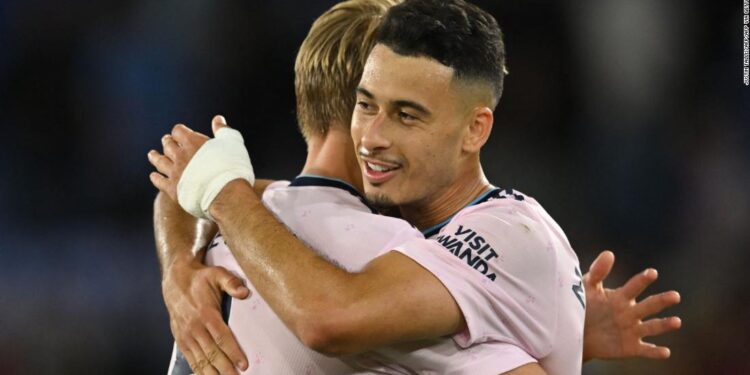 A header from Gabriel Martinelli in the first half and an own goal from Palace defender Marc Guehi secured the three points as the league returned after just a 75-day break.

Arsenal manager Mikel Arteta said he was happy with the first win on the board after what turned out to be a tough game.

“We showed great resilience to get through it, and it’s really positive how we started.

The Arsenal team came under closer scrutiny with the season opener the same week as the release of the Amazon documentary series “All or Nothing”, which documented the squad’s previous campaign.

But the visitors didn’t look phased as the bevy of young stars started the match in brilliant form.

New signing Gabriel Jesus looked great at times and gave Arsenal extra intensity in the final third, while 21-year-old defender William Saliba was impressive in what was his first league appearance for the Gunners. Saliba had previously been loaned to the club.

There was also a debut for Ukrainian captain Oleksandr Zinchenko, who made the switch to the Emirates after his departure from Manchester City.

The defender gave his new side some extra composure and was on hand to assist on Martinelli’s header after a well-crafted corner.

While Arsenal’s performance in the second half looked a bit sloppy at times, it was a positive start to the campaign that came with a lot of expectations.

Fans will be demanding a place in the top four after what appears to be a strong transfer window and an impressive preseason.

League games have started a week earlier than usual this year as the men’s World Cup is played mid-season and fans will be excited for a full run of games over the weekend.