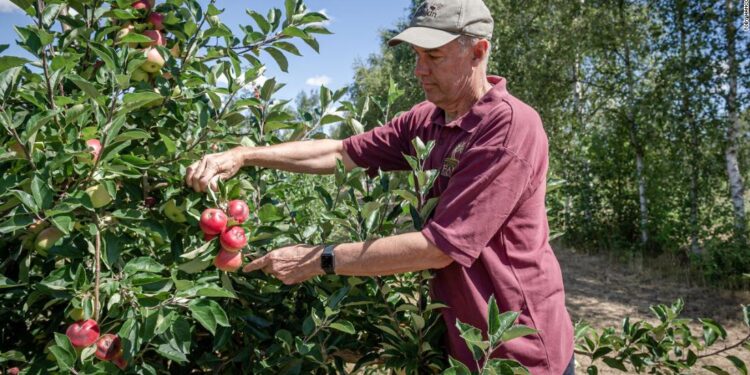 As they walk through their orchard at Lathcoats Farm, the apples on many trees are visibly scorched, their skins have turned brown in parts, the flesh underneath has turned corky. A significant portion of the farm’s harvest has been unsaleable this year.

A record-breaking heat wave in July literally baked the apples on their branches, but Philip Taylor, who runs the farm with his cousin, now has bigger things on his mind. The ground under the trees is cracking with drought — they’ve had so little rain this spring and summer. Even last winter, when rainwater normally stores in the ground to keep it moist for months, it just wasn’t wet enough.

England had its driest July since 1935, and the southern part of the country, including Lathcoats Farm, received just 17% of the average rainfall for the month, according to the UK Met office. There is also no significant amount of rain on the horizon.

The water level in reservoirs is falling rapidly and rivers are drying up. Even the River Thames that flows through London has shrunk, the first 5 miles dried up and disappeared. Thirteen rivers monitored by the Environment Agency are at the lowest level ever recorded.

The climate crisis, caused by the burning of fossil fuels, is making hot weather, droughts and floods more frequent and intense in the UK, and the hotter the planet gets, the worse these effects will be.

But for farmers of thirsty crops like apples, there’s no substitute for rain coming straight from the sky.

“Growing apples isn’t going to work if we have summers like this every year,” Taylor told DailyExpertNews at his farm, 40 miles north-east of London. “Our access to water at the moment is purely from the grid. Watering apple trees enough to produce a decent crop would be way too expensive.”

Fortunately, Taylor has other sources of income. His family has turned the farm into an attractive place to visit, with a cafe and farm shop selling Lathcoats apple juice, fresh produce, organic bread and pastries. People also come here to pick their own fruit, which makes it a fun day out, especially for young children.

He and his cousin also sell soft fruits, such as berries and plums, which can be watered with irrigation. But even that water is becoming scarce and they can’t afford to take some of the measures larger farms are taking to protect themselves from extreme weather.

“So as for what we’re doing about it, well, we’re just concerned,” Taylor said. “We may just stop growing apples. We will definitely consider what varieties to plant in the future. Some will withstand these temperatures better than some of the traditional English ones we grow now.”

Every day 3 billion liters of water are lost through leaks

Hose bans are forcing people to find less wasteful ways to replenish their gardens and wash their cars. Filling a paddling pool, as some English do on hot days, is also prohibited in many areas.

But it’s not just consumption that’s a problem, or even lack of rain – the UK’s infrastructure is hundreds of years old and highly leaky. In England and Wales 3.1 billion liters of water – enough to fill 1,240 Olympic swimming pools – are lost every day through leaks.

“There’s a real disrespect for the water that we have, this really, quite precious resource,” Hannah Cloke, a climate scientist and hydrologist at the University of Reading, told DailyExpertNews. “We drink it, we use it to grow our food, and yet we still have it leaking everywhere. That’s one of the biggest problems. The water companies are just leaking it — they really dropped the ball there.”

Water UK, which represents 12 major water companies across the country, said much had already been done to plug the leaks.

“Companies are increasingly putting innovation and technology at the heart of these efforts,” the organization said in a statement to DailyExpertNews. “Intelligent grids, smart sensors, satellite technology and drones are all part of the arsenal deployed to detect and fix leaks faster than ever before.”

The companies represented by Water UK are also planning to invest £14 billion ($17 billion) in reservoirs and plans to move water around the country, “enough to supply 10 million people” so that it can be preserved for special needs. dry times like this one.

Another problem is that only about half of homes in England and Wales have water meters, which allow businesses to bill customers based on their actual consumption. The rest just pay what the companies estimate a house their size could use.

Cloke said water companies may not want to expand the measurement, which could hurt their bottom line, assuming people were more careful about their consumption.

“Water companies will want to make money selling water, so it’s in their best interest to keep selling even when there are restrictions,” Cloke said. “We don’t have this all right, but water companies don’t have the incentive to do the right thing, environmental-wise, and that goes for pollution and flooding, but also drought and leakage. “Let’s just keep going, business as usual.” “

The British Center for Ecology and Hydrology warned on Wednesday that the drought, which now affects much of the country, could last until at least October. The center is looking just a few months ahead and there are concerns that the country could also have a second consecutive dry winter, even next year.

That could be catastrophic not only for households, but also for food security, which has already been undermined by the Russian war in Ukraine and droughts in other parts of Europe. It would also push up food prices even further, fueling inflation that is already hurting millions of people in the country as mortgage rates and rents rise and energy prices soar.

Taylor told DailyExpertNews from his ranch: one after the other.

“Everything happened at once,” he said. “You could start with Brexit and move on to Ukraine, and then Covid. And now climate change is really starting to hurt.”

On the other side of London, to the south, the English county of Kent is known as the Garden of England for the green rolling hills, fertile land and orchards that supply the nation with strawberries, apples and pears. It is also a place that attracts green-fingered people, who come to live here and create large gardens in their homes.

David and Margaret Miller have lived in their home in the Kentish town of Edenbridge for some 40 years. The couple showed DailyExpertNews photos of what their garden once looked like: a lush green oasis of geraniums, azaleas, dahlias, cannas and echinacea plants. They also released several certificates to show their accolades from the local Edenbridge in Bloom horticultural competition, which they have won several times.

Now their front yard is dried out and brown from lack of rain. Some of their dahlias haven’t bloomed at all in the heat, and the pink echinacea flowers have completely withered, their petals drooping.

The couple has made the decision to try and just water the flowers and plants they care about most. While not yet subject to a garden hose ban, they have switched to watering cans “to do the right thing,” Margaret Miller said. That makes what was once a 30-minute job twice as long. In this heat, they sometimes need to water their selected plants twice a day to keep them alive.

It is not an easy task for David, who is 84 and suffers from vertigo, or Margaret, 80, who has problems with her hip. And their garden is everything to them. A hobby and refuge that has helped them through the worst of the pandemic.

“Seeing them all wither in the heat makes you feel sad,” Margaret Miller said of her plants. “Because you’ve nurtured them over time.”

She agrees that people should conserve water as a precious resource, but she is frustrated that her garden has to suffer as the land loses so much to leaks every day.

“I feel pretty angry about that because then they come up with a reason like, ‘Oh, we have a drainage system that’s hundreds of years old, and it’s not the water companies’ fault.’ But I would have thought that these days they have equipment that allows them to see where these leaks are and fix them,” she said. “I’m sure they make a lot of money, so why don’t they plow it back in? It makes me angry.’ 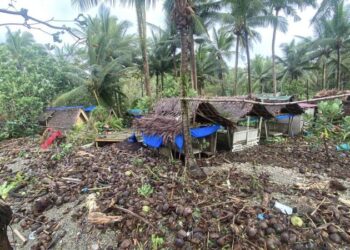