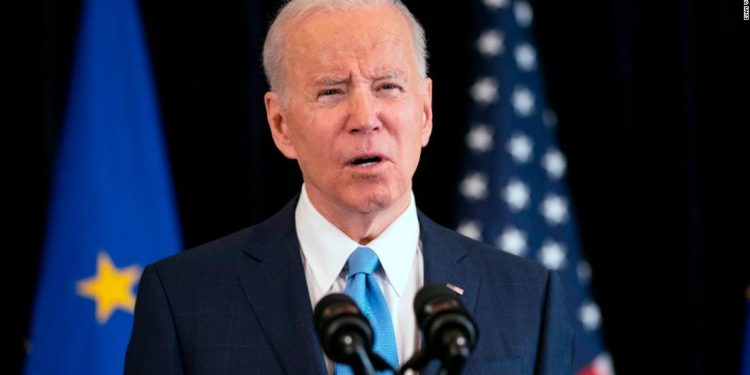 
Speaking in Brussels with European Commission President Ursula von der Leyen, Biden said Russia was using its oil and gas supply to “force and manipulate its neighbors”. He said the United States would help Europe reduce its dependence on Russian oil and gas and ensure that the continent has sufficient supplies for the next two winters. The announcement came just before Biden left Brussels for Poland.

“It will take some time to adapt the gas supply chains and infrastructure that (was) built over the past decade, so we will have to make sure that families in Europe get through this winter and into the next winter as we build. infrastructure for a diversified, resilient and clean energy future,” Biden said.

Biden and von der Leyen announced a joint task force aimed at helping Europe wind down its dependence on Russian oil and gas. The panel, chaired by representatives from the White House and the European Commission, will focus on finding alternative supplies of liquefied natural gas (LNG) and reducing overall demand for natural gas in the future.

Europe’s reliance on Russian gas and oil has proved a major sticking point in Western efforts to punish Moscow for its invasion of Ukraine. While the US banned Russian energy imports, Europe found it much harder to cut off its supplies.

“I know that eliminating Russian gas comes at a cost to Europe, but it is not only the right thing to do from a moral point of view, it will give us a much stronger strategic foundation,” he said.

The US will work to supply Europe with at least 15 billion cubic meters of liquefied natural gas by 2022, in partnership with other countries, the White House said. The group will also work to reduce greenhouse gas emissions by reducing methane emissions and using clean energy to power operations.

Senior government officials said the 15 billion cubic meters of liquefied natural gas comes from multiple sources, including the United States and countries in Asia. But officials didn’t have an exact breakdown of where the gas came from. The announcement on Friday marked the culmination of US efforts in recent months to identify alternative energy sources for Europe, particularly in Asia. Officials said those efforts would continue this year to meet the target.

“This crisis is also an opportunity. It’s a catalyst,” Biden said. “A catalyst that will drive the investment we need to double our clean energy goals and accelerate progress toward our net-zero emissions future.”

Friday’s big energy announcement came during the president’s final stop in Brussels, before traveling to Poland.

After arriving at Poland’s Rzeszów-Jasionka airport later Friday, Biden is expected to receive a briefing on the humanitarian response to the war. He meets soldiers of the 82nd Airborne Division in Rzeszów before traveling to Warsaw in the evening.

On Saturday, the White House says Biden will hold a bilateral meeting with Polish President Andrzej Duda to discuss how the US and allies are responding to the refugee crisis created as a result of the war. The White House has confirmed that Biden will also meet Ukrainian refugees and US humanitarian aid workers in Poland. And he will make comments, billed by the White House as an important address, before returning to Washington.

The White House has said the visit to Poland is intended to highlight the massive refugee crisis that has emerged since Russia’s war in Ukraine began a month ago.

More than 3.5 million refugees have now fled Ukraine, according to data from the United Nations Refugee Agency released Tuesday. A vast majority of those refugees have fled to Ukraine’s western neighbors across Europe.

Poland, which borders Ukraine to the west, has registered more than 2 million Ukrainian refugees entering the country. However, the number of refugees residing in Poland is lower, and many continue their journey to other countries.

During Vice President Kamala Harris’ trip to Poland earlier this month, Duda personally asked the Vice President to speed up and simplify procedures that allow Ukrainians with family in the US to come to the country. He also warned Harris that his country’s resources were under heavy pressure from the influx of refugees, even as Poland welcomes them with open arms.

The White House says the US has provided more than $123 million since Feb. 24 to help neighboring countries of Ukraine and the European Union deal with the refugee flow, including $48 million in Poland.

At a news conference on Thursday, Biden told reporters he didn’t think a first look at the refugee crisis while in Poland would necessarily change his response.

“What it will do (is) it will strengthen my commitment to have the United States ensure that we are an important part of the relocation of all those people, as well as the humanitarian aid that is needed, both inside and outside Ukraine,” said the president. said chairman.

Biden put forward that he has visited war zones and said he understood the plight of refugees.

Biden also said the refugee influx is “not something that Poland or Romania or Germany should bear alone”.

“This is an international responsibility. And the United States, as … one of the leaders in the international community, has a duty to be involved — to be involved and do everything we can to alleviate the suffering and the pain.” of innocent women and children, and men for that matter, all over Ukraine and those who have crossed the border,” Biden continued.

The trip to Poland also comes two weeks after the US rejected Poland’s proposals to facilitate the transfer of its MiG-29 fighter jets to Ukraine.

The US rejected Poland’s proposals over fears that the US and NATO could be seen as an escalating move, further fueling the conflict between the alliance and Russia – adamantly opposing Ukraine’s ambitions to join the join NATO alliance.

Ukrainian President Volodymyr Zelensky has repeatedly called for more planes for the invasion, again calling on NATO leaders on Thursday.

During a virtual speech Thursday, Zelensky asked NATO members for “1% of all your planes,” later adding: “You have thousands of fighter jets, but we haven’t gotten any yet.”

Despite Zelensky’s plea, a senior US official told DailyExpertNews later on Thursday that the US position on the issue of the fighter jets has not changed.

This story was updated Friday with additional developments.

Kaitlan Collins of DailyExpertNews contributed to this report.