Biden to speak at long-promised virtual ‘Summit for Democracy’ 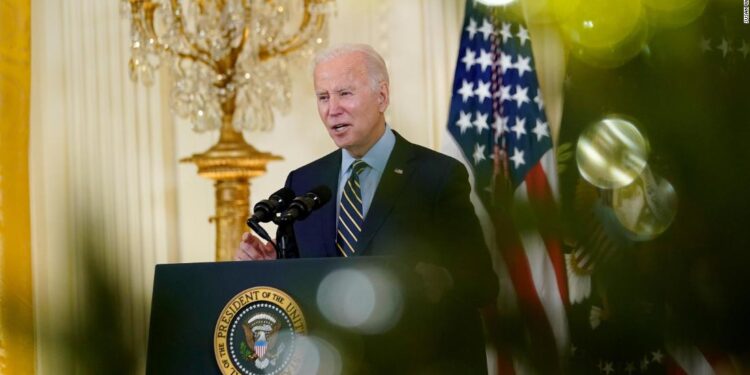 
The virtual meeting of leaders aims to fight corruption, defend against authoritarianism and promote human rights. It’s part of a broader theme that Biden has often reinforced during his tenure—that the global competition of the 21st century is one defined by democracies versus autocracies and that America has a responsibility to ensure that democracies prevail. Since taking office last January, Biden has pledged to hold the meeting as a show of force against autocracies around the world.

Karine Jean-Pierre, deputy White House press secretary, told reporters on Wednesday that the summit’s focus will be “on what the president has called ‘the challenge of our time’ — reversing the ongoing global democratic recession and ensuring that democracies satisfy their people.”

The summit comes after a week in which Biden confronted two emerging global authoritarian powers — Russia and China — over their actions.

ADVERTISEMENT
Earlier this week, Biden held a two-hour meeting with Russian President Vladimir Putin, in which he threatened economic sanctions against Russia in an attempt to stop him from invading Ukraine. The White House also recently announced that US diplomats would boycott the 2022 Winter Olympics in China in response to the country’s ongoing human rights violations.

According to the White House, Biden will make an opening address during Thursday’s program and participate in a leadership plenary meeting.

The president is separately expected to speak with Ukrainian President Volodymyr Zelensky “to discuss Russia’s military buildup on Ukraine’s borders” and the Bucharest Nine group “to brief them on his conversation with President Putin, their views on hear the current security situation and underline the United States’ commitment to transatlantic security.”

Ahead of the summit, the White House highlighted provisions in Biden’s social safety net bill, which has yet to be passed by the Senate. The government says many of the facilities will make “essential investments in American democracy,” such as expanding broadband access, establishing a civilian climate corps, investing in civilian infrastructure and providing tax credits for local newsrooms.

The White House also says the administration is “taking bold action around the three broad themes of the summit: strengthening democracy and defending against authoritarianism; fighting corruption and promoting respect for human rights.”

A White House statement ahead of the summit also promoted the administration’s “decisive action to restore and strengthen American democracy, from cracking down on corruption and promoting transparency to taking critical steps to ensure that the federal government works for every American — no matter what they look like.” like or where they live.”

“This case will be a guiding principle during the time the president is in office, and that will include prioritizing the fight to get the Freedom to Vote Act and pass the John Lewis Voting Rights Advancement Act to defend the sacred right to freedom. , to vote fairly and safely.” elections,” the statement said.

When asked on Wednesday whether the president would use the summit to talk about what he is doing to uphold democracy in the US — including regarding the January 6 uprising and the fight to get voting rights legislation passed — Jean said -Pierre: “I don’t want to prejudge what the president is going to say tomorrow, but … all the things you just mentioned … are clearly things that the president thinks are the most important and important things that we need to discuss here in our country. “

In addition to existing actions, the White House has proposed new initiatives aimed at the goals of the summit.

On Wednesday, the White House announced that an interagency Information Integrity Research and Development Working Group will develop a strategic plan “to better understand the entire information ecosystem.”

Also on Wednesday, “day zero” of the democracy summit, Secretary of State Antony Blinken announced that the US will provide new funding to protect reporters targeted for their work and to support independent international journalism.

The new “liability fund” will “support reporters and news organizations who are the target of lawsuits as a result of their coverage,” Blinken said.

Following the summit, the Biden administration will “convene government, civil society and private sector partners for a year of consultation, coordination and action to advance democracy,” the White House said.

The White House says Biden plans to bring world leaders together again in a year’s time “to demonstrate our collective progress and pave a way forward.”

The government has been criticized for its guest list for the summit. Invitees include representatives from countries with poor records of democracy, rule of law and human rights, including the Philippines, Pakistan, Nigeria, Brazil and Turkey.

Michael Conte of DailyExpertNews contributed to this report.