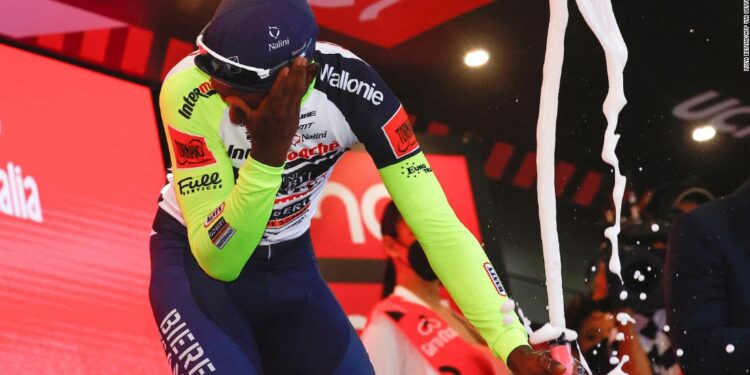 Eritrean Girmay became the first black African to win a stage of one of the Grand Tours when he defeated Dutchman Mathieu van der Poel in the 10th stage of the Giro between Pescara and Jesi.

However, the 22-year-old had to give up the race after a prosecco cork exploded on the podium in his left eye.

According to his Intermarché-Wanty-Gobert team doctor Piet Daneels, Girmay suffered a haemorrhage in the anterior chamber of the eye and was advised to avoid physical activity.

“Our priority is a complete recovery of the injury and that is why we have decided together with the rider and the sports director that Biniam will not appear at the start of the 11th stage,” said Daneels.

After undergoing medicals on Tuesday, Girmay was able to return to his hotel to celebrate with his teammates.

“The team did almost 99 percent (from) the beginning to the end,” said Girmay.

“I’m really happy with the team(s) what they’ve done; everyone, they’re super motivated before the start, during the race, after the race, we really helped each other, we supported each other. It was a good atmosphere .”

Girmay, who made his Grand Tour debut at the Giro this year, got stuck in a sprint finish with Van der Poel in the final 200 meters of Tuesday’s stage and stopped the Alpecin-Fenix ​​rider to seal the win. .

Van der Poel was also hit by an exploding prosecco cork after the first stage of this year’s Giro, but luckily for him was unharmed after hitting his face.

The Giro started on May 6 and ends on May 29. Spaniard Juan Pedro López currently leads the general classification, ahead of Portugal’s João Almeida and Frenchman Romain Bardet.