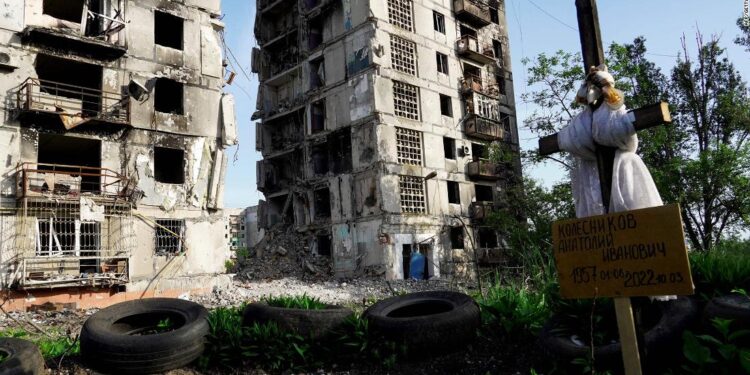 
Russia’s defense ministry claimed on Tuesday it had opened a land corridor into Russian-occupied Crimea, allowing civilians and goods to pass through eastern Ukrainian territory now under its control.

Russian Defense Minister Sergei Shoigu said in a conference call on Tuesday that the military, in conjunction with Russian Railways, had repaired 1,200 kilometers (745 miles) of train tracks and opened roads to allow “full-fledged traffic” between Russia, the Donbas region in Eastern Ukraine. and Crimea, the peninsula annexed by Russian forces from Ukraine in 2014. Water supply through the North Crimean Canal — a lifeline for Crimea — had also resumed, Shoigu said.

According to an official readout of the call, Shoigu said the land corridor allowed Russia to begin delivering goods to Mariupol, Berdiansk and Kherson, southeastern Ukrainian ports that have been occupied by Russia since it launched its invasion in late February.

He claimed the ports of Mariupol and Berdiansk were functioning normally and ready to ship grain amid international condemnation over Russia’s months-long blockade of key ports that left millions of tons of grain languishing in Ukraine.

According to the instructions of the Supreme Commander (Russian President Vladimir Putin), we are ready to load grain into the ports,” Shoigu said.

Earlier Tuesday, Kremlin spokesman Dmitry Peskov reiterated that Ukraine must mine coastal waters to allow grain ships to pass and ensure that Russia will facilitate their passage and not use the demined sea corridors to attack Ukraine.

“President Putin… said Ukraine must clear the entrances to the ports so that the ships, after being checked by our military to make sure the ships don’t import weapons, can enter the port, load with grain and then, if necessary, even with our help, go to international waters,” Peskov said during a regular conference call.

Some background: The minister’s remarks come after world leaders condemned a months-long blockade by Russian forces at key ports in Ukraine — including Mariupol on the Sea of ​​Azov and Odessa on the Black Sea — that has left more than 20 million tons of grain trapped in the country. In a UN Security Council speech Monday, European Council President Charles Michel accused the Kremlin of “using food supplies as a stealth missile against developing countries” by taking millions of tons of Ukrainian grain hostage and blocking Ukraine’s ports. .