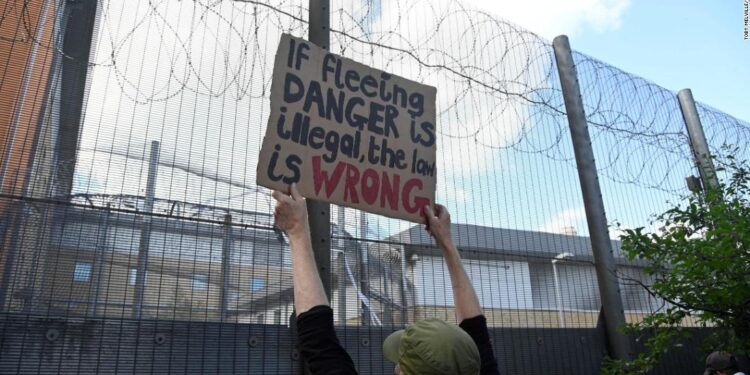 According to British news agency PA Media, “all migrants have been removed from the plane and the flight to Rwanda will not depart tonight as planned.”

But on the night the plane was due to take off, the ECtHR issued a series of rulings in the cases of the last asylum seekers who traveled to Rwanda, ordering the British government not to remove them.

In its ruling for an Iraqi citizen, the ECtHR said: “The European Court has advised the British government that the applicant should not be removed from Rwanda until three weeks after the final domestic decision is issued in its pending judicial review procedure.”

The ECtHR essentially ruled that that asylum seeker had not exhausted all legal proceedings in the UK, with UK courts planning to hear the applicant’s judicial review in July, and should not be removed until he did.

“BREAKING: Last ticket cancelled,” Care4Calais tweeted after the news of the flight cancellation. “NO ONE GOES TO RWANDA.”

London Mayor Sadiq Khan also responded by tweeting: “The inhumane deportation of asylum seekers to #Rwanda tonight has been halted by the ECtHR – minutes before it was due to leave. Sending people fleeing violence to a country thousands of miles away , was already cruel and insensitive. It may now also be illegal.”

The development is a rejection by the British government after Foreign Secretary Liz Truss said the deportation flight would depart no matter how many people were on board.

UK Home Secretary Priti Patel said on Tuesday evening she was “disappointed” that the flight had been halted and that her office was reviewing the legality of the decision. The government plans to move forward with the project, she also said.

“Access to the UK asylum system should be based on need, not on the ability to pay smugglers. The demands on the current system, the cost to taxpayers and the blatant abuses are mounting, and the UK public is rightly fed up” said Patel.

“I have always said that this policy will not be easy to achieve and I am disappointed that legal challenges and last minute claims have prevented today’s flight from departing,” she added.

Despite attempts by the government to justify the scheme, criticism of the plan has continued to grow. Church of England leaders called it an “immoral policy that puts Britain to shame” in a joint letter to The Times on Tuesday.

“Rwanda is a brave country recovering from a catastrophic genocide. The shame is ours as our Christian heritage should inspire us to treat asylum seekers with compassion, fairness and justice, as we have done for centuries,” the letter reads. .

“Many are desperate people fleeing from unspeakable horrors. Many are Iranians, Eritreans and Sudanese citizens, who have an asylum rate of at least 88 percent,” it continued. “We cannot offer asylum to everyone, but we must not outsource our ethical responsibilities or override international law that protects the right to seek asylum.”

In response, Truss told Sky News that Rwanda’s flight policy was “completely moral” and critics “must propose an alternative policy that will work”.

Care4Calais said the reason the majority of refugees are male is because of fleeing their homelands where “young men can be killed to avoid rebelling against the government, or being forced into military service.”

It also explained that the trip to Calais is “incredibly dangerous” and that “many families will not risk the safety of their daughters on a trip to Europe. The hope is that the men who escape will then take them to safety.” bring.”

Almost all people who come by small boats – 98% off those who arrived in 2020 – have applied for asylum.

The Refugee Council said most of the people who come across the Channel in small boats are likely to be genuine refugees fleeing persecution.

Home Office statistics show that people who come to the UK from Iran (88%), Eritrea (97%) and Syria (98%) generally have high chances of being granted asylum.

The odds are significantly smaller for Iraqi citizens – only 48% of decisions made in 2021 were positive.

Overall, the Refugee Council said about 75% of the first asylum decisions made in the year to March 2022 were positive and that of those rejected, about half were able to appeal asylum.

More recently, the number of people getting on small boats has been increasing. The interior ministry said 4,540 people arrived in the first three months of the year, more than three times more than in the same three months in 2021.

The UK has said it will pay Rwanda £120 million ($145 million) over the next five years to fund the program. In addition, the UK has also pledged to pay the processing and integration costs for each person relocated, including the costs of legal advice, staff, translators, housing, food and healthcare.

According to a parliamentary inquiry briefing, the UK government said it expects these to be comparable to asylum processing costs in the UK, which are around £12,000 per person.

The UK has refused to disclose the cost of the flights it will charter to transport deportees to Rwanda. The Home Office said in its latest annual report it paid £8.6million to charter 47 deportation flights carrying 883 people in 2020. While the cost of individual flights varied depending on destination, the figures mean the Home Office averages £183,000. spent per flight or £9,700 per person.

With no limit on the number of migrants, thousands could potentially pour into the capital Kigali in the first five years of the plan.

‘We do this for the right reasons’

Ahead of the plane’s previously scheduled departure, the Rwandan government said it was ready to receive asylum seekers from the UK and would do its best “to make sure the migrants are taken in”.

“We ask that this program is given a chance,” said Yolande Makolo, spokeswoman for the Rwandan government, at a news conference in Kigali on Tuesday.

Makolo responded to the condemnation of Church of England leaders, saying: “We don’t think it’s immoral to give people a home – something we’ve been doing here for over 30 years.”

“Where we come from, we do this for the right reasons. We want this to be a welcoming place and we will do our best to make sure the migrants are taken care of and that they can build a life here,” she added to.

Although Rwanda offers to assist in the resettlement of migrants to a third country by providing travel transport if they manage to obtain legal residence, “the primary objective is [of the scheme] is to fully integrate them into Rwandan society,” said Doris Uwicyeza Picard, chief adviser to the Minister of Justice.

“There are legal pathways to citizenship for migrant workers and refugees, provided they are eligible for citizenship,” she added.

The settlement will last five years, but Rwanda plans to turn it into a binding treaty at a later stage, Picard said.

Bethlehem Feleke, Nada Bashir and Chris Liakos of DailyExpertNews contributed to this report.