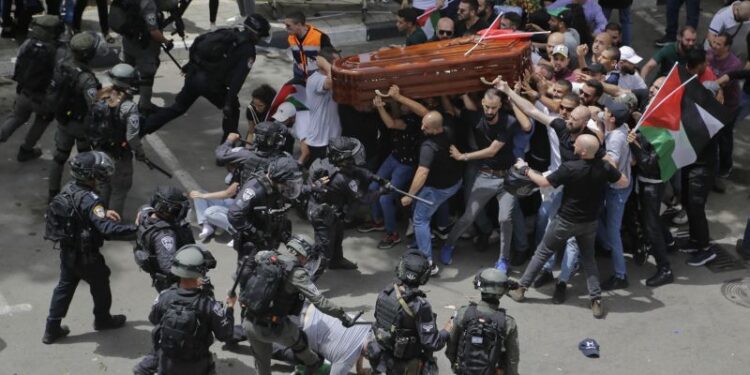 
The brother of murdered Al Jazeera journalist Shireen Abu Akleh called the violent intervention of the Israeli police at her funeral Monday “unacceptable and unjustifiable”.

“They could have easily blocked the road if they didn’t want the funeral to leave the hospital, but the attack was deliberate and brutal,” Tony Abu Akleh told DailyExpertNews.

Speaking at St. Joseph Hospital in East Jerusalem, where Friday’s funeral procession began, he said he had spoken to Israeli police before the event.

“The police called me and asked me to go to the police station and they wanted to know the route of the procession and the arrangements for the funeral. They asked us not to hoist any Palestinian flags, no slogans or chants. They didn’t want to hear that,” Abu Akleh said.

“And they wanted to know the number of participants in the funeral procession. I told them I can’t promise you anything, I don’t have the numbers and I don’t control the crowd. This funeral is a national funeral that anyone can participate in. And that’s what we saw,” he added.

The hospital issued a statement Monday condemning the “violent interference by the Israeli police”.

“We, the Bishops and the faithful of the Christian Churches in the Holy Land, hereby condemn the violent interference of the Israeli police in a funeral procession of the murdered journalist Shireen Abu Akleh, while it was moving from St. Joseph Hospital to the Greek – Melkite Cathedral Church,” the statement said.

“The invasion of the Israeli police and the disproportionate use of force, attacking mourners, beating with batons, using smoke grenades, shooting rubber bullets, scaring the hospital patients is a serious violation of international standards and regulations,” the statement added.

“Police attacked the sanctity of the site and campus of the hospital and funeral without thinking twice, knowing that St. Joseph Hospital is under the auspices of the Vatican and is protected by the French government,” it added.

Footage from security cameras shared by the hospital on Monday showed more than a dozen police officers pouring into the hospital building with batons drawn and moving aggressively through the hallways. DailyExpertNews has reached out to Israeli police for a response to the allegations made by St. Joseph Hospital.

Israeli Public Security Minister Omer Bar-Lev told DailyExpertNews on Saturday that police “acted to ensure that the funeral procession for journalist Shireen Abu Akleh was conducted in an orderly manner, in consultation with her family and with a clear understanding of the sensitivity and complexity of the event.

He added that “in the course of the funeral, serious violent events occurred among the participants that worsened the situation on the ground.”

Israeli authorities have said they will investigate the incident, with the police tweeting: “The Israeli police support its police officers, but as a professional organization trying to learn and improve, it will also learn lessons from the incident.”

Abu Akleh, 51, was shot dead in Jenin on Wednesday. The Palestinian and Israeli authorities are investigating the murder separately. Al Jazeera has accused Israel of deliberately killing the veteran journalist.