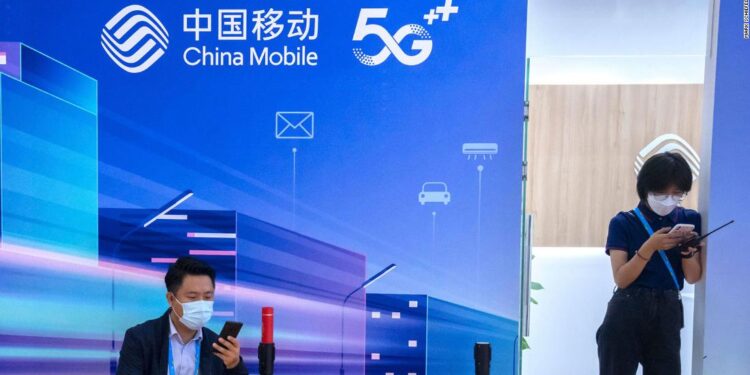 China Mobile said late Monday in a filing with the Hong Kong Stock Exchange, where it trades, that it had received approval from the China Securities Regulatory Commission to proceed with the share sale.

It is not yet clear how much money China Mobile will raise. It said in the filing that it is to hold “preliminary price talks” this week.

But the total — which the company plans to use to increase its 5G capabilities, among other things — could run into the billions of dollars.

In a statement on Tuesday, the company said it plans to issue 845.7 million shares. Based on the closing price of the stock in Hong Kong on Monday, that would bring the increase to 39.16 billion yuan ($5 billion).

China Mobile and two other state-run telecom companies – China Telecom and China Unicom – were forced to delist the New York Stock Exchange in January after the Trump administration banned US investment in companies with ties to the Chinese military. US President Joe Biden signed an executive order in June extending the ban.

China Telecom, the country’s second-largest telecom company, also trades in Hong Kong and made a listing in Shanghai in August. The $7.3 billion revenue was one of the world’s largest this year. Rival China Unicom already trades in Shanghai and Hong Kong.

Yang Jie, chairman of China Mobile, said in August that a listing in mainland China “would effectively promote the company’s development” and let its customers “share the benefits of the company’s growth and development.”

“Since our client market is basically in China, when we come back, the capital market and the client market will fully match,” he said in an earnings call at the time.

China Mobile is crucial to China’s high-tech ambitions to win the global race in 5G. The country aims to triple the number of 5G base stations it has by 2025 – an increase that would cover more than half of the population.

In its prospectus, the company said it would use about half of the money it plans to raise in Shanghai for 5G plans. The goal is to build at least 500,000 5G base stations by 2022.

Chinese telecom companies have already built more than 1 million 5G base stations across the country, according to figures released by China’s Ministry of Industry and Information Technology in September.

Tensions between the US and China have complicated China’s high-tech ambitions in recent years, with Washington imposing restrictions on the export of US technologies to Chinese companies, such as Huawei and SMIC.
Tags: ChinaDailyExpertNewsevictedGreenlightlistmobileShanghaiYork