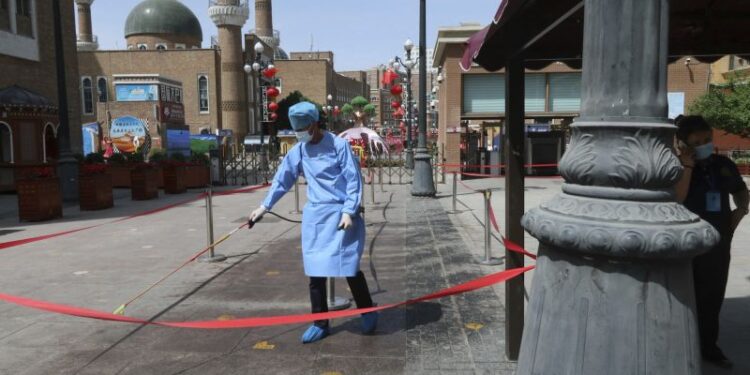 
Chinese authorities said on Saturday they would ease a months-long Covid lockdown in the country’s far western region of Xinjiang “in stages”, following protests over a deadly fire at an apartment building in the regional capital of Urumqi.

At least 10 people were killed and nine injured when the fire broke out on Thursday, according to the local fire service. and reaching victims.

A video that circulated widely on Chinese social media Friday night shows a large group of people marching to a government building in Urumqi chanting “end lockdowns,” while another shows some residents breaking through lockdown barriers and arguing with officials.

The city, with a population of nearly 4 million people, has been under strict lockdown since August, but despite the measures, daily Covid infections continue to hover around 100.

At a press conference on Saturday, local government officials promised they would lift lockdown measures “in phases”, allowing residents of “low-risk” buildings to evacuate their buildings.

Sui Rong, Urumqi’s propaganda chief, claimed that the city had “basically eliminated Covid cases in society” because of the lockdown measures.

But she did not acknowledge that there had been protests, nor did she give a clear timetable for easing measures or specify how many residents would be able to leave their homes or buildings after the announcement.

There has been a growing tide of disagreement across China in recent weeks over the government’s unrelenting zero-Covid lockdowns, which officials say are necessary to protect people’s lives from the virus.

In the central city of Zhengzhou, workers at the world’s largest iPhone assembly plant clashed with security guards in safety gear this week over a delay in bonus payments and chaotic Covid rules.

And on Thursday, in the sprawling southwest metropolis of Chongqing, a resident gave a scorching speech criticism of the Covid lockdown in his residential complex. “Without freedom I would rather die!” he shouted to a cheering crowd, who called him a “hero” and wrestled him from the clutches of several police officers who had tried to take him away.

Meanwhile, hopes that Beijing is signaling a slight easing of its approach — following minor relaxations in some quarantine requirements — are beginning to fade amid an uptick in cases as China enters the fourth winter of the pandemic.

This week, the number of Covid cases in the country hit record highs, according to the National Health Commission.