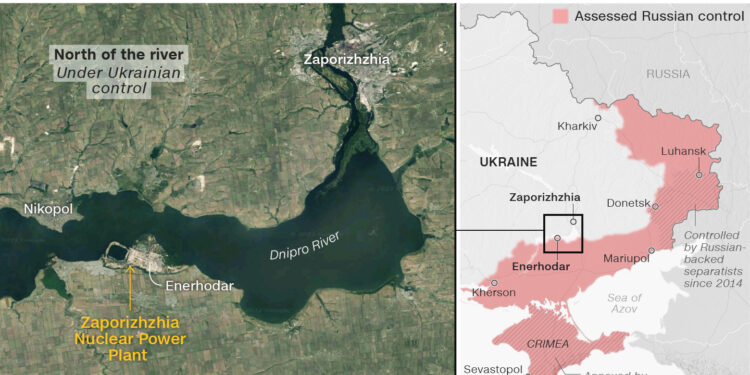 Ukrainian officials and Western analysts say Russian forces in the occupied Kherson region of southern Ukraine are finding it increasingly difficult to maintain the flow of ammunition, armor and fuel to frontline units thanks to a coordinated Ukrainian campaign to shut down rivers and rail supply lines and target ammunition depots. .

The Russians are moving command posts from the north of the Dnipro River to the south bank as bridges are badly damaged, Ukrainian officials say.

The first deputy head of the Kherson Regional Council, Yuri Sobolevsky, claimed on his Telegram channel that a significant part of the Russian military command had already left the city of Kherson. Ukrainian troops are located about 25 kilometers (15.5 miles) north of the city, towards Mykolaiv.

Much of the Kherson region has been occupied since the beginning of the Russian invasion of Ukraine. As part of Kiev’s counter-offensive to recapture lost territory in the south, Ukrainian forces are targeting critical bridges to disrupt supply routes in and around Kherson.

The Institute for the Study of War, a US-based think tank, said on Sunday that the Russians may be moving to the other side of the river “to avoid being trapped in the city of Kherson if Ukrainian strikes cut all lines of communication that connect the right bank of the Dnipro River on the Russian rear.”

In recent days, videos have surfaced on social media showing renewed artillery strikes on the Antonivskyi Bridge and a road bridge over the dam at Nova Kakhovka, making them impassable for heavily armored vehicles. In some areas, the river is up to 1 kilometer wide, making pontoon bridges impractical.

The Ukrainians have also targeted several railway lines from the Russian-occupied Crimean peninsula to the Kherson and Zaporizhzhya regions. On Tuesday, a series of violent explosions shook the town of Dzankhoy on the main line towards Kherson. Recent video showed a significant stock of military vehicles and ammunition at the site.

Two railway lines from Crimea have been affected in the past 10 days. Last week, local residents reported several hours of explosions in the Henichesk district, a port area along the Sea of ​​Azov, and the railway further west at Brylivka was also hit.

“In the past week, we have destroyed more than 10 ammunition warehouses and clusters of military equipment. These hits prevent the transfer of heavy equipment through these bridges,” said the Operational Command South of the Ukrainian Army.

None of this points to an imminent Russian withdrawal from Kherson.