Coach dives into pool to save American swimmer at World Cup 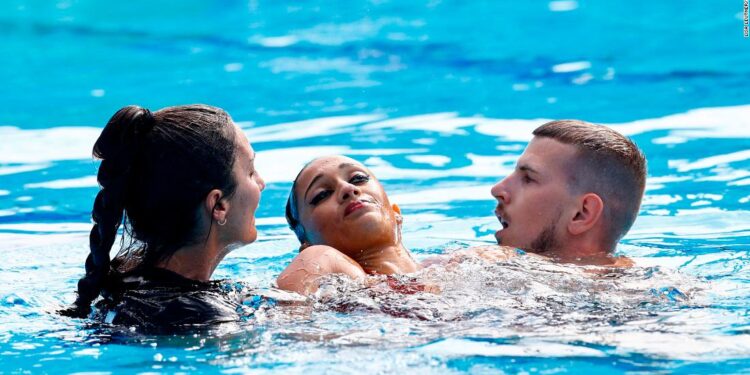 Coach Andrea Fuentes jumped into the pool after watching the 25-year-old artistic swimmer sink to the bottom at the end of her routine in the women’s solo free event.

Fuentes, a four-time Olympic medalist in synchronized swimming, lifted Alvarez to the surface before helping her to the edge of the pool.

Alvarez received medical attention next to the pool, Reuters reported, and was then taken away on a stretcher.

It was the second time Fuentes had to save Alvarez, according to Reuters, after she jumped into the pool during an Olympic qualifying event last year and pulled her to safety along with American swimming partner Lindi Schroeder.

Fuentes told Spanish broadcaster Cadena COPE in a radio interview: “I don’t think I’ve ever swum that fast, not even when I got Olympic medals and eventually I was able to get her up and she was ‘I wasn’t breathing. lifeguard.’
In a statement posted to the Instagram page of Artistic Swimming in the US, Fuentes said Alvarez would rest Thursday and see her doctor to see if she would be fit to compete in the swim-free team’s final, which according to the website. will take place on Friday. of the sport’s governing body, FINA.
“Anita is fine – the doctors have checked all vital signs and everything is normal: heart rate, oxygen, sugar levels, blood pressure, etc … everything is fine,” Fuentes said in the statement.

“We sometimes forget that this happens in other endurance sports. Marathon, cycling, cross country … we’ve all seen images where some athletes don’t make it to the finish and others help them get there,” Fuentes added.

“Our sport is no different from others. Only in a swimming pool do we look for limits and sometimes we find them. Anita is feeling well now and the doctors also say she is fine.”