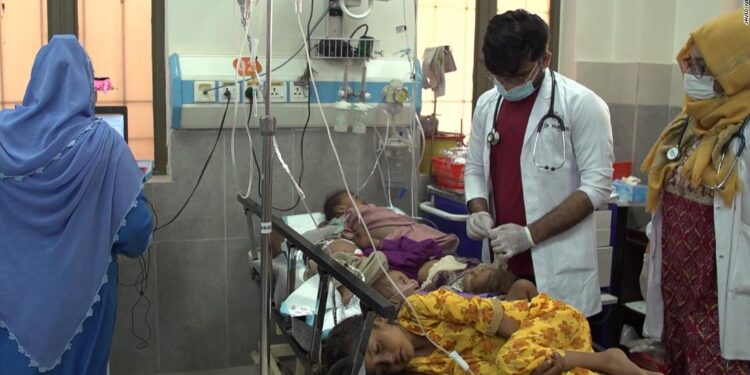 An hour later, another child succumbs to her illness. Her crying grandmother watches desperately as doctors wrap her in white too.

The children died of cholera, an acute diarrheal illness contracted from drinking water contaminated with bacteria.

And they weren’t the only ones.

More than 10 children die every day at the mother and child hospital in Pakistan’s Sindh province, all of them from water-related ailments as a result of this summer’s devastating floods that flooded a third of the country.

Dozens of children still sleep cramped together on beds in the emergency room of the institution; some unconscious from their illness, others weeping in pain. Pale and lethargic, their protruding ribs and bulging eyes are all symptoms of malnutrition.

Exhausted parents wait in deafening silence in the next room. Stunned and defeated, they don’t know if their child will leave the hospital alive.

“The floods came and the rains fell. And then our patients came in like the floods,” said Dr. Nazia Urooj, the doctor on duty in the hospital’s pediatric ward.

This is the face of an almost unprecedented health crisis unfolding across Pakistan, yet for many no help is coming. And aid agencies warn that the situation will only get worse if the international community does not act now.

The disaster is just beginning

Floods caused by record monsoon rains and melting glaciers in Pakistan’s northern mountainous regions have so far claimed the lives of nearly 1,600 people — more than a third who are children — and affected an estimated 33 million more.

The force of the floodwaters washed away homes, leaving tens of thousands stranded on the roads without food or clean water to drink.

In Sindh, one of the worst affected provinces, villages have been completely shut down, making it almost impossible for families to seek help for their sick children.

“Many children don’t even reach the hospitals because the medical facilities they can reach are underwater or simply inaccessible,” said Aadarsh ​​Leghari, UNICEF communications officer in Pakistan.

On the outskirts of Qazi Ahmed, a town in Sindh, a mother transports her young child on a rickety boat that transports stranded residents to health facilities.

A mother tries to cool her sick daughter’s forehead with a cloth soaked in dirty flood water. Credit: Javed Iqbal/DailyExpertNews

“She has a high fever and passed out,” the mother said, desperately trying to cool her daughter’s forehead with a cloth soaked in the dirty floodwaters that made her sick.

The boats are full of families seeking help. In the distance, parents wade to their waists with their children and belongings, trying to cross the flooded road.

Elsewhere, a young pregnant mother of five tries to calm her children as they wail from hunger. Flies swarm around their faces as they scream for her attention.

Severely anemic, she makes a desperate plea for help.

“There’s no blood in my body. I need two bottles of blood,’ she said, before picking up one of her children and patting her to sleep. ‘I don’t think well. I have a fever. I need blood.’

An ‘abundance of’ disease

As the floodwaters slowly recede, another disaster is looming as tens of thousands struggle with diseases such as diarrhea, dysentery, dengue fever and malaria.

And it is the poorest in the country who are most vulnerable. Rani, a mother who took her sick three-year-old son Abbas to Mother and Child Healthcare Hospital, said their village was surrounded by flooding and their house was completely destroyed, forcing them to live under a plastic sheet on the road.

During the day, Rani and her family deal with scorching temperatures and dehydration. And at night the mosquitoes attack, she said.

“We burn waste so that mosquitoes (the kids) can’t bite,” Rani said. “We stay active at night so our kids can sleep.”

Sindh has seen an acute outbreak of dengue fever – a viral infection transmitted by the Aedes mosquito, the same insect responsible for the spread of Zika, chikungunya and yellow fever.

It causes flu-like symptoms, including stabbing headaches, muscle and joint pain, fever and rash, although only 25% of those infected show symptoms. Extreme cases can cause bleeding, shock, organ failure, and possibly death.

Rani’s son is being cared for in the emergency room of the hospital. Credit: Javed Iqbal/DailyExpertNews

UNICEF’s Leghari said mosquitoes in the province were a concern.

“There are no mosquito nets. It’s the mosquitoes that bring in malaria and disease,” he said. “The other is cholera… it’s like there’s a plethora of disease coming out of these flood lakes. This is going to be a bigger health crisis.”

In a statement last week, the United Nations called the situation “alarming”.

“Millions of children are still struggling to survive, and we fear thousands will not make it,” the statement said.

In the hospital waiting room, Mai Sabagi, the grandmother of a five-year-old girl who had just died of cholera, said her family did not have the 1,000 Pakistani rupees ($4) needed to remove her body.

Her seven-year-old grandson died in another hospital. Two more of her grandchildren are also sick.

“All this happened because of the rain,” she said. ‘We’ve lost our clothes… everything. Our house is damaged. We got no help. Poor people can’t afford treatment.’