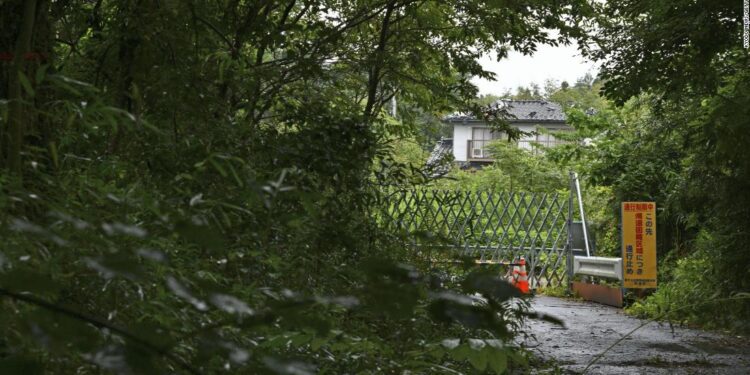 The city of Futaba, formerly off limits, is the latest of 11 counties to lift the evacuation order, a city office spokesman told DailyExpertNews.

On March 11, 2011, an earthquake measuring 9.0 on the Richter scale struck the east coast of Japan, triggering a tsunami that caused a meltdown at the power plant and a large release of radioactive material. It was the world’s worst nuclear disaster since Chernobyl in 1986.

Futaba is home to the Tokyo Electric Power Company (TEPCO) complex and a train station. Public facilities, such as the newly reopened city office, will reopen next Monday.

Photos from the city show empty shops, houses and temples, many of which have suffered external damage such as collapsed roofs and broken windows. The streets are mostly empty. Abandoned cars and trucks stand in a field, covered in dirt and rust.

Before the nuclear disaster, Futaba had about 7,100 inhabitants. At the end of July, more than 5,500 people are still registered as residents, according to the municipal spokesperson.

Residents have been allowed to enter the northeastern part of Futaba – but do not live there – since March 2020, when experts said radiation levels did not exceed 20 millisieverts per year. That level is equivalent to two full-body CT scans, and international safety watchdogs recommend that it be the limit of a person’s annual exposure to radiation.

Authorities began preparing for the city’s reopening this year; in January they launched a program allowing former residents to return temporarily, but only 85 people from 52 households participated, the Futaba official said. Photos from March also show workers tearing down collapsed structures and preparing to rebuild them.

However, it remains unclear how many people will return – and how long it will take the city to recover.

More than 80% of the municipality has been designated a “hard to return” zone that still experiences a lot of radiation, the spokesman said. And a survey from last August found that 60.5% of residents had decided not to return – far more than the 11.3% who wanted to return.

Futaba has no official timeline on when other areas of the city will be fully decontaminated.

But the spokesman expressed hope for the city’s future and said Futaba aims to grow its population to 2,000 by 2030.

“The evacuation order has now been lifted, but we cannot give a concrete number on how many people will return,” the spokesperson said. “Obviously we want people to come back and support their ability to do this to the best of their ability.”

If other Japanese cities hit by the 2011 nuclear disaster are any indication, Futaba has a long way to go. Even places where evacuation orders were lifted several years ago still faced challenges.

For example, the village of Katsurao, which is about 40 kilometers from the factory, reopened to residents in 2016, but some households are still waiting for their parts of the village to be cleaned up.

Others may still be concerned about radiation. Despite the decontamination efforts, a 2020 survey by Kwansei Gakuin University found that 65% of evacuees no longer wanted to return to Fukushima prefecture – 46% feared residual contamination and 45% had settled elsewhere.