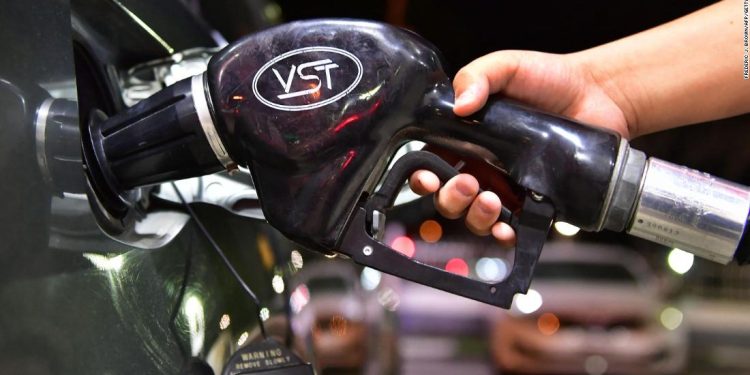 The national average price for a gallon of regular gas was $3.92 a gallon Saturday, according to AAA. That is the highest price since April 2012.

ADVERTISEMENT
Gas prices have risen 26 cents since Wednesday and 39 cents, or 11%, since February 23, the day before the Russian invasion of Ukraine. Each of those increases marks the biggest price hikes since Hurricane Katrina ravaged the U.S. Gulf Coast in 2005, devastating the country’s oil and gas industry.

“This isn’t the end just yet,” said Tom Kloza, global head of energy analysis for OPIS, which collects data from 140,000 gas stations across the country for AAA’s price averages. Wholesale gasoline prices rose another 23 cents in trading Friday. Kloza said the wholesale gas price increases will likely be passed on to consumers in the near term.

“It has definitely gotten out of hand,” he said.

The average price a year ago was $2.75 per gallon as prices were still recovering from the plunge that occurred early in the pandemic. Home orders and business closures have reduced the demand for gasoline.

Prices have risen because Russia is one of the world’s largest oil exporters, with most of its oil going to Europe and Asia. According to Energy Ministry data, Russian oil made up just 2% of US oil imports in December.

But oil is priced in global commodity markets, so Russia’s impact on global markets is felt everywhere.

The sanctions imposed on the Russian economy after the invasion of Ukraine have so far exempted Russian oil exports. But traders have been hesitant to buy Russian oil due to uncertainty about closing the transaction with the Russian banking sector limits, as well as concerns about finding oil tankers willing to call at Russian ports to load the purchased oil.
Calls have been made for the United States to ban Russian oil imports. But that would likely have limited impact on global or U.S. prices, given that so little is shipped to the United States, Kloza said.

“It’s not mission critical. Canada, Mexico, Saudi Arabia — those are the big boys” in terms of US oil imports, Kloza said. “Russia is a bit of a player.”

Kloza said that even without a ban on US imports of Russian oil, he could see the average price rise to a new all-time high of between $4.25 and $4.50 a gallon. He said the rapid rise in the price of gas makes a particularly strong impression on the public, compared to a slow but steady rise in price.

“When you soar so quickly and so dramatically, you really sear the audience,” he said.

The California statewide average rose 13 cents to $5.07 a gallon on Friday, making it the first state ever to have an average price of more than $5 a gallon. The median price rose another 11 cents to $5.18 on Saturday.

There are now 11 states — California, Hawaii, Nevada, Oregon, Washington, Alaska, Illinois, New York and Pennsylvania, Connecticut and Arizona, as well as Washington, DC — where the average price was already more than $4 a gallon, with Connecticut, Arizona and Washington, DC, cross the $4 mark with the latest reading.

Six more states — New Jersey, Massachusetts, Rhode Island, Vermont, Maryland, and Delaware — are within a penny of that $4 average.

The average price of a gallon of diesel is now $4.41 a gallon, up 15 cents since Friday. Last weekend it came in at $4. Although relatively few American passenger cars use diesel, virtually all large trucks rely on it. And most trucking companies have a schedule of fuel surcharges that are based on average prices, meaning the cost of transporting nearly all goods for businesses is increasing, a cost increase that is likely to be passed on to consumers in the form of higher prices as well.
ADVERTISEMENT
Tags: BiggestcontinueDailyExpertNewsgasHurricanejumpKatrinapricesrise