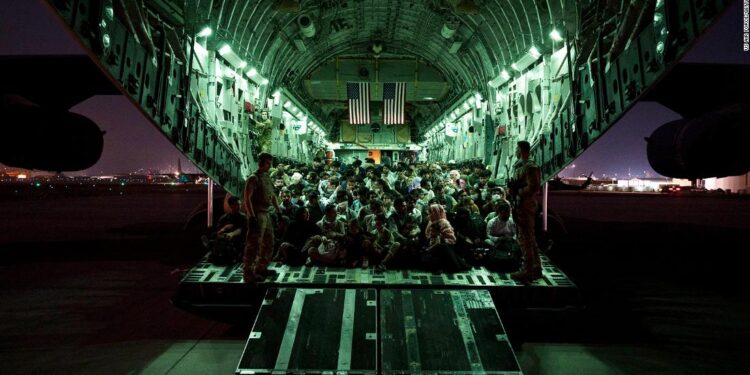 This figure — meaning there was “about one consular officer for every 3,444 evacuees” — is one of many previously undisclosed details set forth in the highly critical report examining the chaotic US withdrawal last August.

ADVERTISEMENT
ADVERTISEMENT
Republicans’ report from the House Foreign Affairs Committee, released exactly one year after the country’s capital fell to the Taliban, reveals additional new details about the Biden administration’s failure to adequately plan and execute the US withdrawal from Afghanistan. The report also says the government has failed to accurately portray the nature of events on the ground and failed to formulate a plan to prevent US-trained Afghan commandos from being recruited by US adversaries.

“Many of the Biden administration’s evacuation plans were implemented in the spring of 2021 — some even before the president announced the withdrawal. And they were never updated despite the Taliban’s gains on the battlefield, despite the deteriorating security situation and despite the revised intelligence assessments,” said Rep. Michael McCaul, the top Republican on the House Foreign Affairs Committee.

President Joe Biden announced in mid-April 2021 that the US would withdraw all remaining troops from Afghanistan by September 11 of that year — the 20th anniversary of the terrorist attacks that unleashed the US war there. While Biden has long wanted to end US involvement in the war in Afghanistan, he attributed the decision in part to the Trump administration’s deal with the Taliban, which had pledged to withdraw by May 1, 2021. .

In the weeks and months that followed, bipartisan lawmakers urged the government to ensure plans were in place to protect Afghans who worked for the US during the nearly two-decade conflict, including evacuation options.

The House report found that the U.S. embassy in Kabul did not hold an Operational Planning Team (OPT) meeting with members of the U.S. military and U.S. diplomats until mid-June 2021, focusing on pre-planning for non-combatant evacuation operations ( NEO). The meeting was described by an involved US military officer as “the first time” that the embassy “started looking at the possibility of NEO”.

Due to the “complete lack of proper planning by the Biden administration,” there were repercussions: Evacuation flights “increased at only about 50% of their capacity” for five days in the NEO, the report said. The report points to slow processing at the gates and chaos outside the gates — a government evacuation process so chaotic and disorderly that even staffers of Vice President Kamala Harris and First Lady Jill Biden reached out to outside groups to try and get people out. to get it, representatives of the groups told the committee.

The report found that those who were able to board those evacuation flights were predominantly male, despite concerns – now confirmed – about women being deprived of their freedoms when the Taliban took over.

“We now know through data from the Departments of State and Homeland Security that only about 25 percent of those evacuated during the NEO in Afghanistan were women or girls. To put this figure in context, historically, women and girls represent more than half of the emergency refugee flows,” Ambassador Kelley Currie, the general ambassador for the State Department’s Office of Global Women’s Issues under the Trump administration, wrote in the report.

When Kabul fell and then Afghan President Ashraf Ghani fled the country, two top US officials — General Kenneth “Frank” McKenzie, then head of the US Central Command, and Zalmay Khalilzad, then Special Representative for Afghanistan who signed the deal between the US and the Taliban under Trump — met with Taliban officials in Doha, where the militant group offered the US control of the capital’s security.

Testifying that he turned down the offer, McKenzie told Congress in September 2021, “That wasn’t why I was there, that wasn’t my instruction, and we didn’t have the resources to carry out that mission.”

However, Khalilzad told the commission that he thought “we could have considered it,” the report said. The former official also said the US has not ordered the Taliban to stay out of Kabul.

“We didn’t say, ‘Don’t go.’ We advised them to be careful,” Khalilzad said, according to the report. Meanwhile, US officials had repeatedly said the US supported peace talks between the Taliban and the Ghanaian government.

Those attempting to flee the city were then forced to fight the Taliban threat as they attempted to reach the airport, where thousands gathered outside the gates in a desperate attempt to get in and onto a flight. And in the early days of the evacuation, the operation at the airport went so badly that groups of Afghans reached the runway and desperately tried to hold on to departing planes.

“Given that the government ceded control of Kabul to the Taliban, it was a very tactically challenging situation. But it was decisions they made – or in some cases avoided – that led to that tactical challenge,” McCaul said.

As that chaos unfolded, the report states that the government has “repeatedly misled the American public” by trying to downplay the grim situation on the ground and instead paint a picture of competence and progress.

The report juxtaposes comments from State Department officials with internal memos, such as one dated Aug. 20 stating that at least seven Afghans “died while waiting outside the gates of HKIA (Hamid Karzai International Airport in Kabul)” and that the Taliban “refused to accept the remains” of the corpses stored at the airport.

“At one point, State Department spokesman Ned Price encouraged people to go to the airport and told the press that the evacuation was ‘efficient and effective’, but the airport gates were closed and internal memos talked about how there seems to be too many at the airport and they don’t know how to deal with all of them,” McCaul said.

The committee requested transcribed interviews with more than 30 government officials, but the Biden administration declined to participate. For the report, the committee relied on interviews and information from whistleblowers, conversations with people who were in Kabul during the withdrawal and investigative trips to the region.

The Republicans leading this investigation are in the minority, meaning they have no subpoena power, but they have indicated that they will issue subpoenas and continue investigating the withdrawal if their party takes over the House in this year’s election. They call this an interim report.

The report also says the government has failed – even months after the withdrawal – to take measures that would prevent US-trained Afghan commandos from being recruited by US adversaries such as Iran, China or Russia.

“The US government has evacuated about 600 Afghan security forces who aided the evacuation by providing perimeter security and other functions, but these represent a very small fraction of the US trained units that fought alongside US forces. And even those who were lucky enough to being flown out are stranded in third countries,” the report says, adding that 3,000 Afghan security forces have fled into Iran according to a SIGAR report earlier this year.

In July, the Biden administration still had no plan to prioritize the evacuation of these Afghans from the region, while the State Department awaited a policy decision from the NSC, the report said.