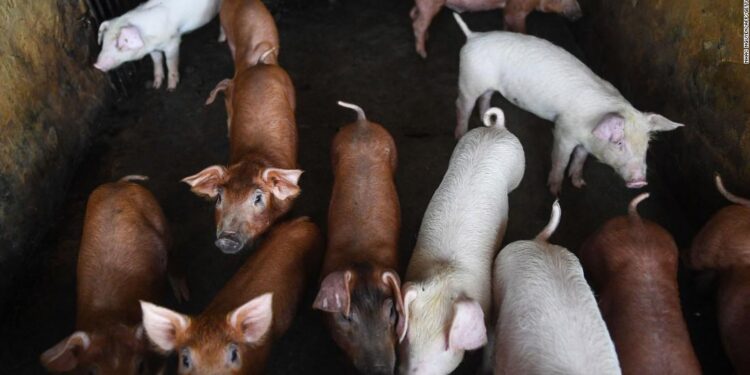 All over the world there are so-called blue zones where people live exceptionally long and healthy lives. Scientists study these ‘lands of the immortals’ to discover the secrets of longevity.

We may not have discovered the healing waters of the Fountain of Youth yet, but one of the breakthroughs in this week’s newsletter is shaking up what we know about life and death.

Groundbreaking research in pigs shows that death in cells does not occur instantaneously.

In fact, it’s a complex biological process – a bit like a waterfall of dominoes – that can potentially be stopped.

Scientists at Yale University resuscitated the cells and organs of pigs that had been dead for an hour using a synthetic blood treatment.

The results astonished the researchers involved in the project. Check out the pig cells, shown right in the side-by-side comparison above, revived by the OrganEx System, a new technology they’ve developed.

However, the goal isn’t to magically bring animals back to life — it’s to expand the window for much-needed human organ transplants.

The massive eruption of a submarine volcano near Tonga in January defied any simple explanation and surprised scientists who continue to learn it.

It caused an unexpected kind of tsunami, a sonic boom that was heard as far as Alaska, hurricane-force winds in space and unusual pressure waves.

Now, thanks to detections from a NASA satellite, we know that the volcano has blown such a huge amount of water vapor high into the atmosphere that it will likely temporarily warm the Earth’s surface.

The vapor plume that the eruption sent into the stratosphere — which is between 8 and 33 miles (12 and 53 kilometers) above the Earth’s surface — included enough water to fill 58,000 Olympic-size swimming pools.

The NASA’s Artemis mission isn’t just about returning to the moon — it’s part of preparations for a bolder plan to go to Mars.

How astronauts will make the years-long journey to the red planet is uncertain. One idea is to hibernate the space travelers, and a small mouse-like creature living in the Patagonian forest could hold a key to unlocking this approach.

As soon as the weather turns cold, the monito del monte builds a mossy nest in a hollow tree. There the little marsupial enters a physiological state called stupor, and the heart rate drops from 200 beats per minute to two or three beats per minute. During this inactive period, the animal conserves energy by breathing once every three minutes.

Walking on Bennu, a near-Earth asteroid, would be a bit like wading through a ball pit, NASA scientists have found.

Images and data from the agency’s OSIRIS-REx mission revealed that the asteroid’s exterior is made of loosely packed particles that are not tightly bound together.

The OSIRIS-REx spacecraft, which successfully collected a sample of the asteroid in 2020, encountered little resistance when it landed — about as much as someone might feel to push the plunger of a French press coffee maker.

Had the spacecraft not fired its thruster to back up after the rapid collection of dust and rocks, it might have sunk straight into the asteroid. It’s just the latest unexpected discovery about Bennu as OSIRIS-REx and the precious monster make their way to Earth.

Priceless coins and jewels that once belonged to seafaring knights are among the treasures recently discovered on a Spanish shipwreck.

The Nuestra Señora de las Maravillas (or Our Lady of Miracles) sank in 1656 after it collided with another boat from his fleet and crashed into a coral reef off the Bahamas.

The 891-ton ship carried a huge treasure, part of which was set aside as a royal tax for King Philip IV, from Cuba to Seville, Spain.

The cache was more important than usual, as the Maravillas had also been carrying treasure retrieved from a ship that sank two years earlier.

Escape to worlds beyond your own with these stories:

— A paleontologist found an extremely cool fossil in his backyard. It turns what we know about the first Americans upside down.
— Caves were home to Earth’s earliest human inhabitants. Similar formations on the moon could provide pioneering astronauts with a safe haven on the moon.
— The James Webb Space Telescope has captured a stunning image of a strange, cartwheel-shaped galaxy.

Like what you have read? But there’s more. Register here to get the next edition of Wonder Theory delivered to your inbox, brought to you by DailyExpertNews Space and Science writers Ashley Strickland and Katie Huntwho find wonders in planets beyond our solar system and discoveries of antiquity.