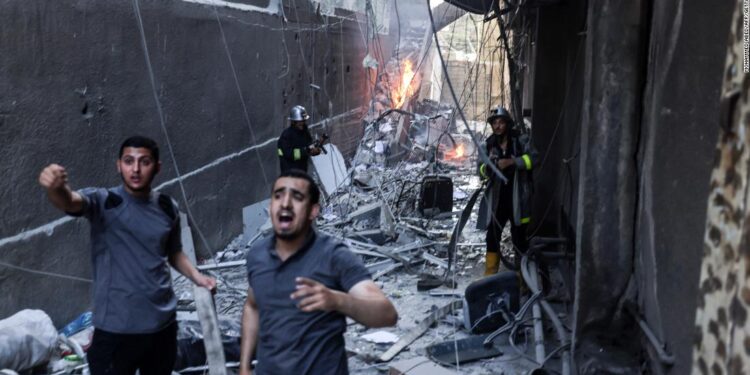 Islamic Jihad said in a statement that one of its senior leaders, Tayseer Al Jabari, had been killed in an Israeli attack. He was commander of the Quds Brigade, the armed wing of Islamic Jihad, the group said, and a member of the Military Council.

The Palestinian health ministry said at least 10 people were killed, including a 5-year-old girl and a 23-year-old woman. Another 75 were injured, it said. Israel maintains that most of the dead were militants.

A DailyExpertNews producer in Gaza saw medics carrying two bodies from a building, the Palestine Tower, that had been hit in one of the attacks.

According to an Israeli military statement, the military operation — which it dubbed “Breaking Dawn” — targeted Islamic Jihad, the smaller of Gaza’s two main militant groups.

The Israeli military said the main focus of its military action was a preemptive airstrike on Al Jabari, and attacks on two anti-tank squadrons that were on their way to launch an attack on Israeli forces.

Speaking to reporters Friday night, an army spokesman said the two squadrons had been monitored for several days before the air force conducted its operation, adding that Israel had been facing an imminent threat for several days as the two militant units moved very close to each other. the fence separating Gaza from Israel.

A “special situation” has been declared in areas around Gaza, pending possible rocket fire or other retaliatory attacks, the Israeli military said.

“The aim of this operation is to eliminate a concrete threat against the citizens of Israel and the civilians living next to the Gaza Strip, as well as attacking terrorists and their sponsors,” Israeli Prime Minister Yair Lapid and Defense Minister Benny Gantz said. said in a joint statement.

“The Israeli government will not allow terrorist organizations in the Gaza Strip to set the agenda in the area bordering the Gaza Strip and threaten the citizens of the State of Israel. Anyone trying to harm Israel should know: We will find you .” said Lapid.

Islamic Jihad has vowed to respond. “All options are open, by any means the Palestinian resistance has, whether in Gaza or beyond,” Al Jazeera spokesman Daoud Shehab said. “The battlefield is open … The resistance will react with all its strength. We will not say how, but it is inevitable.”

The immediately called-up units will bolster the army’s southern command, which includes the area around Gaza, as well as units serving Israel’s air defense systems, among other things, the defense ministry said.

Sirens indicating incoming rocket fire were heard late Friday night in the southern city of Sderot and other villages near Gaza. Sirens have previously sounded in Bat Yam, just a few miles south of Tel Aviv, and in Yavne, which lies between Tel Aviv and Ashdod. Israeli media reported that many missiles have been intercepted by the Iron Dome air defense system, with no reports of casualties in Israel.

According to an Israeli army official, Palestinian militants had fired 118 rockets at Israel by midnight local time from Friday to Saturday (5 p.m. ET Friday).

Eleven of the launches had failed to cross the fence separating Gaza from Israel, the military said, meaning they had landed somewhere in the Strip.

The rest were intercepted or landed in open areas, the military official said.

The Israeli military said it continues to attack Islamic Jihad targets in Gaza, including a rocket launch site near the southern Gaza city of Khan Younis. The military also said it was attacking weapons production facilities.

Hamas, the militant group that controls Gaza, appears to be proceeding cautiously amid a serious escalation between Israel and Islamic Jihad, the smaller of the two main militant factions in the Strip.

Hamas leader Ismail Haniyeh has blamed Israel for the escalation, but his most recent statements have stopped threatening attacks or warning of retaliation. Instead, they have emphasized the role of international mediators and Hamas’ involvement in talks aimed at ending hostilities.

“The Israeli occupation bears full responsibility for the latest escalation in the Gaza Strip,” a Hamas statement quoted Haniyeh on Saturday morning. “In a telephone conversation with senior Egyptian intelligence officials, Haniyeh reaffirmed the need to immediately stop the ongoing Israeli bombardment in the besieged Gaza Strip,” the statement continued.

A previous Hamas release reported that Haniyeh had also telephoned the Qatari foreign minister in an attempt to stem the violence.

When militants from Israel and Gaza waged a brief war in May 2021 — the fourth such war in 13 years — Hamas was clearly in charge. It attempted to use increasing violence in and around Jerusalem’s Aqsa Mosque as a pretext for launching rockets into Jerusalem, sparking the 11-day conflict.

Tor Wennesland, the UN’s top official in the Middle East, said he was deeply concerned about the ongoing escalation between the two sides.

Referring to the murder of a five-year-old girl, Wennesland said there is “no justification for attacks on civilians”, and told militants that “missile launches must cease immediately, and I call on all parties to further escalate.”

The UN, along with Egypt, has often played an important intermediary role between Israel and Palestinian militants in restoring a ceasefire after hostilities broke out.

Wennesland said the UN was “fully engaged with all concerned” to try to prevent further deterioration. But he added: “The responsibility lies with the parties to prevent this.”

During the operation, according to the Israeli army, a 17-year-old Palestinian with links to Islamic Jihad was shot dead in a firefight with Israeli soldiers. The Palestinian health ministry said he was shot in the head by Israeli troops.

Saadi was one of two wanted terror suspects apprehended in the raid, Israel said. The Quds Brigade, the armed wing of Islamic Jihad, said it would mobilize its troops across the Palestinian territories in response.

In recent months, there have been repeated Israeli operations in and around Jenin, after several deadly attacks were carried out in Israel by Palestinian gunmen from the region. According to the Palestinian health ministry, 30 Palestinians have been killed in the raids since the beginning of this year.

Neri Zilber in Jerusalem contributed to this report.