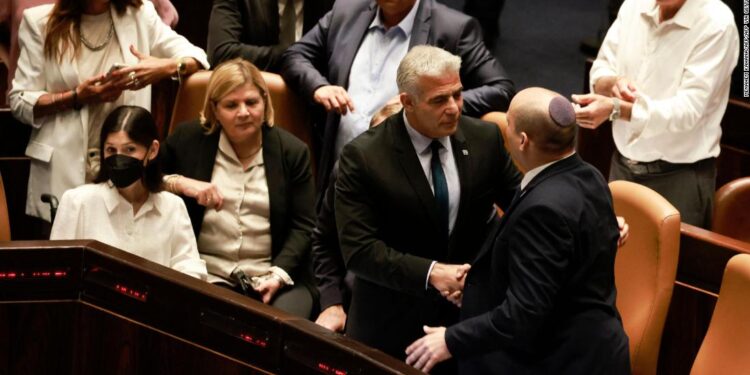 On Friday, Foreign Minister Yair Lapid will officially take over as interim Prime Minister under a coalition agreement signed last year between outgoing Prime Minister Naftali Bennett and Lapid. Since Lapid, a former journalist and star TV presenter, is the current Prime Minister, there will be no formal swearing in.

When the vote was over, Lapid and Bennett put their arms around each other, hugged, and switched seats so that Lapid was in the Prime Minister’s position.

As they were leaving the Knesset floor, Bennett accidentally took Lapid’s cellphone with him. “My brother,” Lapid said, “you took my phone.” Bennett replied, “My brother, you took my job.”

New elections will be held on November 1 – the fifth round of voting for Israelis in less than four years. Recent polls show former Prime Minister Netanyahu’s Likud party is on track to win the most seats, but the polls fail to show that his right-wing bloc will necessarily have enough seats to gain a parliamentary majority and a governing body. to form a government.

Netanyahu spoke on the parliament floor before the dissolution vote and pledged to return to power.

“We are the only alternative: a strong national government, stable and accountable. A government that will return national honor to the citizens of Israel,” Netanyahu said.

The night before the dissolution, Bennett announced that he would be retiring from politics and not running for re-election.

“I will remain a faithful soldier of this country, which I have served all my life as a soldier, officer, minister and prime minister. The State of Israel is the love of my life. Serving her is my destiny,” Bennett said. in a speech to the nation. “This is my time to take a step back. Look at things from the outside.’

The coalition government had been reeling for weeks. But Bennett and Lapid’s announcement last week that they wanted to dissolve their own government and hand over power to Lapid came as a surprise.

“Over the past few weeks, we have done everything we can to save this government. In our view, continuing its existence was in the national interest,” Bennett said earlier this month, alongside Lapid.

“Believe me, we have looked under every rock. We have not done this for ourselves, but for our beautiful country, for you citizens of Israel,” Bennett added.

The Bennett-Lapid administration was sworn in last June, ending Netanyahu’s premiership that had lasted more than 12 years.

The coalition, made up of no fewer than eight political parties, spanned the entire political spectrum, including for the first time an Arab party, led by Mansour Abbas.

United in a desire to prevent Netanyahu — whose corruption trial had already begun in May 2020 — from remaining in power, the disparate coalition partners agreed to set aside their substantial differences.

While it had significant domestic and diplomatic successes, it was internal politics that ultimately toppled the coalition.

In recent weeks, a number of coalition members have seen or threatened to resign, leaving the government without a majority in parliament to pass legislation.

The political deadlock came to a head earlier this month when a vote in the Knesset failed to uphold the application of Israeli criminal and civil law to Israelis in the occupied West Bank.

The ordinance, which is renewed every five years, gives Israeli settlers in Palestinian territories the same legal treatment as within Israel’s borders, and is an article of faith for right-wing coalition members, including Prime Minister Bennett.

But two members of the coalition refused to support the bill, so it was not passed.

Because the parliament was dissolved before the law expired on July 1, the arrangement will remain in effect until a new government is formed, after which a new vote is taken.

Andrew Carey contributed to this report.