‘It belongs to everyone’: Australian government buys rights to Aboriginal flag for $14 million 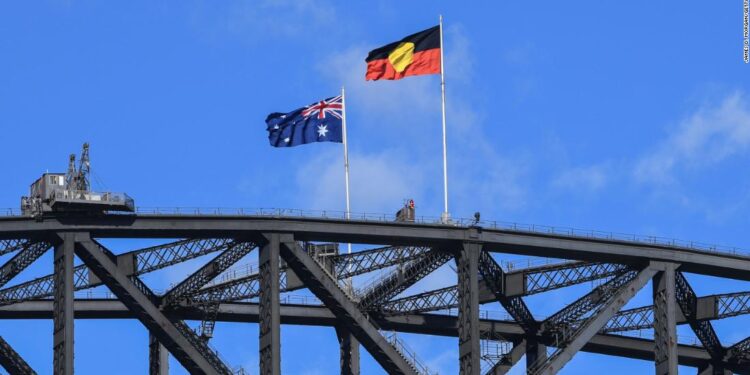 ADVERTISEMENT
The Australian government has bought the copyright to the Aboriginal flag, making it freely available for public use and ending a protracted battle over the design.

In a deal worth more than 20 million Australian dollars ($14 million), the government of Prime Minister Scott Morrison secured the rights of indigenous artist Harold Thomas, who created the flag more than 50 years ago.

The agreement means that the flag can now be reproduced without permission and for free on clothing, merchandise, sports shirts or artwork. In a statement, Morrison said the flag had been “liberated”, adding that his government had “tried to protect the integrity of the Aboriginal Flag, in accordance with the wishes of Harold Thomas”.

The red-black-yellow design has been recognized as an official flag of Australia since 1995. But it became the subject of a commercial dispute when a company that had licensed Thomas’s image began demanding payment from several organizations that use it, including a charity. , various clothing brands and the National Rugby League of Australia.

A 2020 parliamentary inquiry, which backed the government’s efforts to obtain the artist’s rights, described the licensee’s actions as “severe”, but “completely legal”.

A “Free the Flag” campaign, launched in 2019, called for an end to the exclusive licensing deals. It gained support from several high-profile Aboriginal Australians, including the former Olympian Nova Peris.

In a statement, Minister for Indigenous Australians, Ken Wyatt, described the flag as an “enduring symbol close to the hearts of Aborigines”, adding: “Now that the Commonwealth has copyright, it belongs to everyone, and no one can do it.” take it away.”

Designed by Thomas prior to a demonstration in Adelaide in 1971, the flag has since become an emblem for Aboriginal Australians and is often seen from government buildings. The yellow circle of the design represents the sun and the black stripe symbolizes the indigenous people, while the red part relates to both their blood and the earth.

In an op-ed published Monday in the Sydney Morning Herald, Thomas described the flag as a “very personal” work of art.

“When I made the flag, I made it as a symbol of unity and pride,” he wrote. “That pride we have for our identity that harks back to the birth of our dreams, to the present existence and beyond. And we humble ourselves and pay tribute to all that was made and left behind for us.

Thomas also revealed that he had minted a digital copy of the flag as an NFT or non-replaceable token. He said he plans to keep the digital token “ongoing, on behalf of indigenous communities.”

The deal was welcomed by the opposition Labor party, with shadow minister for Indigenous Australians Linda Burney using a TV appearance on Sky News Australia to express her “tremendous sense of relief” that the flag had been “released”.
But others questioned the timing of the deal, which was announced the day before the country’s increasingly controversial national holiday, Australia Day. Indigenous artist Rachael Sarra wrote on Instagram, accusing Morrison of “twisting the story so come (January) 26 he can claim to be a hero.”

Lidia Thorpe, senator for the Australian state of Victoria, meanwhile, questioned whether the copyright of the flag should rest with the national government, rather than the Indigenous community. “This is a victory for grassroots people who have been fighting for our right to use our flag, but I’m afraid it won’t come into the control of the community,” she said. tweeted. “The Aboriginal flag belongs to the Aboriginal people.”

Morrison’s office said in a press release that Thomas will retain “his moral rights” to the design. And while the flag has been released for personal use, the textile printing company Carroll & Richardson Flagworld remains “the exclusive licensed manufacturer and supplier of Aboriginal flags and bunting.” Royalties from those sales will go to the National Aborigines and Islanders Day Observance Committee (NAIDOC), with the government also announcing a new 100,000 Australian dollar ($71,000) scholarship in Thomas’s honor.

In an email to DailyExpertNews, the National Indigenous Australians Agency confirmed that the multi-million dollar amount includes both the compensation paid to Thomas and “payments to the licensees for the termination of their licenses.”