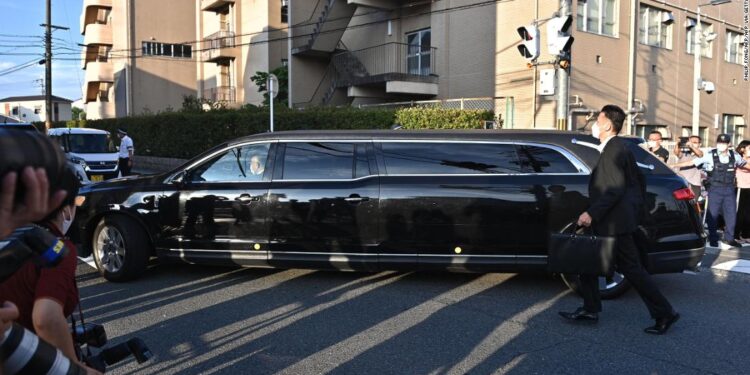 The funeral of the former prime minister will take place Monday and Tuesday, Abe’s office told DailyExpertNews, with a vigil on Monday, followed by a memorial service on Tuesday.

The funeral will be hosted by his widow at a temple in Tokyo, Japan’s public broadcaster NHK reported, adding that attendance would be limited to relatives and people close to Abe.

When Abe’s body arrived home, police continued to question the suspected gunman who had previously admitted to the murder and in whose home police found multiple types of homemade weapons mounted with iron pipes, authorities said.
That a former prime minister could be shot at close range while speaking in broad daylight in a country with one of the world’s lowest rates of gun-related crime has reverberated in Japan and the world. Presidents, prime ministers and other international leaders sent tributes to express their outrage and sadness at the assassination.

Abe, 67, was pronounced dead by doctors at Nara Medical University Hospital at 5:03 p.m. local time Friday, just over five hours after he was shot while giving a campaign speech to a small crowd in the street.

At the time of the shooting, Abe was speaking in support of the ruling Liberal Democratic Party (LDP) candidates ahead of Sunday’s senate elections, which are still scheduled. Despite his resignation as prime minister of Japan in 2020 on health grounds, Abe remained an influential figure in the country’s political landscape and continued to campaign for the LDP.

Abe arrived at the hospital in cardiac arrest and despite a team of medical personnel fighting to resuscitate him, the former prime minister died of excessive bleeding caused by gunshot wounds to his neck and heart, doctors said.

Hundreds of people gathered in the streets outside Abe’s Tokyo home on Saturday, hoping to glimpse the car containing his body. People of all ages told DailyExpertNews they were disbelief and saddened by Abe’s passing.

“I didn’t expect something like this to happen to someone who was Japan’s leader for so long — it’s usually so safe here and we don’t have a gun crime,” said Takashi Uchida, 57.

Student Ryogo Uto, 18, said Abe’s death was “so sudden” that it “still hasn’t sunk in”.

“Abe was a respected leader who did many things for Japan while in power,” he said.

Rows of tearful mourners also gathered to place flowers and kneel at a makeshift memorial outside Nara’s Yamato-Saidaiji Station, close to where Abe was killed.

Police have launched a murder investigation into the murder, but little is known about the suspect who was arrested Friday at the scene of the deadly shooting.

Tetsuya Yamagami, 41, has admitted to shooting Abe with a homemade gun, Nara Nishi police said at a news conference on Friday. Yamagami, who is unemployed, told investigators he harbors hatred of a particular group he believed Abe was involved with. Police have not named the group.

Footage of the scene showed what appeared to be a weapon with two cylindrical metal barrels wrapped in black tape. The weapon recovered in the shooting is 40 centimeters long and 20 centimeters wide, according to police.

Authorities later seized several similar handmade gun-like items from the suspect’s apartment. According to the police, the suspect made the weapons himself with parts purchased online.

While searching the residence, police found multiple types of weapons with iron pipes wrapped in adhesive tape, NHK reported — the weapons had three, five and six such pipes as barrels. Police say the suspect fired bullets into the pipes.

They believe the suspect used the strongest homemade weapon in the murder, NHK added.

Japan’s national police station said it will review security arrangements made before Friday’s shooting, NHK said. Security was provided by the Nara Prefectural Police, who prepared a security plan for the former prime minister while he was in the city.

The agency said several dozen officers and security personnel from the Tokyo Metropolitan Police were on duty and reportedly watched Abe from all sides during his speech, NHK said.

Abe was Japan’s longest-serving prime minister and has shaped the country’s politics for a generation.

He will be remembered for increasing defense spending, enacting the most dramatic shift in Japanese military policy in 70 years, and his grandiose experiment designed to lift the Japanese economy out of decades of stagnation, known as ‘ Abenomics’.

Tomohiko Taniguchi, a former special adviser to Abe, said the former prime minister was “one of Japan’s most transformative leaders” and described his assassination as the equivalent of the assassination of US President John F. Kennedy.

“I think it will be equivalent to the JFK assassination … It was a day of sadness, grief, disbelief and for me enormous anger. People find it very difficult to digest reality,” Taniguchi said on Friday.