Jewish communities in the US are on high alert after the Texas standoff: ‘Has our community been attacked again?’ 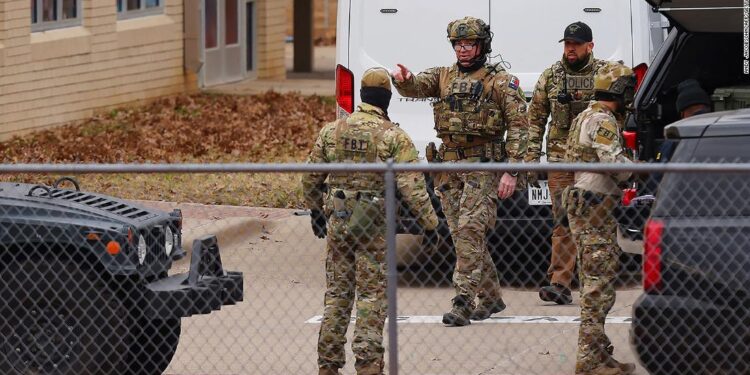 “Suddenly we need to become experts on security,” said Rabbi Joshua Stanton, a senior fellow at the National Jewish Center for Learning and Leadership.

“I didn’t become a rabbi to be an expert in security,” he said. “I became a rabbi to teach, to support, to care, to be in the wider community as a source of love for the world. And now all of a sudden there is a lot of fear. … And if the Jewish community becomes like that attacked casts a (veil) over all of us.”

In an interview on Sunday, Rabbi Rick Jacobs described a “rollercoaster of emotions” that he believed Jews in North America had shared in the past 24 hours.

Saturday was a day filled with “deep concerns and concerns that our community is sadly all too well aware of,” said Jacobs, president of the Union for Reform Judaism, which leads a network of hundreds of Reform synagogues, including Congregation Beth Israel.

Saturday night there was “the most intense relief” when the hostages were released, he said. But people woke up worried again on Sunday: “The question was, are we safe enough to go back to our normal activities,” Jacobs said — activities such as gathering in religious schools or holding scheduled community services to mark Martin Luther King’s birthday. celebrate yr.

“It’s sad that that’s the reality, that so much of our Jewish community doesn’t feel safe in many situations,” Jacobs said. “And yet, what are we? We are a Jewish community that responds to whatever problems or realities we face.”

“To walk into a synagogue today and meet a guard, or some security procedures, to have to show ID and sometimes go through a metal detector, or ask a few questions – frankly, we feel safer going through that kind of experience “, he said.

“This is exactly what we need to do to keep our communities safe.”

The latest high-profile attack on a Jewish community

No one was seriously injured in Colleyville, but the victims of other recent attacks on Jewish congregations have been less fortunate.

Eleven people were killed at the Tree of Life synagogue in Pittsburgh in 2018 when a gunman made anti-Semitic remarks and opened fire on the borough. One person was killed and three others were injured by a gunman in 2019 at the Chabad of Poway synagogue near San Diego. And while not in a synagogue, later that same year, three people were killed by two gunmen at a kosher market in Jersey City, New Jersey, in an attack that authorities said was fueled in part by anti-Semitism.

In Colleyville, while the suspect — identified by the FBI as 44-year-old British citizen Malik Faisal Akram — was holding Jewish believers hostage, FBI Dallas special agent Matthew DeSarno said at a news conference Saturday that authorities believe he was “particularly targeted.” on one issue” that was “not specifically related to the Jewish community”.

Two law enforcement officials told DailyExpertNews investigators that the hostage-taker may have been motivated by a desire for the release of an 86-year-old Pakistani prisoner at a Texas facility after he was convicted in 2010 of attempted murder and armed assault on American officers in Afghanistan.

In a later statement, the FBI described the hostage crisis as a “terrorism-related issue, targeting the Jewish community.

“We never lose sight of the threat extremists pose to the Jewish community and to other religious, racial and ethnic groups,” the statement said.

The threat to Jewish communities is real, Jewish leaders say, pointing to the recent surge in anti-Jewish actions.

Jacobs expressed his gratitude for law enforcement and their work to get the hostages out safely. But he disagreed with any suggestion that the attack was not anti-Semitic.

“They didn’t attack McDonald’s or a mall,” Jacobs said of the suspect. “They found a church, a reformed house of worship, one day when we gathered for prayer and celebration.”

“I’m sorry, if it happened once in a thousand years, you could say it wasn’t an anti-Semitic person,” he said. “But the synagogue’s choice of this hostage-taker and the multitude of things we’ve had to deal with as a community is pretty clear-cut.”

Jonathan A. Greenblatt, CEO and National Director of the Anti-Defamation League, urged officials in a statement to “explore the role that anti-Semitism may have played in motivating the accused.”

In the meantime, synagogues and other Jewish institutions must remain vigilant, Greenblatt said in his statement: “The risks remain high in light of the historic level of anti-Semitism across the country and the spread of anti-Jewish hatred online.”

The ADL will contact local law enforcement agencies in the coming days, Greenblatt said, “to ensure steps are taken to ensure the safety and security of the Jewish community.”

“Is our community under attack again?”

Security is a daily concern for Jewish synagogues today, and many have received training and implemented their own protocols to keep their congregations safe.

In a statement on Sunday, Congregation of Beth Israel Rabbi Charlie Cytron-Walker attributed his survival to the training he and his congregation had received over the years from local law enforcement, the FBI, the ADL and the Secure Community Network (SCN). ), a group that helps Jewish communities across North America develop and implement security protocols.

“We’re alive today because of that education,” Cytron-Walker said.

Brad Orsini, SCN’s senior national security adviser, told DailyExpertNews that the organization has expanded dramatically in recent years following attacks such as those in Pittsburgh, Poway, Jersey City and Monsey, New York, where a man attacked Hasidic Jews at a rabbi’s home during a Hanukkah celebration in 2019.

In the wake of an event like the one in Colleyville, Jewish leaders are seeking both advice and reassurance, he said. They want to know if the event was isolated, if there could be imitators, and if they need to make contingency plans and be vigilant.

The answer to that last question, he said, “is absolutely yes.”

“An incident in Colleyville really affects the entire Jewish community across the country,” he told DailyExpertNews in an interview Sunday after a webinar to educate hundreds of Jewish community leaders, security representatives and others about what happened in Colleyville. “They think back to Pittsburgh, Poway, Monsey, Jersey City – is our community under attack again?”

In response, synagogues would revise their plans with ushers and greeters, Orsini said, while shuls with less sophisticated plans were catching up. Measures could include ensuring temple administrators have remote access to maps that can be easily shared with law enforcement, he said, or surveillance cameras accessible from outside to give first responders a tactical advantage against any threat.

“Most communities are really talking about these issues right now, they’re talking about whether they need to increase security,” he said.

Cities across the country also increased security at synagogues and Jewish community centers to ensure their safety. While there were no credible threats, the Metropolitan Police Department in Washington, DC, increased visibility around places of worship, a department spokesperson told DailyExpertNews.

New York City Police Department similarly committed resources to “key Jewish sites” in the city on Saturday night, Mayor Eric Adams said on Twitter, and Mayor Eric Johnson of Dallas similarly announced that the city’s police were sending additional patrols to synagogues and other locations as a “precautionary measure.”

Rabbi Steve Leder of the Wilshire Boulevard Temple in Los Angeles told DailyExpertNews’s Poppy Harlow on Saturday that he has been in contact with other rabbis and Jewish leaders across the country, underscoring that “we all need to remain vigilant.”

“Of course we are concerned,” he said. “I mean, to be honest, my wife wouldn’t even have me on DailyExpertNews with you…but that can’t stop us from speaking out against this senseless hatred.”

But security isn’t just about cameras, metal detectors and training, said Jacobs, who emphasized the importance of interfaith relationships and noted that Jews aren’t the only faith community being targeted. Over the course of Saturday, he received messages of love and support from people of all faiths, including Christians and Muslims, who condemned the hostage-taker.

“The truth is that Jewish history has had very, very painful periods of anti-Jewish hatred and anti-Semitism,” he said. “And one of the things that feels very unique in 21st century America is that we hear, feel the deep connection” with members of other religions.

Ultimately, Jewish communities cannot be “crippled by fear,” Jacobs added. “That’s to completely surrender our faith community to the haters, and we wouldn’t even consider that.”