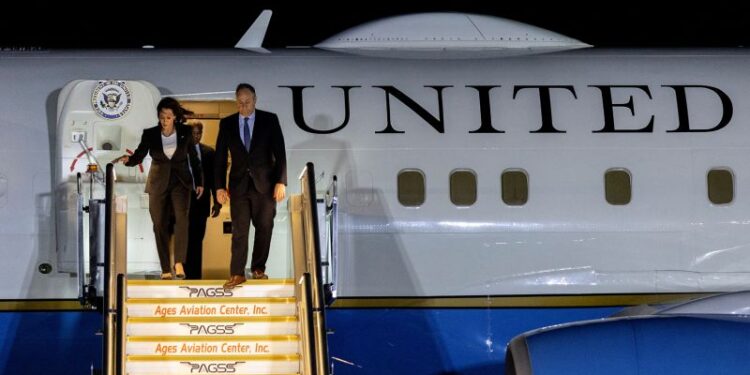 
A Philippine archipelago known for its tropical vacations will become the center of political attention this week when Vice President Kamala Harris becomes the highest-ranking U.S. official to visit the main island.

Palawan is home to scuba diving resorts and a Philippine military base that Harris will visit Tuesday, according to a senior government official, placing her on the edge of the South China Sea, where China has built military bases — some on islands claimed by the Philippines — in one of the most outward signs of its Pacific ambitions.

Harris met with Philippine President Ferdinand Marcos Jr. on Monday, with the partners expected to discuss 21 new projects funded by the United States, including more defensive sites around the Philippines in locations yet to be revealed — an indication of Beijing that Washington forges closer ties with Manila.

The projects are part of the Enhanced Defense Cooperation Agreement (EDCA) between the two countries, which allows U.S. forces to use agreed sites in the Philippines for security exercises and joint military training, the White House said in a statement.

But the defense ties between the US and the Philippines run even deeper.

The country was home to two of the United States military’s largest overseas installations, Clark Air Base and Subic Bay Naval Base, which were transferred to Philippine control in the 1990s. A Mutual Defense Treaty signed in 1951 remains in effect, stipulating that both sides will help defend each other if either is attacked by a third party.

Speaking to reporters on Monday, Harris reaffirmed Washington’s “unwavering” commitment to the pact. “We must always reiterate that we stand with you in defense of rules and norms (in the South China Sea),” Harris said, adding that any attack on Philippine vessels in the South China Sea would invoke mutual US defense commitments.

Sitting next to Harris, Marcos Jr. to reporters, “I’ve said many times that I don’t see a future for the Philippines without the United States, and that stems from its very long relationship with the US.”

Ties between the two countries had frayed under former Philippine President Rodrigo Duterte. who sought closer relations with China during his six years in power.

Gregory Poling, a maritime security expert at the Center for Strategic and International Studies in Washington, said the US and the Philippines are past these “difficult years”.

Poling said Harris’s visit sends a strong message of support to the Philippines without necessarily threatening Beijing, as Harris will be visiting Palawan, which is close to the South China Sea but is not one of the disputed islands.

“The benefit the US will see in the Philippines in sending a message that ‘we stand together in the South China Sea’ far outweighs any modest frustration it will cause in Beijing,” Poling said.

Palawan is known as a haven for scuba diving and island hopping, but it is also home to the Antonio Bautista Air Base in Puerto Princesa, the center of the Philippine military command responsible for defending and patrolling the waters around the Spratly Islands.

The Spratly Islands lie in the southern part of the 1.3 million square mile waterway – almost all of which China claims as its sovereign territory based on its interpretation of historical maps.

According to the Asia Maritime Transparency Initiative, the Philippines occupies nine positions in the Spratly chain, while China occupies seven. But Beijing, which calls the island chain the Nanshas, ​​has built and strengthened many of its claims to the chain, including building military bases at places like Subi Reef, Johnson Reef, Mischief Reef and Fiery Cross Reef.

In contrast, only one of the Philippine-controlled features even has an airstrip, Thitu Reef.

Other neighbors around the resource-rich waterway also claim parts of the area, including Vietnam, Taiwan, Brunei, and Malaysia.

In 2016, a tribunal in The Hague ruled in favor of the Philippines in a maritime dispute, concluding that China has no legal basis to claim heritage rights to most of the South China Sea.

Despite the ruling, Duterte sought to forge closer ties with Beijing and made plans to collaborate on oil and gas exploration in the South China Sea, a move that divided Filipinos over the legitimacy of enabling China’s ambitions in the disputed territory. to make.

However, the exploration agreements were formally terminated in June 2022 due to constitutional challenges and concerns about Philippine sovereignty, former Secretary of State Teddy Locsin Jr. said. before leaving office under Duterte.

Since taking office in June, Marcos Jr. attempted to restore ties with the US and resume friendly communication with China on both economic and security issues.

On the sidelines of last Thursday’s APEC meeting, Marcos Jr. and Chinese leader Xi Jinping agree that maritime issues “do not define the entirety of relations between the Philippines and China,” the Philippine press secretary said.

“Our foreign policy refuses to be trapped by a Cold War mentality. We pursue an independent foreign policy guided by our national interest and commitment to peace,” said Marcos Jr.

As a defensive ally of Washington and a competing claimant over Beijing’s sweeping territorial claims in the South China Sea, the Philippines is critical to both Washington’s strategy in the region and China’s geopolitical rise.

Rommel Banlaoi, president of the Philippine Association for Chinese Studies, said Marcos Jr. is to strengthen and modernize the country’s defense system – with the help of the US – while establishing a friendly dialogue with China to strengthen economic ties with its largest country. trading partner.

During her trip to the Philippines, Harris is expected to make a number of other announcements, including closer U.S. cooperation with Manila on clean energy, cybersecurity, communications and agriculture.

The deals show US intent in the Pacific, but a South China Sea expert said Harris’s trip to the Beijing military base threatens to worsen to the detriment of the Philippines.

“It will put my country, the Philippines, in a precarious and uncomfortable situation vis-à-vis Beijing,” he said. she said.

“I do not see this as beneficial for my country. It’s like provoking Beijing at the expense of my country, and I don’t think this is an enlightened thing that nationalist Filipinos will be happy about.”