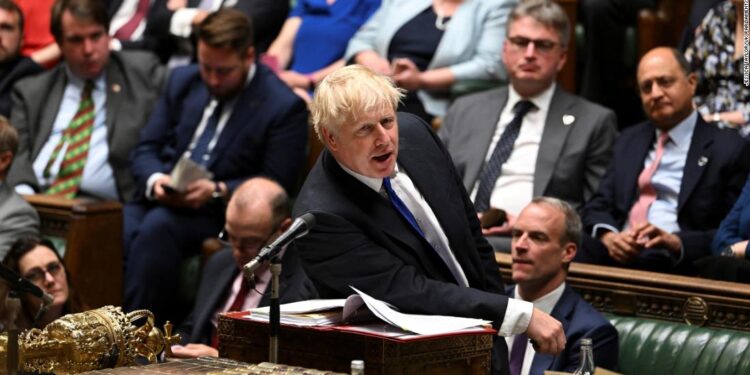 
Boris Johnson was rocked by more resignations on Thursday morning as a growing number of ruling Conservative Party lawmakers tried to force the British Prime Minister from 10 Downing Street.

These are the latest layoffs:

Brandon Lewis: The British Secretary of State for Northern Ireland is the fourth cabinet member to leave his post. In Brandon Lewis’ letter to the Prime Minister, he said that a “decent and responsible government relies on honesty, integrity and mutual respect — it is a matter of deep personal regret that I have to leave the government because I no longer believe those values are complied with.” confirmed.”

Helen Whatley: In her resignation letter, the Treasury Secretary of the Exchequer said she had been advocating for Johnson to continue in recent months, but “there are only so many times when you can apologize and move on.”

Damian Hinds: British Security Secretary Damian Hinds announced on Thursday that he was stepping down from his post in Johnson’s government. “It shouldn’t cost the resignation of dozens of colleagues, but for our country, and for confidence in our democracy, we need a change of leadership,” he tweeted, attaching his letter of resignation to the post.

George Freeman: According to Britain’s national news agency PA Media, he resigned from his position as the UK’s Science, Research and Innovation Minister on Thursday.

In his letter of resignation to Johnson, he said “the chaos in your cabinet and No. 10 this month is destroying our credibility.”

Guy Opperman: The British Secretary of State, who served as Parliamentary Under Secretary of State at the Department of Work and Pensions, resigned on Thursday. “I’ve given you ample opportunity to show real change,” Opperman said in his letter of resignation to Johnson. “Unfortunately, recent events have clearly shown that government simply cannot function when you are in charge.”

Chris Philip: He resigned from his role as the UK’s Technology and Digital Economy Minister, saying: “Given the events of the past weeks and months I therefore think you should resign as Prime Minister and it follows that I cannot hold any position in your government. fulfill.” longer.”

James Cartlidge: The deputy minister, who served as Parliamentary Undersecretary of State to the Ministry of Justice, became the 53rd member of the government to resign.

“I felt obliged to remain in this post given the very challenging circumstances facing the criminal courts. I felt that there should be some semblance of government in this crucial arm of our constitutions. But the position is clearly untenable,” he said in his resignation letter shared on Thursday.