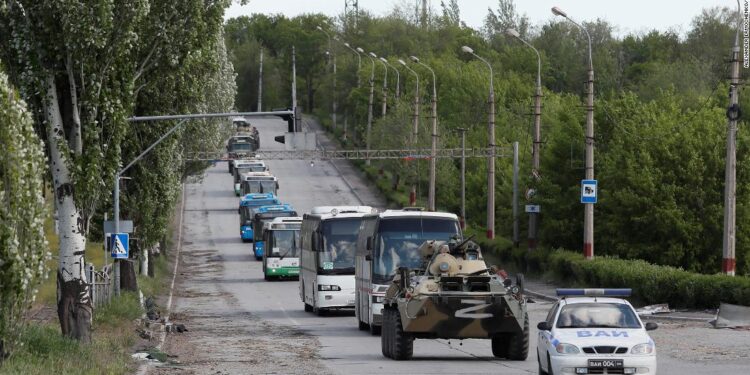 Ukrainian military officials say 12 people were killed in the eastern region of Luhansk and 60 properties were destroyed by Russian bombing on Thursday.

But, they note, Russian forces appear to have made no progress in the past day on the main front lines in Luhansk and Donetsk.

Civilian deaths: The chief of military administration in Luhansk, Serhii Hayday, said 12 people were killed in the city of Severodonetsk.

Hayday said many homes throughout the area have been destroyed.

Keep lines: Despite the intense bombardment, the Ukrainians say their defenses are holding up. “The attack on Severodonetsk was unsuccessful. The Russians suffered personnel losses and withdrew,” Hayday said.

State of the city: Oleksandr Striuk, head of the military administration of the city of Severodonetsk, said there are still up to 15,000 civilians in the city, living in air raid shelters and cellars.

“The city has been without electricity, internet and communications for almost a week,” he said. “About 70% of the city’s housing stock was destroyed.”

Russians push through: According to the Ukrainian General Staff, Russian troops south of Severodonetsk tried to break through around the town of Toshkivka.

In their efforts to complete the seizure of Luhansk, the Russians have also attempted to penetrate the small town of Vyskryva. If they succeed, they would also be closer to another target: the city of Bakhmut in Donetsk, which has become a hub for the Ukrainian army trying to resupply its defensive positions.

On the Donetsk front, settlements north of Sloviansk were under constant shelling.

Further north in the Kharkiv region, where Ukrainian forces have launched a counter-offensive in recent weeks, Russian shelling continues in areas recaptured by Ukrainian forces, according to the Ukrainian military. The city itself has seen much less incoming fire.