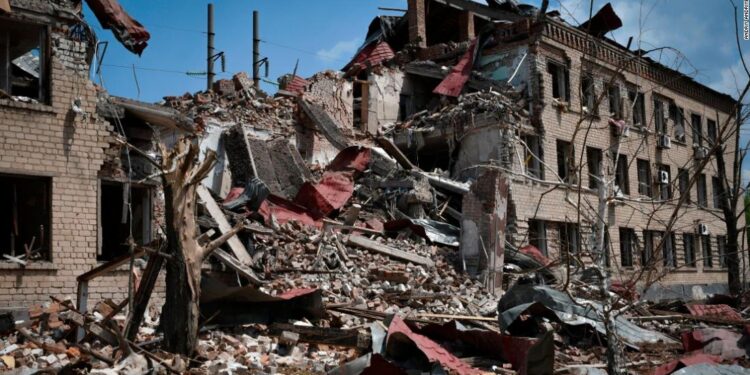 Fighting continues in the Severodonetsk region of eastern Ukraine, where the situation is “even more difficult” and “the enemy continues to attack,” the chief of military administration of the Luhansk region said on Sunday.

Serhiy Hayday said in a statement that 60 homes in the region have been destroyed and two people have been found dead under the rubble.

He said one of the victims was a girl who was killed on Saturday when a Russian shell hit a high-rise building in Lysychansk, in a strike that left four others injured. A movie theater and 22 houses were also damaged in an air raid.

Separately, the General Staff of the Armed Forces of Ukraine said in an operational update on Sunday that Russia has “conducted assault operations in the area of ​​the city of Severodonetsk”, where “the fighting continues”.

In Sloviansk, about 60 kilometers (37 miles) to the west, Russia conducted “intensive reconnaissance” on the city and suburbs, conducted air strikes in the Dovhenke area and also artillery shelled civilian infrastructure in nearby Bohorodychne and Sviatohirsk, according to the statement of the Ukrainian army.

Elsewhere, the military reported new Russian attacks on civilian infrastructure in towns and villages between Ukraine’s second-largest city, Kharkiv, and the Russian border. Ruski Tyshky, Petrivka and Ternova were among the affected locations. The Russian military is also engaged in remote mining operations in those areas, according to the statement.