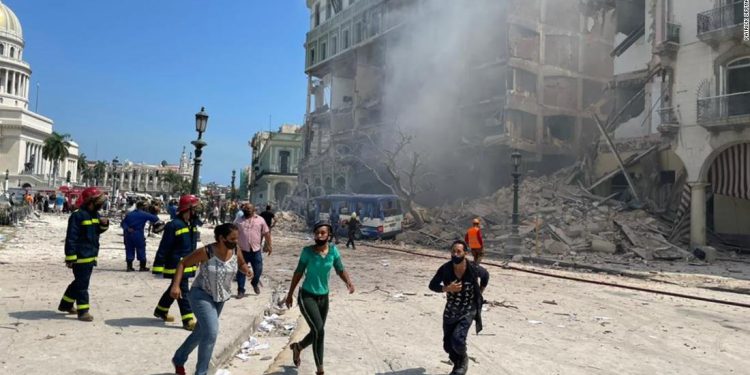 The Hotel Saratoga in Havana – destroyed this Friday after a major explosion – has a long history. Located a stone’s throw from the Capitol, the building was built at the end of the 19th century and in the 1930s it was one of the most important hotels in the city.

The building that houses the Hotel Saratoga, according to historian Carlos Venegas, was designed to house warehouses, homes, and guest houses. According to the hotel, it was to be built around 1879-1880 by the Spanish merchant Gregorio Palacios.

Born in Santander, Gregorio Palacios was one of the wealthiest city owners in Havana and one of the biggest contributors to the treasury, explains the historian, according to the hotel. In 1879 he signed the contract for the construction of the three-storey building.

The Hotel Saratoga, which used to be located on Monte street, moved to this building on Prado street around 1933.

The facade of the hotel retains some original features. Elements of the building such as bars, wooden latticework, marble stairs and columns show how it was originally, despite the major changes that have taken place within its doors.

The origin of the hotel’s name has not been verified, the hotel says, but it may be related to Saratoga, in upstate New York, where a thermal water spa used to be a summer resort.

“Very close to this venue, there were significant battles in the US War of Independence,” the hotel says, adding that “perhaps the owners’ relationship with the event may have influenced the choice of name.”

Listed in tourist guides as one of the most prominent in the Cuban capital as early as 1935, one of the hotel’s landmarks is part of the history of the Anacaonas, the first all-female orchestra in the country.

The musical shows on the terrace in the first half of the 20th century attracted a large number of people to the surroundings of the building and it is precisely in that corner that the orchestra started.

Personalities such as the writer Rafael Alberti have passed through Hotel Saratoga, whose visit is framed in a memorial plaque of the building, which reopened as a hotel in 2005.

Read more about the hotel in Spanish here.